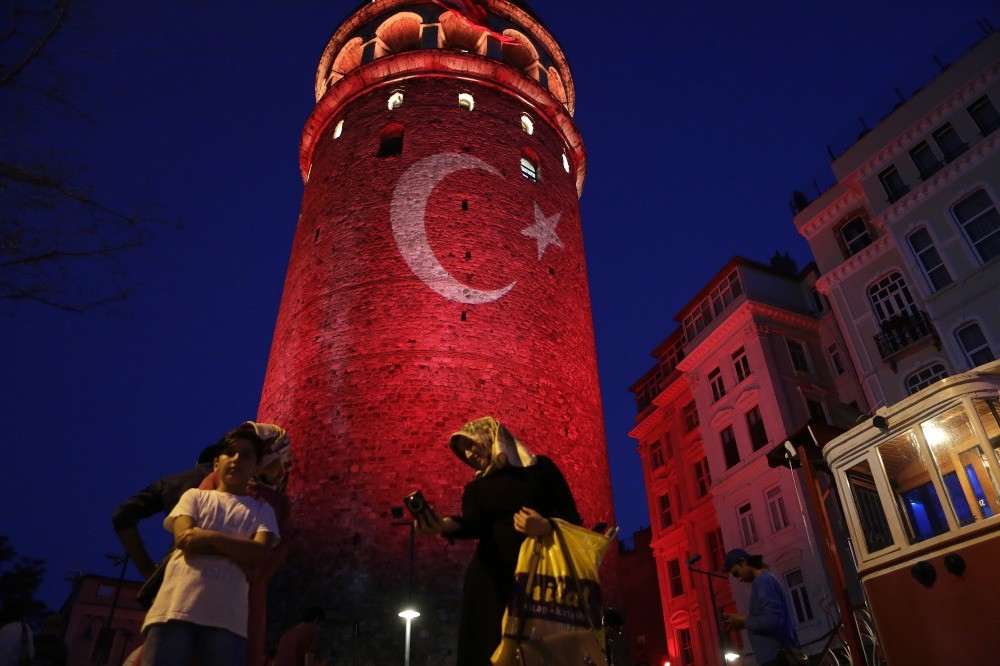 People taking photos at the iconic Galata Tower, illuminated in the colors of the Turkish flag to protest the coup attempt, Istanbul, July 30.
by Yahya Bostan Aug 01, 2016 12:00 am

Gülen attempted to straitjacket Turkey. However, his dark ambitions ran into a stone wall formed by Turkish people, who resisted tanks to protect their country, future and democracy

It is better to speak frankly. The Western media's approach to the democracy resistance against the atrocious military coup attempt on July 15 was disrespectful. A few writers with good sense highlighted the civilian spirit in Turkey. However, the majority paid more attention to the future of the coup forces that killed 248 people, bombed Parliament and attempted to assassinate President Recep Tayyip Erdoğan instead of remembering the civilians who were killed. Needless to say, this hypocritical demeanor has disappointed people in Turkey, who proved their adequacy and courage by risking their lives for the sake of democracy.

During the process, some groups reluctantly condemning the coup resorted to a kind of cunningness that did not escape attention. There are many instances of it, but I would like to mention the case of Elif Şafak. In an article she wrote for the New Yorker, she depicts the dreadfulness the coup attempt evoked in a naive tone. She emphasizes that Turkey narrowly escaped a dark period, but then infers that the civilian will governing Turkey came to have some anti-democratic inclinations and Turkey is approaching a period that will be even darker than if the coup had succeeded.

I object to this approach, which underestimates the Turkish people's democracy victory.

Firstly, what has happened since July 15 refutes the argument that Turkey will enter a darker period. The coup attempt organized by the Gülenist Terror Organization (FETÖ) trivialized all the other conflicts in the country's politics. Erdoğan met with two opposition leaders for the first time in the Presidential Palace since the leaders had refused to visit his palace beforehand. This meeting yielded significant results, including the re-initiation of work on a new draft constitution and cooperation between the opposition and ruling party.

Both the ruling party and the opposition prioritized defending democracy by ceasing to blame each other. The state of emergency, which was implemented to cleanse Gülenist public officials in the state, was approved by Parliament, which was bombed on the night of July 15, with the votes of the Justice and Development Party (AK Party), Republican People's Party (CHP) and Nationalist Movement Party (MHP). As a result of recovering relations between the parties following the coup attempt, Erdoğan withdrew all the lawsuits he had opened against the opposition chairmen on the grounds of insults. Emphasizing the importance of civil politics, Erdoğan indicated that a new period of was beginning. All these developments show that those worrying about what would happen to democracy in Turkey were alarmed by an ill-timed apprehension.

Secondly, those who argue that Turkey will enter a darker period either underestimate coups or do not know what a coup means. They do not take into account the fascist waves, extrajudicial executions, suspended laws and forgotten human rights introduced in Turkey's past coup periods.

Besides, the danger we have overcome is not a conventional coup attempt. This coup attempt had an important difference from the coups and coup attempts we experienced beforehand. In previous examples, the military staged a coup under the pretense of protecting the nation and the system. After a while, they handed over control back to civilians in a controlled way. However, July 15 was motivated to have Fethullah Gülen seize Turkey through a military intervention and change the democratic regime. If the July 15 coup attempt had succeeded, nothing in Turkey would have been the same again.

The claim that Gülen attempted to return to Turkey like Ayatollah Ruhollah Khomeini returned to Iran is not a joke. Journalist Fehmi Koru, who acted as a messenger between the government and Gülen during the Dec. 17 process and whom Gülen trusts, in my opinion, explains why Gülenists attempted to stage a coup with an interesting reason. According to Koru, as Gülen has aged, he wants to see the Gülenist infiltration in the state that has been ongoing for 40 years bear fruit before he dies. So, had the coup attempt succeeded, Gülen would have returned to Turkey a conqueror. But what kind of a place would Turkey become under Gülen's captivity?

The former implementations of Gülenists give us some clues about their designs on Turkey. First of all, Turkey would have been ruled by a deviant religious functionary, who is seen as the Mahdi without any imperfections by his disciples. As in the Ergenekon and Balyoz (Sledgehammer) trials and the Dec. 17 and Dec. 25 investigations, Gülenist judges would have penalized the people refusing to obey Gülen with false evidence and indictments, the darkness of Gülen's legal order would descend over the country. Hundreds of journalists would be imprisoned due to unpublished books, as they already did to the journalist Nedim Şener, and those criticizing Gülen would be imprisoned for being member sof a terrorist group. As previous examples show, no one would have had a private life since Gülenists would have wiretapped everyone, and they would have even placed cameras in the bedrooms of non-obeying commanders' daughters as they did before in the Ergenekon case. Those running the economy would not have taken a single step without informing Gülen, and they would act with Gülen's instructions as previous telephone tapes have shown. Citizens would pay about 10 percent of their income to Gülen's organization instead of paying taxes, but transparency and accountability would bring arbitrariness since records would not be kept. Unfortunately, there would be no elections in the country, and the voters, who have been casting ballots for 100 years, would have to wait for Gülen's death for the next elections.

All these instances are things Gülenists practiced beforehand. What we went through on the night of July 15 was Gülen's worst plot. Blood was shed, civilians were killed. It is hard to estimate how much blood would be shed had Gülen succeeded to seize Turkey.

What I wrote might sound like a poorly written dystopia inspired by George Orwell's "1984," but unfortunately, it is not fiction. Gülen attempted to straitjacket Turkey, but his dark ambitions ran into a brick wall formed by the people who resisted tanks to protect their country, future and democracy.
Last Update: Aug 01, 2016 1:39 am
RELATED TOPICS