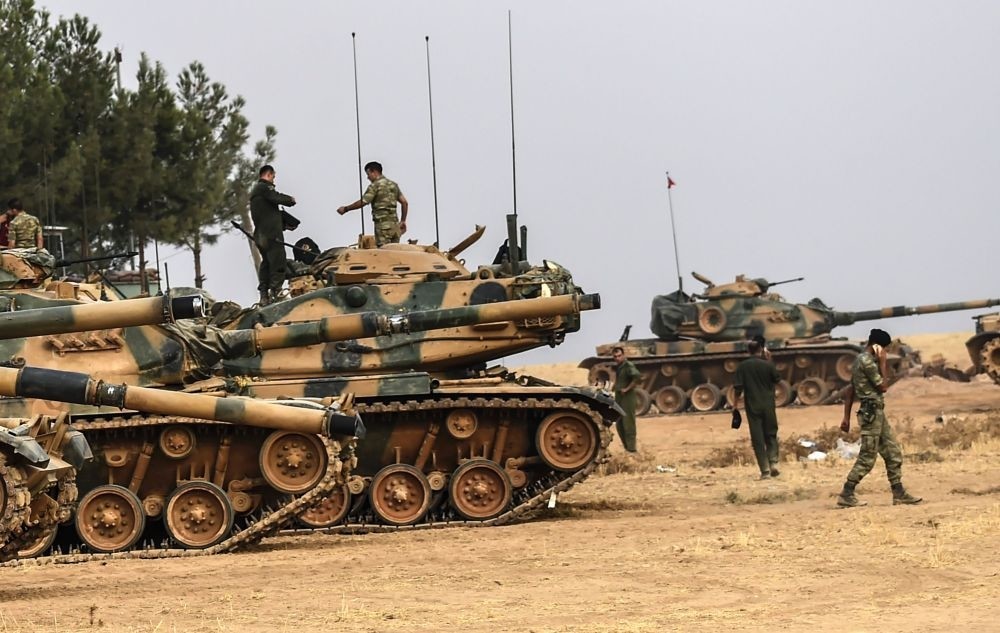 Turkish soldiers standing by tanks at the Karkamu0131u015f district of Turkey's southeastern province of Gaziantep on its border with Syria, Aug. 25.
by Yahya Bostan Sep 07, 2016 12:00 am

In the wake of Operation Euphrates Shield, the United States has one thing left to do: Think long and hard about their Syria policy

Having launched Operation Euphrates Shield on Aug. 24 to facilitate a ground offensive by the Free Syrian Army (FSA) against DAESH, Turkey removed DAESH from the area stretching between Jarablus and Azaz. As such, the operation's initial stage has been completed.

Attending the G20 Hangzhou Summit in China, President Recep Tayyip Erdoğan announced that the second stage would involve the creation of a safe zone 90 kilometers wide and 45 kilometers deep - which means that the FSA will move against DAESH in al-Bab and the People's Protection Units (YPG) in Manbij. According to sources, Erdoğan also told U.S. President Barack Obama and his Russian counterpart Vladimir Putin that the liberated area should be declared a no-fly zone to ease the pressure on Turkey and the European Union to accommodate more refugees.

The Turkish incursion's success received positive feedback from the international media, which hailed Operation Euphrates Shield as a quick and effective step against terrorism. Moving forward, the offensive will mount additional pressure on terrorist groups including DAESH and the YPG.

In recent years, the Obama administration had been reluctant to support the train-and-equip program and instead opted to provide air cover to YPG forces on the ground - helping the group establish a de facto monopoly over the war against DAESH. Operation Euphrates Shield, in turn, made it clear that the moderate rebels were more than capable of defeating DAESH.

The emergence of an alternative ground force has had a notable effect on YPG militants. In recent days, various groups have been involved in skirmishes among the YPG-led Syrian Democratic Forces (SDF) ranks. Having kept silent for fear of U.S. retribution, moderates have started challenging the YPG's power grab and war crimes. In Tal Abyad, local Arabs have clashed with YPG forces. Meanwhile, a number of Arab tribes have left the SDF after refusing to fight Turkey alongside the YPG. It's pretty clear that there will be more turmoil among SDF ranks once the Turkish-backed FSA gain control over al-Bab and Manbij to deny the PKK's Syrian franchise an opportunity to unite their so-called cantons. Over the next few weeks, we will hear more from Arabs, Turkmens and Kurds who have been disgruntled with the YPG's racist attitude and crimes.

Needless to say, success in northern Syria means additional risks for Turkey. While the PKK stepped up its attacks in an effort to distract Turkey's attention from the Syrian crisis, the group's political wing, the Peoples' Democratic Party (HDP), calls for hunger strikes and street protests citing the supposed isolation of PKK leader Abdullah Öcalan. It wouldn't be a huge surprise if the PKK perpetrates more terror attacks and tries to provoke street violence once FSA forces reach the YPG-controlled town of Manbij. Likewise, Turkey will ostensibly experience more problems with the United States, which is unwilling to stop supporting the YPG in the area.

The Turkish-backed offensive will also help break DAESH's will. Having been in decline for some time, the organization's leadership might find it increasingly difficult, especially after losing Jarablus and the border with Turkey, to secure the loyalty of their members. According to experts, DAESH might seek to perpetrate even larger attacks on Turkish soil in an effort to stop the disintegration and to showcase its power.

Knowing full well that losing al-Bab will lead to the loss of Raqqa, DAESH will do everything in its power to stop the operation. As such, Turkey must take into consideration an understandable decline in the operation's pace and act with more caution in the future.

Operation Euphrates Shield's success also raises questions about the international coalition's level of commitment to defeating DAESH until now. At this time, Baghdad, the peshmerga, the moderate rebels and the SDF are fighting against DAESH on the ground with air support from the coalition. Even though the international effort dealt some blows to DAESH in Syria and Iraq, progress has been extremely slow.

It took months for Ramadi to be liberated from DAESH terrorists. A subsequent effort to liberate Mosul has been on hold for months. Meanwhile, the town of Manbij took 73 days to liberate - compared to 36 hours spent to control Jarablus by Turkish-backed FSA forces. The fact that the international coalition made slower progress than Operation Euphrates Shield begs the question whether airstrikes were the right option and if the partners on the ground were capable of performing the task.

In the wake of Operation Euphrates Shield, the United States has one thing left to do: Think long and hard about their Syria policy.
RELATED TOPICS