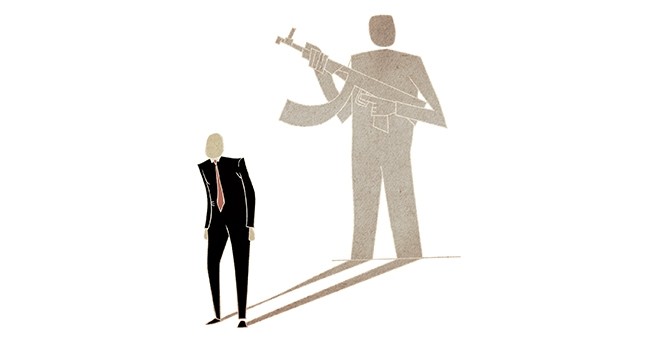 The detention of HDP deputies, who support the PKK terrorist organization that has been killing civilians in Turkey for decades, is a legal measure that must be taken by the Turkish court

The detention of Peoples' Democratic Party (HDP) co-chairs Selahattin Demirtaş and Figen Yüksekdağ along with nine other deputies received negative responses from Washington and Brussels. It would appear that U.S. and EU officials consider the detentions a threat to the future of Turkish democracy and an anomaly.

Are they right? Let me cut to the chase: The detention of HDP deputies is a sign that the justice system in Turkey is rapidly normalizing. It means that universal principles of law are finally being applied. I can already hear some of my readers objecting, citing problems with putting elected officials behind bars. My recommendation to them is to read this column to the end. You will see what I mean.

Turkey's 35-year fight against the PKK, a globally recognized terrorist organization, can be divided into three periods. The first stage, which begins with the initial terror attacks in 1984 and continues until 2003, was marked by tight security measures and human rights violations. At the time, Turkey's legal system was not on the same page as universal principles. Some acts, which were permitted in western provinces, were denied to citizens in the east. In other words, the legal system did not function normally - a problem that many people chose to ignore in the wake of bloodshed and violence.

The Justice and Development Party's (AK Party) rise to power marked the beginning of a transition period. The newly-elected government's first order of business was to lift the state of emergency. As the situation quickly normalized, Turkey took decisive steps toward EU membership. Keeping in mind that the PKK had gone into hiatus after the capture of its founder Abdullah Öcalan in 1999, the government implemented democratic reforms to allow Kurdish-language education and political campaigns, the reinstatement of Kurdish names to communities and the launch of Kurdish-language TV stations. Although the PKK resumed violence in 2004, Ankara remained committed to democratization and reforms.

The measures implemented by Ankara in 2003-2009 lay the groundwork for the second stage, which began in 2009 with the National Unity and Fraternity Project, reached its zenith with the reconciliation process and ended with the PKK's return to violence in July 2015. To be clear, the six-year period went down in the history of Turkish democracy as a golden age. For the first time in history, the government took a huge political risk to try and defeat the PKK through dialogue rather than military solutions. The goal was to end the bloodshed and rehabilitate PKK militants - which was partially reached. With the hope for peace stronger than ever, the Turkish public threw its weight behind the disarmament talks and proved willing to ignore some obvious mistakes to keep talking. What were some of the mistakes made during this period? In a way, the anomalies observed in 2009-2015 were the exact opposite of what happened during the first stage. In the 1990s, many rights and liberties enjoyed in the west were severely restricted in the east. In contrast, during the reconciliation process, some criminal acts that would be punished in the west were ignored by the authorities in the east. Although PKK terrorists imposed roadblocks, torched vehicles and disturbed public order, they got a free pass as long as they did not kill anybody. The authorities justified their leniency with reference to their commitment to dialogue and giving peace a chance. However, the situation in Syria gradually changed the calculus in Turkey and the reconciliation process came to an end with the PKK's return to violence.

Consequently, in July 2015, Turkey's counterterrorism campaign entered its third stage - which could be described as a "third way" between the overreach of the 1990s and the extreme compromises made during the reconciliation process. In this new period, the authorities launched a series of security operations without human rights violations. Turkish citizens across the country enjoyed the same rights and liberties no matter where they were living. Unwilling to punish people in the west and letting others in the east walk for the same acts, Ankara finally applied universal legal principles to all citizens. In other words, the legal system is normalizing.

Let us now take a closer look at the detentions of HDP deputies. HDP Co-Chair Demirtaş in October 2014 made a reckless statement to trigger a wave of violence that left 55 innocent people dead. His colleague Yüksekdağ said in a public event, "The YPG has our backs," to reveal her party's connection with the PKK's Syrian franchise. Faysal Sarıyıldız was caught transporting a PKK courier and weapons with his personal vehicle. Nursel Aydoğan helped two PKK terrorists receive medical assistance and escape from the authorities. Ferhat Encü provoked a crowd to attack a local governor. The same acts would be considered criminal offenses anywhere in the world.

Although the deputies in question could escape justice thanks to their legal immunity at the time, the court system started taking necessary steps after Parliament passed a bill lifting the immunities of all deputies, regardless of party affiliation, with pending charges. When the bill was passed with the support of the AK Party, the opposition Republican People's Party (CHP) and Nationalist Movement Party (MHP), all deputies covered by the legislation were asked by the courts to testify. Former CHP Chairman Deniz Baykal, MHP Chairman Devlet Bahçeli and a number of AK Party deputies appeared in court to provide testimony, while HDP deputies refused to testify.

In a normal legal system, contempt of court leads to an arrest warrant in order to facilitate the continuation of judicial proceedings - which is why the measures taken against certain HDP deputies were the right thing to do. Unlike in the 1990s and the early 2010s, the Turkish legal system is normalizing. Anybody willing to leave aside their prejudices can see what is going on.
RELATED TOPICS