Turkish troops should be stationed in Sinjar 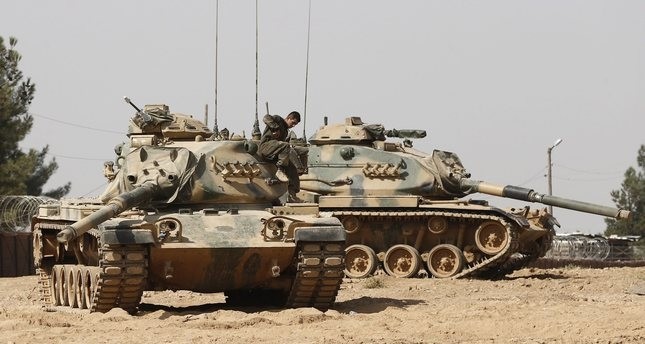 A Turkish soldier on his tank as they prepare for a military operation at the Syrian border as part of their offensive against the Daesh militant group in Syria. (EPA Photo)
by Yahya Bostan Nov 14, 2016 12:00 am

In recent months, Turkey formed two security corridors to neutralize threats against its national security in a neighborhood with Daesh, PKK, People's Protection Units (YPG), Hashd al-Shaabi and al-Nusra terrorists. The first line of defense was established in northern Syria, where the Turkish Armed Forces (TSK), in cooperation with the Free Syrian Army (FSA), removed Daesh from the border and captured the group's spiritual capital Dabiq. Now the moderate forces are advancing toward al-Bab, Daesh's second most important city in Syria.

Let's take a step back and provide some background on Operation Euphrates Shield. In recent weeks, progress had been slow due to a disruption in the Turkish air campaign following an airstrike that left 200 YPG militants dead. While the above mentioned airstrike stopped the YPG's progress toward al-Bab, the Assad regime responded by threatening to shoot down Turkish aircraft entering Syrian airspace - mainly to stop the FSA from mounting pressure on Aleppo after liberating al-Bab. Although Moscow refrained from siding with Damascus publicly, Turkish officials maintained that the Kremlin saw eye to eye with the regime on Aleppo. During U.S. Chairman of the Joint Chiefs of Staff Joseph Dunford's visit to the Turkish capital, Ankara requested air support from Washington - a request that was turned down citing U.S. airstrikes against regime troops in the past. According to Turkish officials, policy makers in Ankara considered Washington's refusal to play ball as a sign of concerns shared by Moscow, Washington and Damascus about Euphrates Shield. To expedite the liberation of al-Bab, Turkey took two steps: First, Turkish tanks started supporting the FSA more actively. At the same time, the air force launched airstrikes against Daesh and the YPG targets around al-Bab to neutralize threats against Turkish military advisers on the ground. Having regained momentum, the rebels are close to reaching al-Bab.

The second line of defense was formed in northern Iraq as Turkish troops were deployed to Bashiqa, a town outside Mosul, to train local anti-Daesh forces. Although Baghdad, bowing to pressure from Iran, raised objections about the presence of Turkish troops in the area, Camp Bashiqa was primarily designed to protect the Kurdistan Regional Government (KRG) from Daesh attacks. As a matter of fact, the base came under attack by Daesh several times. However, Turkey and the KRG's priorities started to change as the offensive to liberate Mosul kicked off. As Daesh lost ground, two terrorist groups emerged as primary threats.

Having expanded its control in northern Iraq under the pretext of fighting Daesh, the PKK entered Sinjar, a town northwest of Mosul, to fill the power vacuum after the defeat of Daesh. To make matters worse, around 500 PKK militants joined the operation in Sinjar and their salaries were paid by Baghdad. In the wake of the latest developments, tensions between the PKK and Irbil escalated. According to Turkish security sources, the PKK leadership desperately wants to turn Sinjar into a stronghold like Mount Qandil. At the same time, the group sided with Talabani to participate in operations in Kirkuk.

The second emerging threat has been the Hashd al-Shaabi - the Shiite version of Daesh. For some time, the group has been itching to take over Tal Afar under Turkey's watchful gaze. Due to Ankara's concerns, Washington contacted Baghdad to request that the Hashd al-Shaabi be kept away from Tal Afar. Although Iraq's Haider aş-Abadi reassured Turkey and the U.S., there has been no progress on the ground.

The million-dollar question is how Turkey can adapt to regional changes and respond to emerging threats. Before taking any concrete steps, Turkish policy makers want to make sure that their actions would protect their interests and make Turkey more secure. Although Camp Bashiqa was formed as a safeguard against Daesh, Turkey has no choice but to consider military options against the PKK and the Hashd al-Shaabi. At this point, forming a new military base in the Sinjar-Tal Afar line would serve not only Turkey's interests but also receive the KRG's support.If a new military base is formed, Ankara may be able to prevent terrorists from taking more land and stop the PKK from sending militants and weapons to Turkey via Silopi. A new military base would also address Irbil's concerns and help keep safe the Turkmen community in the area. As part of the same plan, Turkey should reach out to the Yazidis and other minority groups to provide them financial support and explain what it is trying to accomplish.
Last Update: Nov 14, 2016 7:02 pm
RELATED TOPICS