Why is the PKK playing dead? 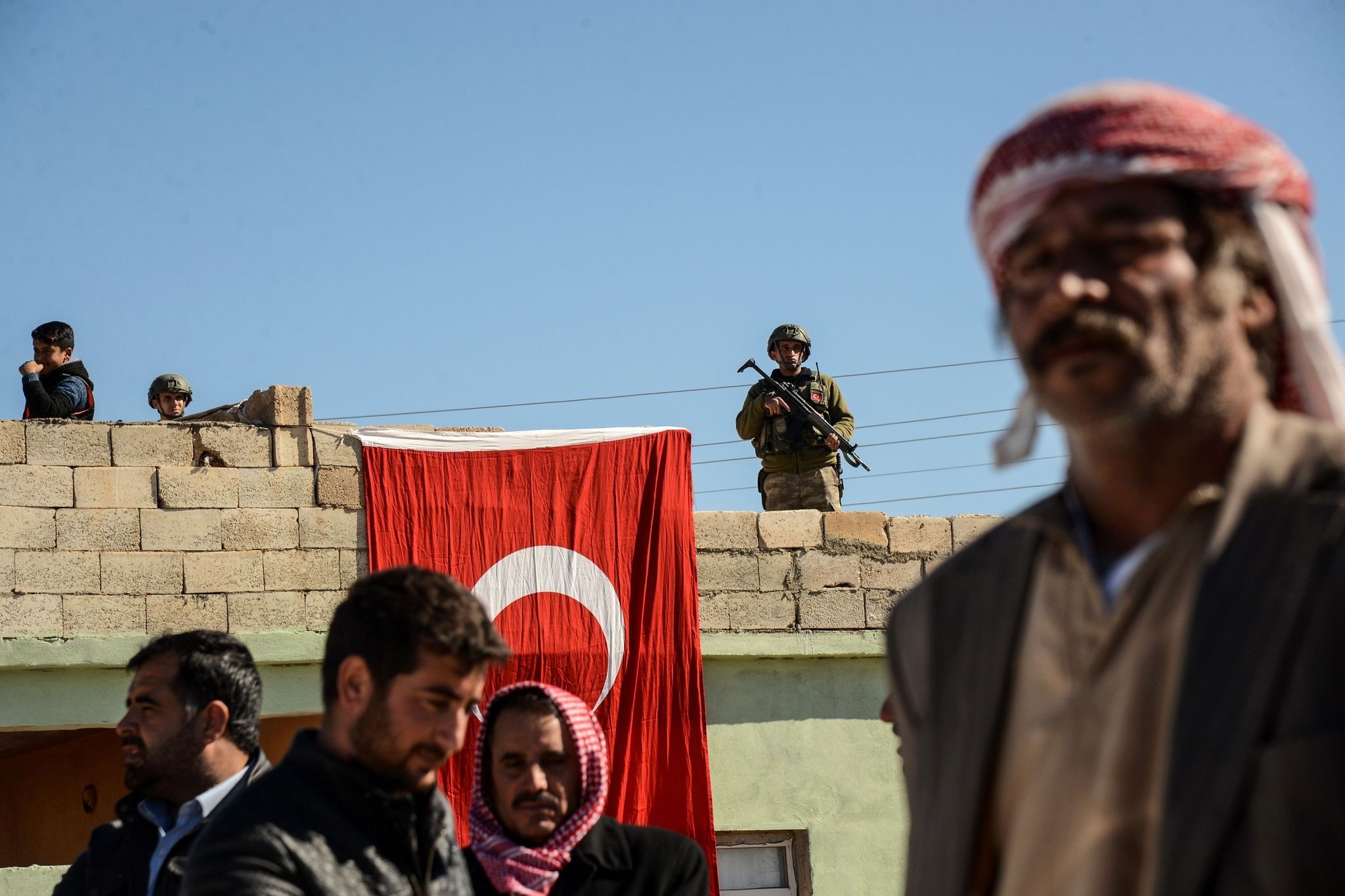 A Turkish soldier standing guard as Interior Minister Soylu visits the family of a victim killed in Fridayu2019s PKK attack in the southeastern city of u015eanlu0131urfa, Feb. 18.
by Yahya Bostan Feb 20, 2017 12:00 am

Friday's terror attack in the southeastern city of Şanlıurfa was a clear message from the PKK to Turkey which is preparing to march into Manbij or Raqqa against terrorist groups such as the outlawed group's Syrian franchises, the PYD and YPG

There is no doubt that the PKK, a terrorist organization best known for their attacks against Turkey, remains one of the most notorious groups in the world. Since 1984, tens of thousands of people, mostly civilians, have lost their lives in PKK assaults. Although the group has been designated a terrorist organization by the United States and the European Union, neither party considers fighting the PKK a priority – provided that their own citizens are not targeted.

Although PKK militants have traditionally operated in the Turkish countryside, the recent acquisition of high-tech equipment by the security forces forced the group to adopt a new strategy involving attacks in urban areas and against civilian targets. Although the international media covered extensively a terror attack by Daesh, which killed 39 people in a popular nightclub on New Year's Eve, another deadly attack, which claimed 41 lives in December, was perpetrated by a PKK suicide bomber.

Nowadays, however, the PKK is playing dead. In recent weeks, the group suddenly stopped attacks against Turkey. A terror attack that killed an 11-year-old child in Şanlıurfa last week, does not refute this claim. I will talk about the most recent PKK attack below, but let us first focus on the three developments that forces the terrorists to pause.

In July 2015, the PKK unilaterally ended the reconciliation process in light of their accomplishments in Syria, a steady supply of weapons from Washington and Turkey's commitment to giving peace a chance. The group's subsequent efforts to turn Turkey's cities into a battlefield proved terribly misguided, as the Turkish security forces cut the PKK leadership's ties with their operatives in the countryside and urban areas to conduct a sweep of neighborhoods targeted by the militants. At the same time, the courts took decisive action against political bodies that provided support to the PKK or were affiliated with the group. The widely-popular security operations pinned down the terrorists and forced them to keep silent in an effort to regroup.

To be clear, the terrorists resort to the same tactics as Daesh – which is also weakening. No longer do the PKK's leaders in northern Iraq send their uniformed terrorists to do their dirty work. Instead, the deadly job has been outsourced to bomb makers who kill civilians en masse.

Another reason why the PKK appears to have ceased attacks against Turkey is related to the upcoming constitutional referendum. On April 16, millions of Turkish citizens will go to the polls to vote on a constitutional reform package which was supported by the Justice and Development Party (AK Party) and Nationalist Movement Party (MHP) in Parliament. The PKK leadership recently expressed concern that the proposed changes to Turkey's system of government will make the country stronger. Simply put, the terrorists believe that political stability will hurt their interests – which is why they desperately and openly support the "no" campaign. In a recent statement, a senior PKK leader urged their supporters to oppose constitutional changes. Provided that a new wave of attacks could hurt the "no" campaign, PKK militants have gone into hiatus. However, there is no question that the group will ramp up attacks against Turkey regardless of the constitutional referendum's outcome.

The third and most important reason why the PKK has been keeping still is related to the situation in Syria. Having been supported by the Obama administration, the group is trying to figure out what U.S. President Donald Trump wants to do. In recent years, Washington offered to fight the PKK together with the Turks provided that Turkey would pledge not to target the People's Protection Units (YPG), the PKK's armed Syrian franchise. If Turkey agreed to the terms, the Barack Obama administration would prevent the YPG from posing a threat against their NATO ally.

For years, Turkey sent the exact same message to Washington: Refrain from working with the YPG, which is a terrorist organization, and stop trying to defeat terrorism by enlisting the services of terrorists themselves.

Nowadays, the Trump administration is working on a new Syria road map. Since the inauguration, Mr. Trump has rejected the Obama plan and instructed the Pentagon to come up with a new strategy. At the same time, the White House announced that the administration would move to set up safe zones in Syria. As the Pentagon works on a new plan, Ankara and Washington continue talks on the impending operation to liberate Raqqa from Daesh – just as the Turks prepare to wrap up the al-Bab operation. Over the next weeks, it will become clear how the terrorist "capital" will be liberated, where safe zones will be set up, and what the YPG's future looks like.

As the Turks engage in negotiations with the United States, the PKK leadership is carefully monitoring the situation and avoiding high-profile attacks. If terror attacks stop, they believe, they could be forgotten. In other words, the PKK leaders want to make sure that the Trump administration has no reason to establish that they are indeed terrorists. As such, their plan is to just wait for the time being in the hope that they could secure U.S. military support and convince Washington to establish safe zones in the YPG-controlled parts of the country.

So why did the PKK kill civilians in Şanlıurfa last week? Again, the answer is related to the al-Bab operation. The Turkish military nearly completed the operation and will presumably advance toward Manbij or Raqqa next. As a matter of fact, YPG militants have already started digging trenches in the outskirts of Manbij. For the Turks, the PKK's message was clear: If you march against Manbij, we will unleash hell.

Under the circumstances, there are a few steps that Ankara could realistically take: Any message that terrorists are trying to communicate should be ignored as the military continues to secure our borders. By engaging the Trump administration, Turkey should seek to stop U.S. support to the YPG. We must dismiss the U.S. claim that the PKK and the YPG are two distinct entities and their message that YPG militants are harmless. One way or another, Syria and the rest of the Middle East will be governed by a new set of rules. Turkey's priority must be to make sure that there is no room whatsoever for terrorists in the new regional order.
Last Update: Feb 20, 2017 1:03 am
RELATED TOPICS