US gets back in the Syria game 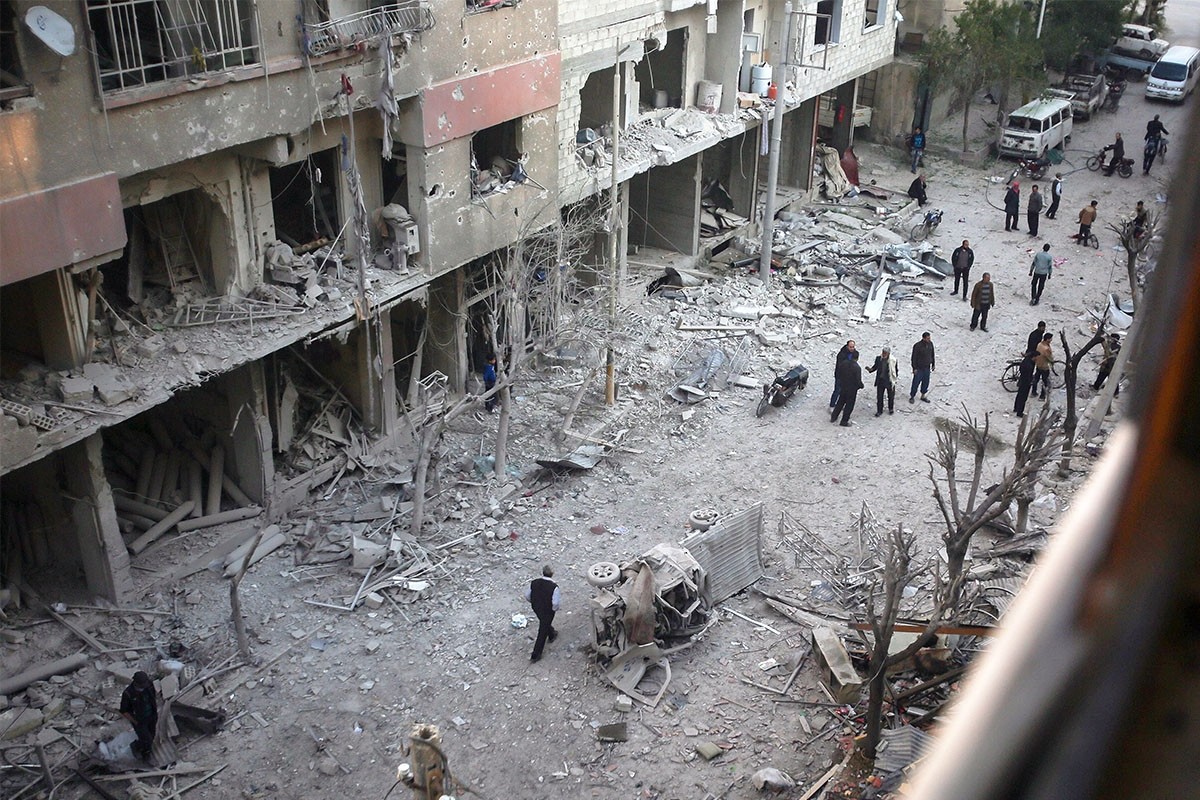 People inspecting damaged buildings after an airstrike by the Assad regime in opposition-held Douma, Syria, April 7. (EPA Photo)
by Yahya Bostan Apr 10, 2017 12:00 am

The Idlib attack was considered by the Trump administration to be an opportunity to make U.S. presence felt in Syrian territory, giving the message that it is back in the game again

The status quo in Syria, which emerged out of Russia's military intervention in 2015 and resulted in the fall of Aleppo to regime forces, is undergoing rapid changes. Tens of thousands of civilians were evacuated from eastern Aleppo as a result of Russian and Turkish diplomatic efforts. Ankara and Moscow, furthermore, had launched the Astana process in an attempt to revitalize the Geneva peace talks and rekindle hopes for peace.

In recent months, a series of developments changed the rules of the game in Syria. In November, U.S. President Donald Trump won a surprise victory in the U.S. presidential election. Upon entering the White House, President Trump criticized his predecessor, Barack Obama, for watching the Syrian civil war from the sidelines and pledged to fix Obama's mess by creating safe zones in Syria and increasing Washington's military presence in the region. At the time, he made a commitment to defeat Daesh as opposed to overthrow the Assad regime. In addition to reaching out to world leaders about safe zones, the Trump administration deployed additional troops to Syria.

In response to changes in Washington's Syria policy, Russia and the Assad regime started violating the nationwide cease-fire – which had been guaranteed in Astana. First, Bashar Assad targeted moderate opposition groups in the South and seized control of new territories. Then came the bombardment of Idlib, an opposition stronghold. At the same time, Damascus moved to curb Turkey's influence in northern Syria by striking a deal with the People's Protection Units (YPG), the PKK's Syrian franchise, as the Russians asked the YPG militants to march under the regime's banner. For policymakers in Ankara, it started to look like Moscow and the regime were abusing the cease-fire to win some time. Meanwhile, President Trump's mild statements about Assad were seen as a sign of Washington's willingness to shake hands with Damascus on a federalist solution in Syria.

Needless to say, the Assad regime was encouraged by the world's silence against the atrocities it committed during this period to kill more people. Last week, the regime forces caused an uproar around the world by launching a chemical attack against innocent civilians in Idlib. Eighty-six people, including 27 children, lost their lives in the assault. The United States retaliated by striking the Shayrat airbase with Tomahawk missiles – the first U.S. attack against the regime since 2011. President Trump's words about having changed his mind about Assad, coupled with statements by U.S. officials calling for regime change in Syria, raised expectations around the world.

However, it is important to not jump to the conclusion that nothing will be the same in Syria after the most recent chemical attack. From Washington's perspective, the airstrikes, with some success, served to distract attention from the Trump administration's problems at home. At the same time, the U.S. considered the chemical attack in Idlib an opportunity to ramp up its military presence in Syria and establish that it was back in the game. Of course, the chemical attack also helped the Trump administration to make a stronger case for safe zones.

Let's make one thing clear: The United States does not want to overthrow the Assad regime. Washington's priority is to set up safe zones in the country – a plan that the Russians haven't been willing to support until now. As such, President Trump hardly changed his mind about Syria. If the White House decides to create a safe zone in northern Syria by enlisting the YPG's services, the U.S. could still place Syria's territorial integrity at risk.