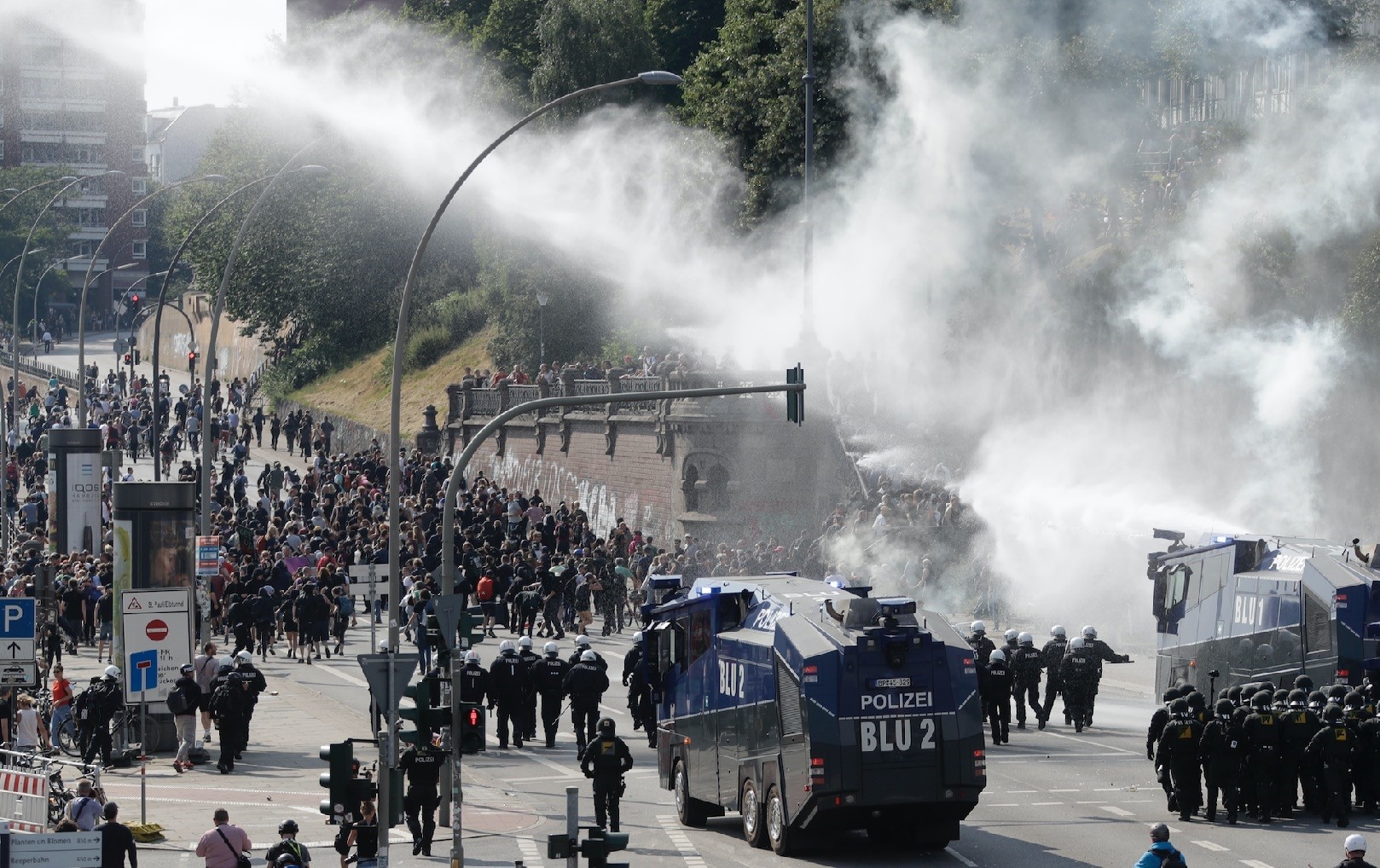 German police use a water cannon to clear a road on the first day of the G20 Summit in Hamburg, July 7, when a group of activists gathered to protest the G20 organization.
by Yahya Bostan Jul 10, 2017 12:00 am

Social injustice fueled by capitalism and the economic decline of Europe are the two important reasons that triggered the protests during the G20 Hamburg Summit. But, Berlin also paid a price for its silence over terrorism

It is not uncommon for G20 summits to attract anti-capitalist activists from all around the world. However, host countries usually take necessary precautions to ensure that protesters do not break the law. Keeping reactionaries under control is a valuable skill for democratic nations. Until now, the 19 members of the organization had been able to ensure the safety of visiting delegations. Unfortunately, the Germans were clearly sleeping at the wheel.

The G20 summit, which took place in Hamburg, triggered unprecedented protests as the German police clashed with protesters on the streets. Quite clearly, the police took strong measures against protesters exercising their democratic rights. Police officers used disproportionate force against activists.

The news stories about the Hamburg summit were accompanied by images of burning vehicles, police officers beating protesters and spraying water on the crowds. The most memorable photograph from last week showed a couple being assaulted with pressurized water as they kissed.

The disproportionate use of force by the German police uncontrollably escalated the situation. At some point, the authorities lost control as protesters started looting stores. In response to widespread violence, heavily armed security officers were deployed to Hamburg and tougher measures were taken against the activists. A protester who directed a laser beam at a police helicopter was charged with attempted murder.

I followed the riots on social media because the German media attempted to impose a blackout on the violent clashes. Die Welt, a major German newspaper, claimed that most protesters weren't even German and described what happened in Hamburg as the left's new fascist violence. Deutsche Welle, in turn, published a story about bike tours in Hamburg instead of covering the protests.

There is a reason why the German media played the three monkeys. The local police requested that the clashes were not broadcast and asked media outlets to not cover steps taken by police officers. Failure to comply resulted in penalties. Bild correspondent Frank Schneider claimed on Twitter that the riot police screamed at journalists as follows: "Piss off or off you go to the hospital. There is no more press freedom from now on." To make matters worse, Germany revoked the accreditation cards of several journalists without an explanation.

To be clear, the security measures couldn't restore order either. Foreign delegations visiting Hamburg found themselves in such difficult situations that the violent riots became a global issue. They shared their experiences on social media and updated their followers about the situation. Upon hearing a Turkish official talk about what happened in Hamburg, I unintentionally remarked that Germany had surrendered to chaos. After all, a diplomatic delegation had been stuck in their hotel. It wasn't just the Turks either. The U.S. delegation, too, ended up being unable to leave.

Clearly, there must be an underlying cause for this kind of senseless violence. Social injustice fueled by capitalism, coupled with the economic decline of Europe, played an important role in the clashes.

But it is necessary to ask whether the German government had no responsibility whatsoever. Needless to say, the authorities were caught off-guard. According to media reports, police officers deployed to Hamburg for the G20 Summit had been heavily drinking at local watering holes. Their lack of professionalism was almost rewarded by German authorities.

At the same time, Germany paid the price for failing to take a stand against terrorism. PKK sympathizers, who have been freely operating in Germany for years, were among the violent protesters in Hamburg. The same goes for Gülenist Terror Group (FETÖ) operatives who participated in last summer's coup attempt in Turkey. In other words, Germany just found out why it is important to pay due attention to the terrorist threat.

Just days before the G20 summit, German reporter Martin Lejeune was assaulted by PKK militants in front of German police officers outside a courthouse. This is the level of confidence that members of a terrorist organization continue to enjoy in Germany today.