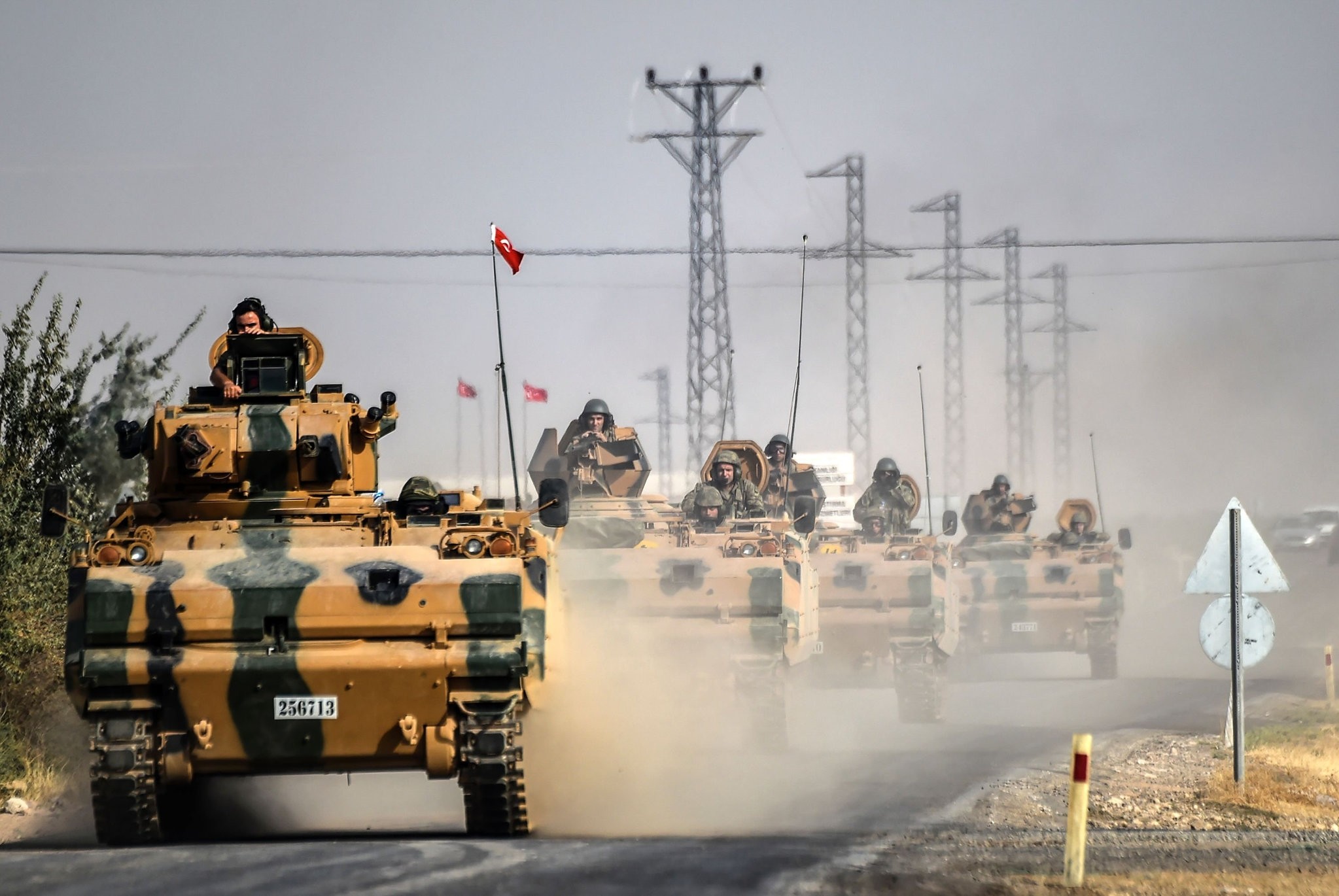 Turkish Army tanks drive to the Syrian Turkish border town of Jarablus as part of counterterror operations against Daesh and PKK-affiliated terrorist groups, Aug. 25, 2016.
by Yahya Bostan Aug 21, 2017 12:00 am

Turkey is committed to stability, de-escalation and confidence building in Idlib, at the same time, it has absolutely no intention of tolerating the presence of terrorist groups there

Statements by Brett McGurk, the U.S. president's special envoy for the Global Coalition to Counter Daesh, regarding the al-Qaida presence in Idlib rung alarm bells in the Turkish capital Ankara. Last week, I had written that the United States could interfere in Idlib under the pretext of fighting terrorism, which Turkish policymakers saw as an effort to dispatch Peoples' Protection Units (YPG) militants to the area.

Shortly after McGurk's controversial statement, strong signals started to emanate from Ankara about a potential military operation against terrorist groups in northern Syria. The first sign came when President Recep Tayyip Erdoğan told the media that, "We are determined to expand [the reach of] the dagger that we stuck in the heart of the terrorist establishment project in Syria by carrying out Operation Euphrates Shield." Over the following days, government officials at various levels issued similar statements, which were followed by Turkish drones flying recon missions over the Democratic Union Party (PYD)-controlled area of Afrin. Some experts saw this development as a low-profile first step taken as part of preparations for a military operation. At the same time, the Turkish military had been shelling terrorist targets near the border in Afrin to lay the groundwork for the imminent operation. (Similar steps had been taken ahead of Operation Euphrates Shield on the Jarablus-Azaz-al-Bab line.)

Meanwhile, the strongest sign of Turkey's next operation was the notable increase in military and diplomatic traffic in the Turkish capital. Last week, Iran's top general, Muhammad Bakiri visited Ankara to meet with his Turkish counterpart Gen. Hulusi Akar to discuss the fight against all terrorist group that place regional security at risk, cooperate more closely on border security and potential steps to promote regional security and stability. In the meeting, the two sides reached an agreement on joint steps against the PKK, including intelligence sharing.

At the same time, Bakiri's visit was important since he became the first Iranian chairman of the joint chiefs to visit Turkey in four decades. It is no secret that Turkey and Iran are opposed to the independence referendum of the Kurdistan Regional Government (KRG). Although Bakiri's statements to the Iranian media stressed the situation in northern Iraq, the top item on the meeting agenda was northern Syria.As a matter of fact, news of the Russian chairman of the joint chiefs planning a visit to Turkey hit the wires as Gen. Bakiri departed Ankara. It is clear that Moscow is far more interested in the situation in northern Syria than Irbil's push for independence. As such, it should be pretty clear that this level of traffic must be related to northern Syria.

Finally, Presidential Spokesman İbrahim Kalın announced that U.S. Defense Secretary James Mattis was going to travel to Ankara later this week, which means that the military leaders of all major players in Syria will have been hosted by the Turks.

The question, of course, is why. If the above-mentioned signs hint at a new Turkish military engagement in northern Syria, the diplomatic traffic would be primarily about sharing information with the visitors about Turkey's plans.

Now there is another important question that needs to be answered. The scope of Turkey's potential (and imminent) operation against the PKK, Daesh or al-Qaida remains unclear. In June, Kalın had noted that Turkey, Russia and Iran had had reached an agreement as part of the Astana process to set up de-escalation zones in Syria. Accordingly, Turkey and Russia were going to assume control of Idlib. Since then, not only have no steps been taken regarding that plan. But armed groups with links to al-Qaida have taken over the area. For some time, many experts believed that the Turkish military was going to interfere in Idlib to promote security and order in the area and engage YPG positions in Afrin to secure the perimeter. In other words, Turkey's priority was Idlib, whereas Afrin merely represented the second stage of the proposed operation.

Could it be possible that Turkey revised its plans when the balance of power in Idlib changed? The answer is no. According to senior Turkish officials, Ankara is committed to stability, de-escalation and confidence building in Idlib. At the same time, my sources note, the Turks have absolutely no intention of tolerating the presence of terrorist groups in Idlib and Afrin.