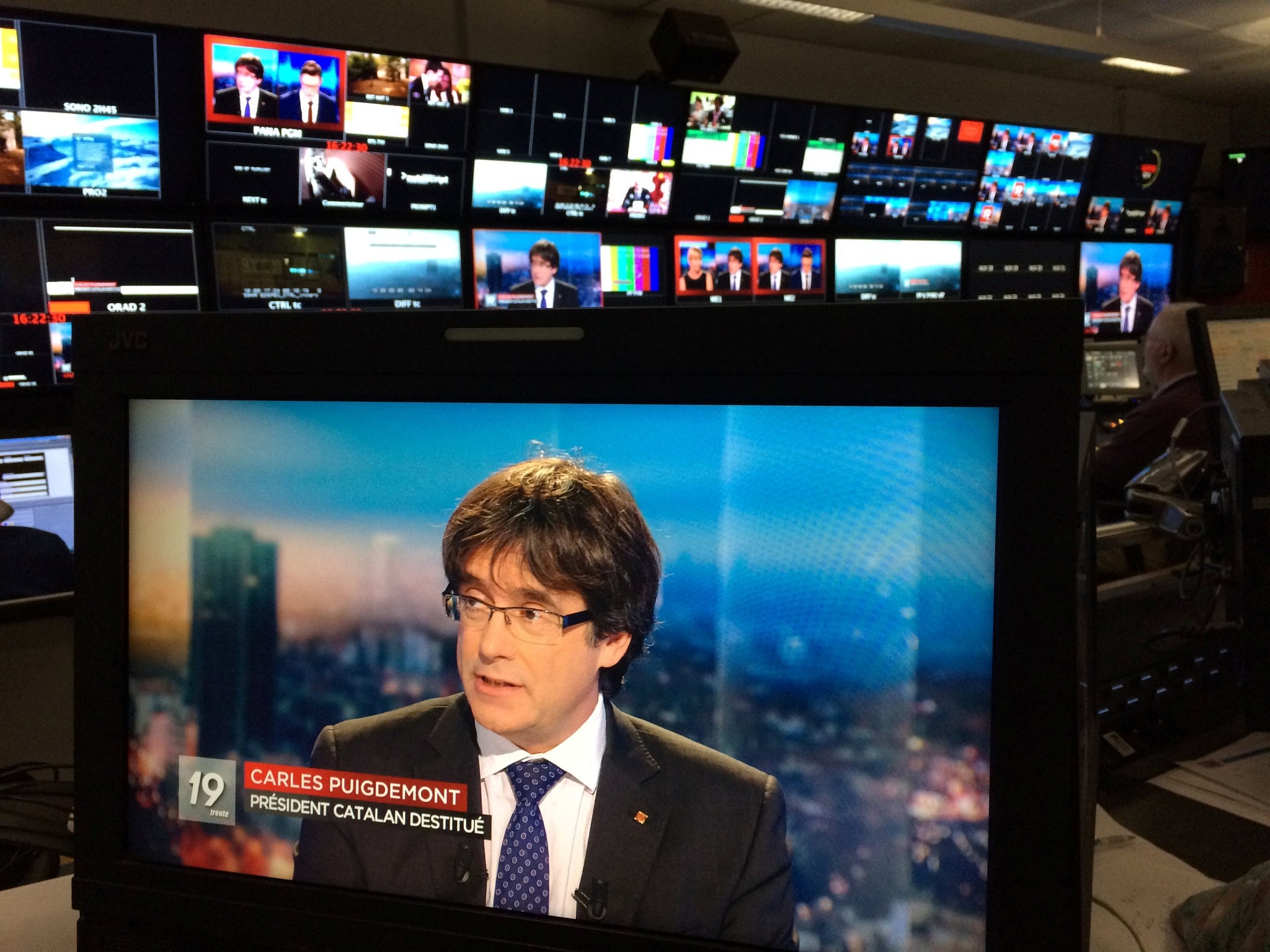 Ousted Catalan President Carles Puigdemont, who fled Belgium following the detention of eight Catalan ministers, appears on a monitor during a live TV interview on a screen in a bar in Brussels, Nov. 3.
by Yahya Bostan
Nov 06, 2017 12:00 am

Daily Sabah's Brussels bureau chief Mehmet Solmaz last week shared an interesting video on social media in which a lawyer representing the eight Catalan ministers, currently under arrest in Spain, alleges that his clients were mistreated in prison: "They were handcuffed from behind. Two ministers were stripped down. They were denied food. [The officers] kept playing the Spanish national anthem."

Unless you've been living under a rock, you'd be familiar with what has been going on in Spain. The whole crisis unfolded in front of our very eyes. The Spanish government harshly responded to an independence referendum held by the Catalan authorities.

The crackdown started during the referendum itself, as Spanish police seized ballot boxes and arrested a number of individuals seeking to participate in the referendum. News agencies carried violent images of a police crackdown against Catalan voters. Seeing that the Catalan authority completed the voting process amid objections, the Spanish government stepped up its efforts by first announcing that it did not recognize the results and declaring the referendum null and void. Soon after, the Catalan government was dissolved and the region's autonomy was suspended. Finally, Spain launched an investigation into a group of individuals responsible for the independence referendum and arrested eight Catalan ministers.

No judicial action has yet been taken against Catalan leader Carles Puidgemont, who escaped to Belgium. However, the Spanish authorities seem unwilling to let the former Catalan president off the hook. A European warrant has been issued for Puidgemont's arrest by Madrid, which will presumably demand his extradition from Brussels. If Belgium refuses to comply with Spain's request, the European Union could find itself faced with a brand new crisis.

Why, you might be asking yourself, was it necessary to go over the situation in Spain? To be clear, there is something really odd about what is happening: A major crisis has been unfolding at the heart of Europe. Yet EU officials, who kept silent regarding much bigger issues in Syria and Iraq and reduced the union's Syria policy to fending off refugees, have again opted to bury their heads in the sand. Obviously, the European Union would issue strongly worded statements about the arrest of cabinet ministers, violent crackdowns by the police and the violent seizure of an autonomous region, if the same things were to happen elsewhere. Ironically, Brussels has been awfully silent and particularly careful not to criticize the Spanish government.

In the past, though, the same EU officials had not refrained from stepping in when similar tensions arose in Turkey. Time and again, they criticized steps taken by Turkish courts and expressed their concerns about the situation in our country. The European Union's double standards have been the subject of a heated debate. Annika Breidthardt, the spokeswoman for the European Commission, recently had to answer some pretty tough questions about Brussels's response to the situation in Spain. She repeatedly pointed out that the Commission fully supported Spain's constitutional order and responded to questions about the warrant for Puidgemont's arrest by saying that Brussels respected the country's independent judiciary. When confronted by a reporter, who pointed out that the Union never missed an opportunity to comment on similar developments in Turkey, about the European Union's suspicious silence, Breidthardt simply said she had nothing to add.

Of course, the situation is perfectly simple. Spain is fighting for survival and responding to the Catalan government, which is trying to divide the country, with the right instruments. EU officials, who know perfectly well that democracy means nothing in the absence of stability and order, are forced to support the Spanish government's actions for the sake of preserving Europe's stability and order. Under the circumstances, it would only make sense for the European Union to provide the same kind of support to Turkey, which has been fighting several terrorist groups including the Gülenist Terror Group (FETÖ) and the PKK. Until now, however, Brussels have failed to express solidarity with the Turkish government in its efforts to stop PKK terrorism. When Peoples' Democratic Party (HDP) Co-Chair Selahattin Demirtaş was arrested last year, the European Union responded with a harsh statement and demanded his immediate release.

Ironically, the steps taken by Turkey were even more legitimate than Spain's actions against Catalan separatists. After all, the situation in Turkey is quite different from what has been happening in Spain. The Catalans merely held a referendum and voted in favor of independence. By contrast, the PKK - to which the HDP was linked - murdered thousands of innocent people in cold blood. In other words, the steps taken by Spain against separatists, who haven't hurt a single Spanish citizen, have been taken in Turkey against a bloody terrorist organization. Without further delay, the European Union must acknowledge that its approach to Turkey's counterterrorism campaign was misguided from the start and turn its back on its hypocritical and incoherent Turkey policy.