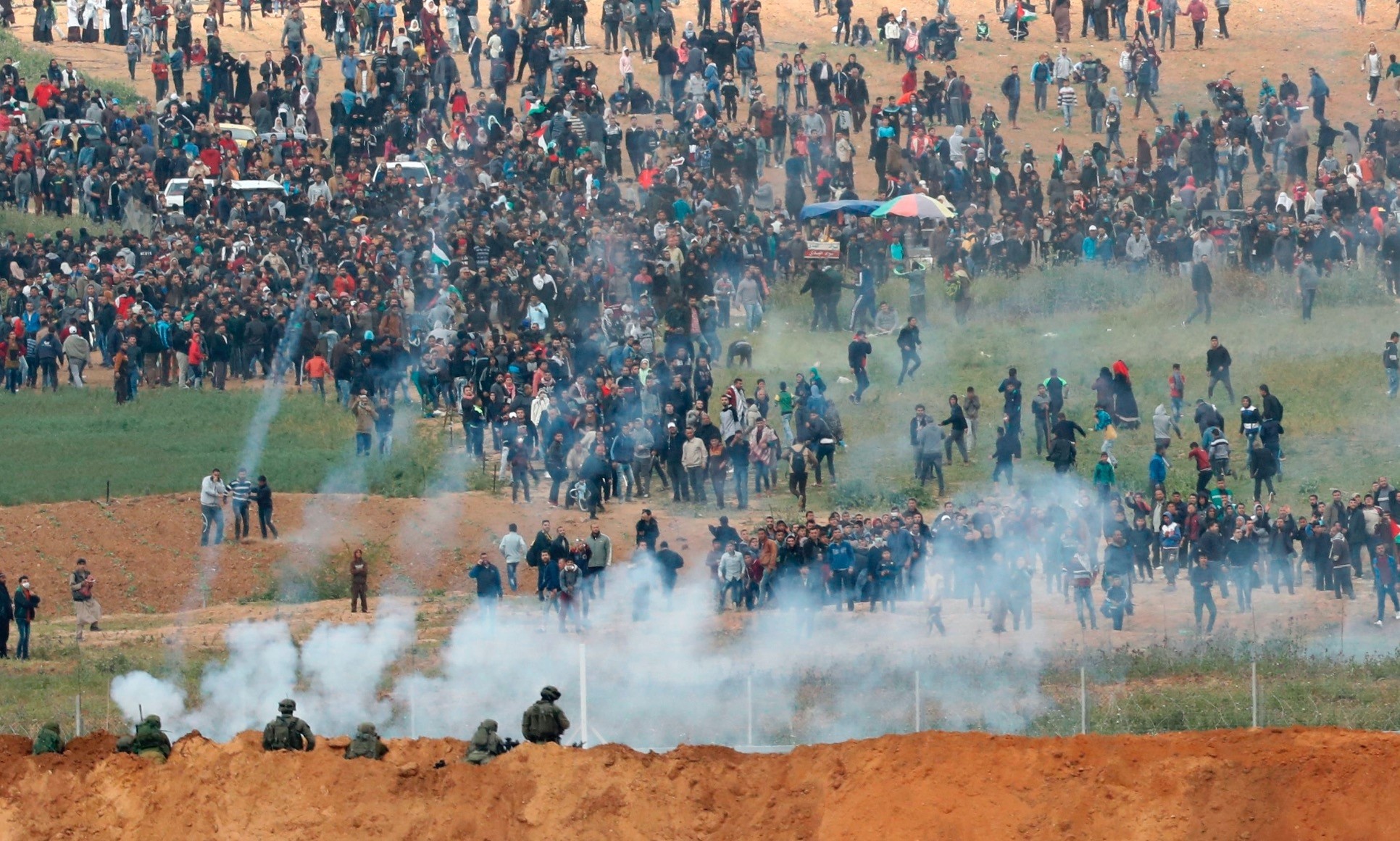 This picture from the southern Israeli kibbutz of Nahal Oz across the border from the Gaza strip shows tear gas grenades being thrown during a Palestinian tent city protest commemorating Land Day, with Israeli soldiers seen below in the foreground.
by Yahya Bostan Apr 02, 2018 12:00 am

There has been a rise in Israel's unadulterated aggression toward civilians; the world should care about these human rights violations

As a journalist, I am no longer surprised to encounter new stories of violence in Palestine as I skim through the feeds of news agencies. It is not uncommon for people in this business to hear about an Israeli settler targeting a Palestinian shepherd's herd with their guard dog, the destruction of Palestinian-owned olive trees or a three-year-old Palestinian child being taken into custody. The most recent example of that senseless violence took place in Gaza on March 30 – the Palestinian Land Day. Shot with live ammunition by Israeli troops, a large number of Palestinian protesters have been killed or injured.

To be clear, the world could not care less about Israel's unadulterated aggression and human rights violations. But the truth does not go away. In recent years, there has been an uptick in Israel's human rights violations due to international developments. Tel Aviv has been filling the power vacuum, which emerged due to the Syrian civil war in particular, at the expense of the Palestinian people. In doing so, it refuses to abide by any universal principles.At the same time, Israel has been encouraged by a number of other factors, most notably the carte blanche handed to them by U.S. President Donald Trump. A recent decision by the United States to relocate its embassy in Israel to Jerusalem was a token of its clear support to Tel Aviv.

Washington's support to Israel, however, isn't limited to relocating the U.S. Embassy. President Trump effectively convinced Saudi Arabia and the United Arab Emirates (UAE) to work with Israel. In the wake of Mohammad bin Salman's appointment as crown prince, Saudi Arabia opened its airspace to Israel as a symbol of its willingness to cooperate.

For Saudi Arabia, the UAE and Egypt, which followed suit, their agreement with Israel serves to contain Iran's influence in the Middle East. For Israel, in turn, it is all about ending the Palestinian Question for once and all. In this regard, all four countries want the PKK's Syrian branch, The Democratic Union Party (PYD) and its armed People's Protection Units (PYG), to become more active in northern Syria, where they hope to create an anti-Iran buffer zone. It goes without saying that their plan would place at risk Turkey's national security more than Iranian interests. At the same time, the four countries have allegedly agreed to oversee the transfer of power from Palestinian President Mahmoud Abbas to Mohammad Dahlan and the distribution of Palestinian lands between Egypt, Israel and Jordan. To summarize, Israel did not just secure American support but also struck a deal with Saudi Arabia, Egypt and the UAE to strengthen its hand in the Middle East. At the same time, the country was able to form a coalition with the same countries that would reasonably be expected to speak up against Tel Aviv's policy of aggression.

In addition to the instability in Syria and Iraq, Israel was encouraged by Iran's poor reputation in the region. In recent years, Tehran has lost all credibility largely due its support to Bashar Assad, Syria's blood dictator. It is for this reason that Saudi Arabia, the UAE and Egypt didn't have to work very hard to legitimize their anti-Iran policies. Tehran's aggressive expansionism and sectarian policies created room for the three countries to look for new political allies and perhaps even sell their own people on rapprochement with Israel.

Finally, it is important to acknowledge that the gradual weakening of the international order created certain opportunities for Israel. The complicity of certain permanent members of the United Nations Security Council (UNSC) in crimes committed in the Middle East and their willingness to look the other way effectively discredited the international system. The UNSC has been rendered ineffective and failed to respond even to chemical attacks in Syria. This situation ensured that the relations between nations would be governed by no rule – except, perhaps, some kind of mafia code. Like other players, Israel understands that it will face no repercussions for violating the rules. Needless to say, this situation further encourages human rights violations. At this point, Tel Aviv simply seeks to score as many points as possible until the international order is rebuilt. Moving forward, the countries that currently cooperate with Israel will come to terms with the fact that Tel Aviv maximizes its interests at their expense.