The Khashoggi murder and the future of MBS 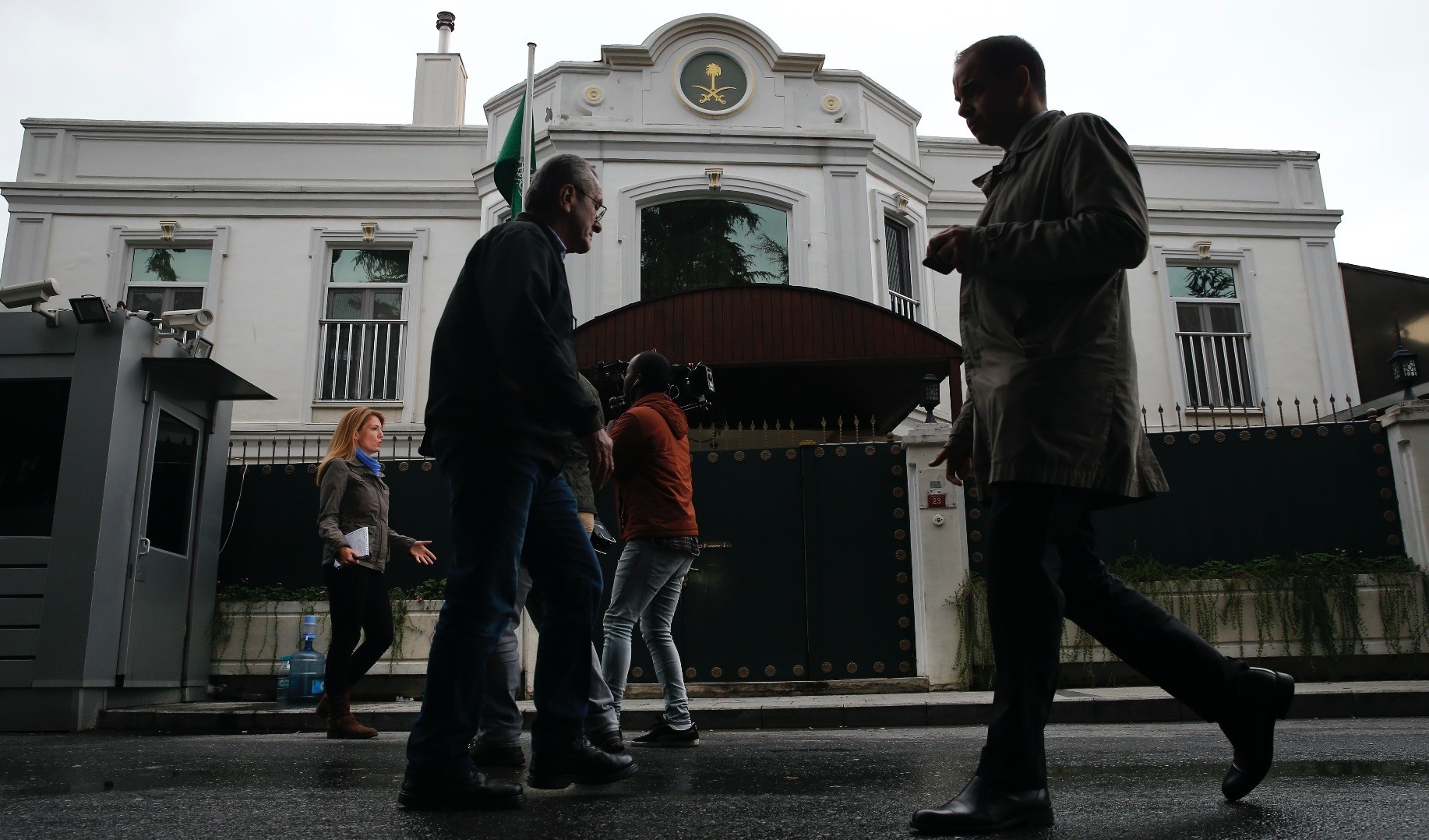 Pedestrians walk by as members of the media report from outside the consul general of Saudi Arabiau2019s residence in Istanbul, Oct. 18.
by Yahya Bostan Oct 22, 2018 12:00 am

With the shocking murder of Jamal Khashoggi, Mohammed bin Salman's image in the international community has been hugely damaged and is unlikely to ever fully recover

The assassination of Jamal Khashoggi, a Saudi journalist and dissident, at the country's consulate in Istanbul was a particularly rare kind of crime. After a long pause, the Saudis admitted that Khashoggi is dead, yet claimed that Crown Prince Mohammad bin Salman (widely known as MBS) had no prior knowledge of the murder. The debate, however, is far from over: Germany and other leading nations have said that Riyadh's explanation was unsatisfactory. Experts stress that a handful of Saudi intelligence operatives could not have gone rogue and killed Khashoggi without orders from the top. In fact, many believe that MBS instructed the Saudi intelligence to murder the Washington Post columnist.

The past couple of weeks went down in history as the single most difficult period in the crown prince's political career. When he imprisoned members of the Saudi royal family, the international community had looked the other way. Nor was it a big problem when he detained Lebanese Prime Minister Saad Hariri in Riyadh and allegedly exercised physical violence on his prisoner. Neither the disastrous war in Yemen nor the Qatar blockade presented a challenge for the Saudi crown prince, who seemed to tighten his grip on power.

MBS's apparent impunity was due to his strong ties to U.S. President Donald Trump and, more indirectly, Israel. If one were to search for a symbol that embodied his rise to power, one needs to look no further than the infamous glowing orb, on which Trump, King Salman and Egyptian President Abdel-Fattah el-Sissi laid their hands in Riyadh. The remaining members of that new alliance were Israeli Prime Minister Benjamin Netanyahu and the President of the United Arab Emirates (UAE). The "orb" alliance sought to contain Iran, address Riyadh's concerns regarding Iranian expansionism and limit Israel's exposure. Although MBS sold his country on Iran's containment, the controversy surrounding Jerusalem weakened his hand at home.

During a recent trip to Mecca for the Islamic pilgrimage, I listened to long speeches about MBS's growing influence yet heard rumors that King Salman and his heir apparent disagreed on Jerusalem, which resulted in the king making some high-level appointments designed to curb the crown prince's power. According to sources, King Salman rejected the so-called "deal of the century," under which Jerusalem would be handed over to Israel.

The Khashoggi murder represented the second major challenge to MBS's power for two reasons: First, it involved an important journalist who was killed at one of Saudi Arabia's diplomatic missions abroad. To be clear, the murder alone was a big deal. Yet the Saudis dug themselves into a hole by rejecting Turkey's allegations in an amateurish, impertinent manner. The international community was offended when the Saudi consul gave the Reuters team in Istanbul a tour of the crime scene, where he showed them empty cupboards. Over the following days, a slow yet steady stream of leaks pushed Riyadh, especially MBS, into a corner. In the end, King Salman had to step in, insulate his heir and reach out to Turkish President Recep Tayyip Erdoğan to pledge his cooperation with the investigation. On Friday, Saudi Arabia officially admitted that Jamal Khashoggi was killed at their consulate in Istanbul.

Those developments will undoubtedly cause a major rupture in MBS's political career. It remains unlikely that King Salman would replace his crown prince, yet MBS's global image has already been severely tarnished. Even if he survives this crisis, he will not be as cocky as in the past. Going forward, the Saudi crown prince will be forced to tread carefully to regain a certain level of legitimacy. After all, the world cannot tolerate another scandal involving MBS, who will be declared persona non grata by the entire world if he makes just one more mistake.

What lies ahead for the "orb" alliance, which hoped to maintain control of the Middle East through Saudi Arabia and the UAE? Disgraced and shaken, MBS will no longer gain international recognition as a credible actor. The question is whether the alliance will continue working with what turned out to be its weakest link.