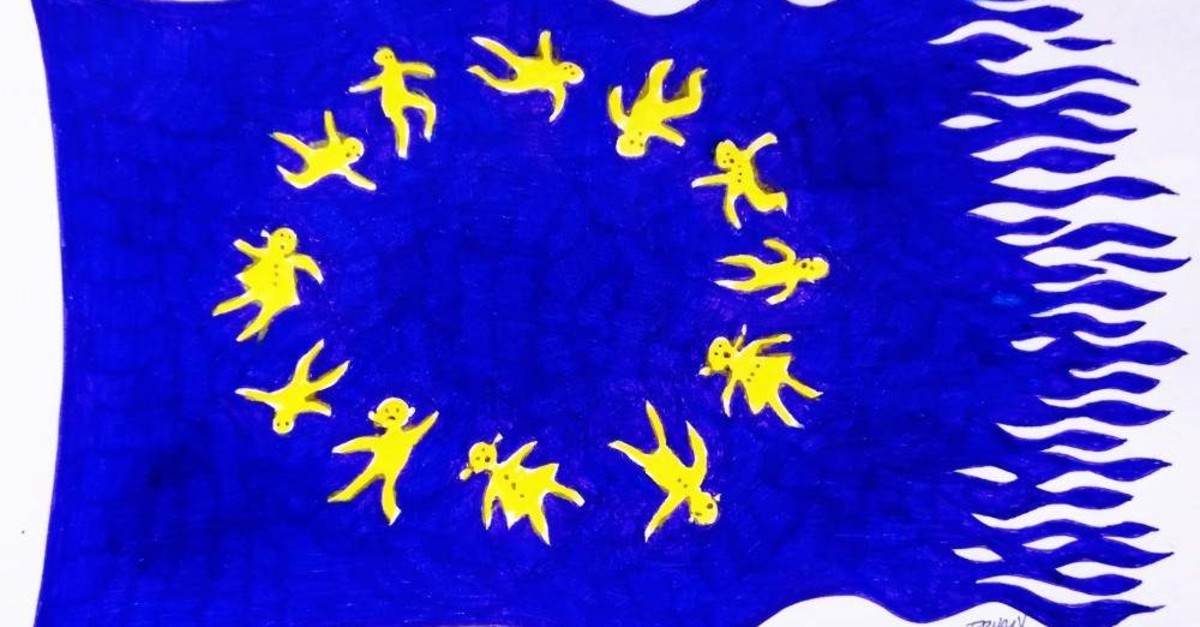 Mu?lteciler c?izimi
by Yahya Bostan Nov 25, 2019 1:26 am
Greek journalist Liana Spyropoulou recently shared two photographs on Twitter. The first image purported to show a group of six child refugees, presumably under the age of 10, sitting at a large desk in a modern classroom. Behind them stood a bookshelf. The classroom walls were properly painted and decorated with trees and flowers. A closer look revealed an air-conditioning unit. In short, the kids, properly fed and clad, were spending time in an educational environment with all the amenities required. Spyropoulou announced that she had taken that picture at a refugee camp in Turkey.
The second image that the Bild correspondent posted, also showed a group of refugee children. They lived in a tent and sat on cardboard boxes. Some of the them did not seem to have shoes. Others were half-naked. This photograph, Spyropoulou stated, was taken in one of Greece’s refugee camps.
Comparing the situation in Turkish and Greek refugee camps, the journalist felt obliged to speak up: “Since the refugee crisis [began] back in 2015, I visited Greece’s camps dozens of times. Two weeks ago, I had the chance to visit the ones in Turkey at the [border] with Syria. I guess I don’t have to explain why I felt ashamed not only as a Greek but also as a European.”
Europe has failed the refugee test. Europeans do not want war victims within their borders and, to discourage refugees, erect invisible walls around the continent. Yet they do not make any effort to end the refugee crisis, either.
Due to their geographical locations, Turkey and Greece experience the negative side effects of Europe’s refugee policy more severely than others. Unofficially, the Turkey is home to over 4 million Syrians. Despite facing various challenges, Turkey’s economy and social fabric has proven rather resilient and this has enabled the Turks to shoulder the burden of the Syrian refugee crisis for many years. At some point, however, Turkey found itself overstretched due to a lack of international support. Hence Ankara’s vocal criticism of Europe’s refugee policies.
The Turkish government warns that it lacks the resources to stem the influx of Syrian refugees to Europe unless the European Union takes necessary steps without further delay. If Turkey proves unable to halt irregular migration, millions of refugees from Syria, Iraq, Afghanistan, Pakistan and Iran – not just the refugee community in Turkey— could line up at Greece’s borders. Associating irregular migration with Syrian refugees alone would be a huge mistake. The number of Iranian asylum seekers, whom Turkey’s security forces stop at the Turkey-Iran border, is much higher than the European Union assumes.
Meanwhile, in Greece, the situation is extremely worrying. According to some sources, the Greek government houses up to 20,000 refugees in camps designed to house 2,500. Athens cannot seem to address the most basic needs of these camps’ residents either. Dunja Mijatović, the Council of Europe Commissioner for Human Rights, recently visited some of those camps, warning that they are “on the edge of catastrophe.” This is obviously a very serious matter.
Amid the turmoil, the Greek government made the curious decision, however, in line with a series of new immigration laws, to shut down refugee camps on the islands of Lesbos, Samos and Chios. Athens says it will build new, closed facilities and prevent refugees from leaving those grounds. In other words, Greece is turning the Aegean islands into a concentration camp for refugees. This inhumane measure comes after the Greek parliament’s adoption of new measures.
When it comes to implementing severe measures to discourage irregular migration, Greece is not alone. Other European governments have followed suit, conceding that they cannot deal with the question of refugees. The answer, they say, is a combination of harsh measures and deportation. Those steps, however, fall short of solving the problem itself. No matter what Europeans do to strike fear into the hearts of refugees, migrants do not budge. There is a very simple reason for their commitment: those people flee violence, death and chaos in their native countries. They reason that the Europeans could not treat them as poorly as their own governments. And this is a valid point.
In light of this situation, the European Union must revise its refugee policy and, instead of punishing refugees, move to address the root causes of irregular migration. To accomplish that goal, it might be a good idea to enter into talks with Turkey. Instead of glorifying the terrorist organization PKK, the Europeans could help the Turks set up a safe zone in northern Syria and offer financial assistance to Syrian refugees in Turkey.
Last Update: Dec 20, 2019 1:54 am
RELATED TOPICS