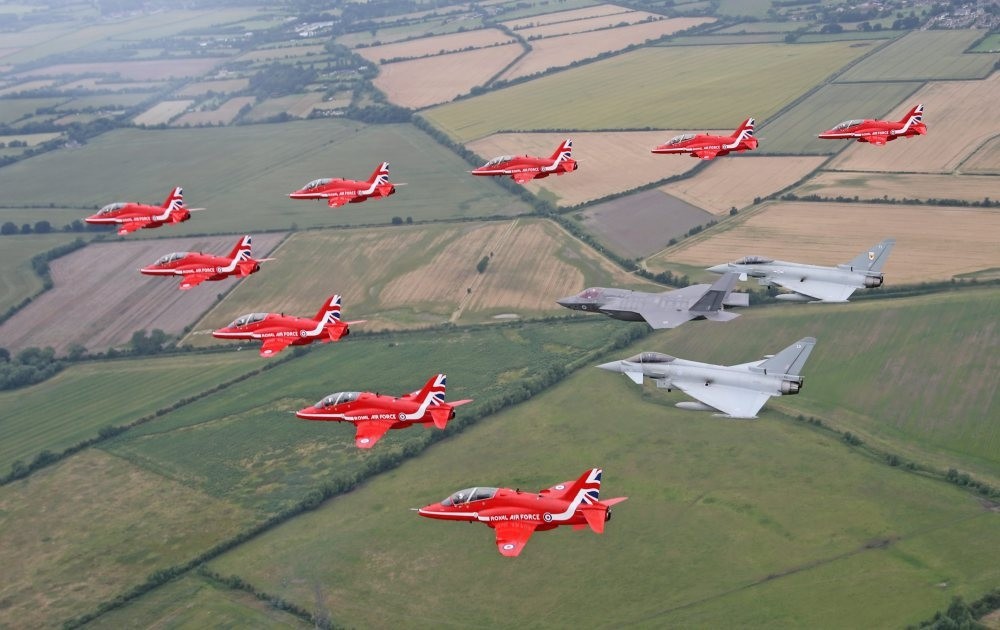 Jet aircraft from the British Royal Air Force Aerobatic Team, the Red Arrows, in formation with two Typhoons and the F-35B Lightning II over Gloucestershire.
by reuters Jul 12, 2016 12:00 am

The U.S. Defense Department extended by two years a project that has cut the cost of Lockheed Martin Corp's F-35 fighter plane by more than $1 million per jet, and kicked off a similar project to cut costs

The Pentagon's F-35 program office is working closely with industry to drive down the cost of the jets - now running just over $100 million per jet - to around $85 million by 2019. The F-35 program is the Pentagon's costliest arms program. The U.S. military plans to spend $379 billion to buy a total of 2,457 F-35 warplanes over the next decades. Under the Blueprint for Affordability cost-cutting program first announced two years ago, Lockheed and its key suppliers, Northrop Grumman Corp and Britain's BAE Systems Plc were due to invest $170 million in new technologies, materials and processes to lower production costs. They are due to recoup their initial outlays from the government once the accrued savings are verified. Specific programs included boosting efficiency through improved tooling, automating production by introducing robotics, and even modifying assembly instructions.

The project funded 193 separate initiatives, of which 75 were still in process. The investments are expected to save $1.15 million per aircraft in the ninth production lot, and $1.7 million in the 10th. Over the life of the program, the changes will save around $4 billion, according to the F-35 program. Over the next two years, the companies have agreed to invest $24 million left over from the original program, and up to $170 million more on continued work to lower the cost of the jets, the program office said.

In addition, the three companies agreed to invest up to $250 million in projects aimed at cutting the cost of operating and maintaining the jets, with a goal of saving $1 billion over a five-year period, the F-35 program office said. Pentagon acquisition chief Frank Kendall said the extra investment by industry would help the military bridge to an F-35 block purchase planned in coming years for international customers that could cut the cost of building the jets by over $2 billion.
RELATED TOPICS