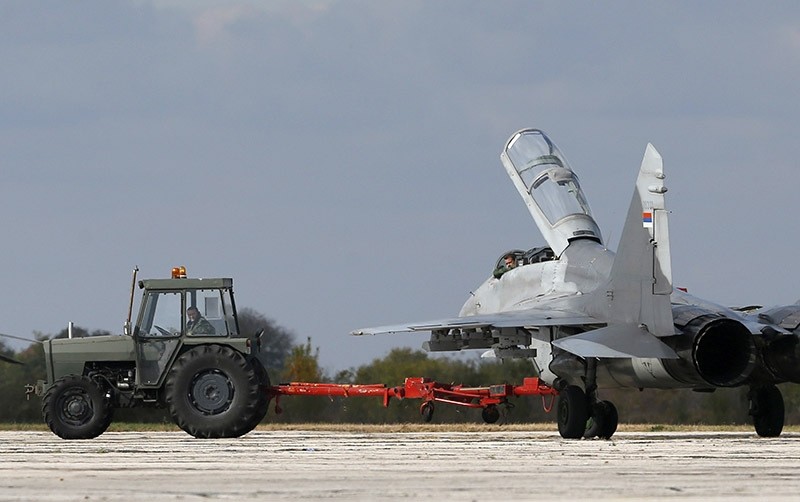 Ground crew prepares a MiG 29 fighter jet for flight during the joint Russian-Serbian military exercises BARS (Brotherhood of Aviators of Russia and Serbia) 2016, at the military airport Batajnica, near Belgrade, Serbia on Oct. 13, 2016. (AP Photo)
by Associated Press Dec 20, 2016 12:00 am

Serbia said Monday that it will purchase Russian combat jets in a move likely to add to tensions in the Balkans amid Moscow's apparent efforts to prevent the volatile European region from joining Western institutions.

Serbian Prime Minister Aleksandar Vucic said he will travel to Moscow later this week to sign a deal that will include six MiG-29 fighters, which he says are needed "to protect our freedom and sovereignty."

Although formally seeking European Union membership, Serbia has been sliding toward its traditional Slavic ally Russia. Moscow has launched a major propaganda effort to keep it away from the West.

Regional tensions have risen in the wake of an alleged election-day coup attempt in October by Serbian and Russian nationalists against Montenegro's pro-Western government for its efforts to join NATO.

Serbian officials have said they need to boost the military to protect the country from an alleged threat from NATO-member Croatia, Serbia's traditional foe that has split from the Serb-led Yugoslavia in the 1990s.

Initially, Vucic said Russia will hand over the aging warplanes — decommissioned by the Russian air force — for free and that they would be delivered to Serbia by next March before undergoing major repairs to extend their service lives. Now he said Serbia will pay for them.

"If we want to save our Serbia, we have to be strong ... and pay whatever we have to," Vucic said.

He also said that he will additionally negotiate the purchase of Russian air defense rocket systems.

While in Belgrade last week, Russian Foreign Minister Sergey Lavrov said Moscow was keen to help Serbia boost its defense and discuss a free trade deal with the Eurasian Union, a Russian-led bloc of ex-Soviet states.

Any inclusion of Serbia into a pro-Russian fold would seriously jeopardize the integrity of southeast Europe after the bloody wars in the Balkans in the 1990s.