Otokar to sell armored vehicles worth $661M to UAE 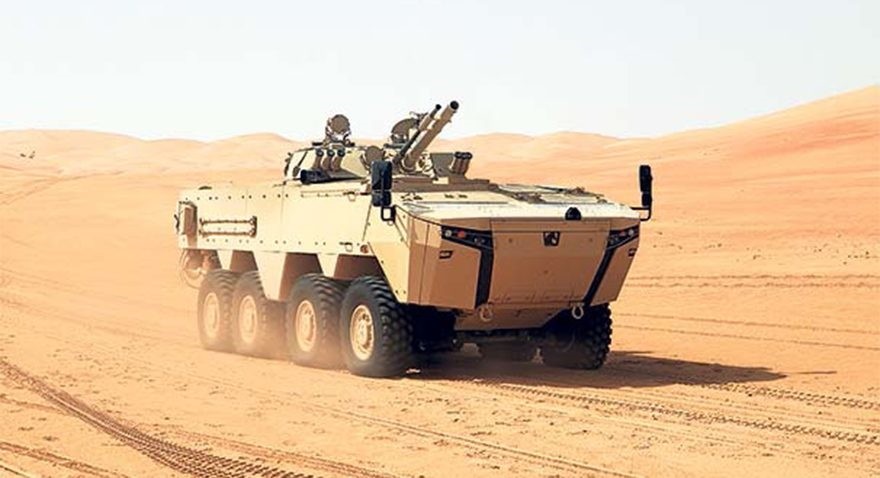 by Daily Sabah with Wires Feb 21, 2017 12:00 am
A subsidiary of Koç Holding, Otokar Otomotiv ve Savunma Sanayi A.Ş., known simply as Otokar, signed the biggest foreign partnership deal of its kind Sunday with the United Arab Emirates (UAE) at the International Defense Exhibition and Conference (IDEX 2017) in Abu Dhabi, establishing a joint company with the country to produce and sell 700 armored vehicles worth $661 million.

The fair was attended by 12 Turkish companies and the deal is one of the biggest of its kind in Turkish history, signed at one of the world's largest and most strategically important defense and security exhibitions in the world.

The said fair was attended by 235 companies from 57 countries. Otokar, which is a Turkish manufacturing company primarily producing buses and military vehicles, and the Tawazun Operations Company, a leading investment firm in the UAE, have established a joint company called Al Jasoor. Otokar will produce and sell 8x8 tactical wheeled armored vehicles worth $ 661 million to the UAE Armed Forces. According to the company's statement to the Public Disclosure Platform (KAP), Tawazun signed a six-year agreement worth $661 million with the UAE Armed Forces to supply armored vehicles. The contract will be overtaken by the Al Jasoor Heavy Vehicles Industries, a joint company established by Otokar and Tawazun. Otokar will have an indirect share of 49 percent in Al Jasoor.

The agreement, which was signed at the IDEX 2017 in Abu Dhabi, was announced by Koç Holding Vice Chairman and Otokar Chairman Ali Koç. Stating that they were exporting to 30 countries, Koç said: "We will not export only to Gulf countries. We will also start production abroad with the company that we will establish with our local partner. I find this development to be very strategic and important in terms of the capabilities of our country's defense industry." Otokar will have a 49 percent share in the company, while the UAE will have a 51 percent share. "Al Jasoor has signed one of the biggest 8x8 armored vehicle purchases in the world, which is estimated to affect 700 vehicles in accordance with the requirements of the UAE's Armed Forces," according to Serdar Görgüç, Otokar's general manager.

The name is believed to have originated from Prophet Muhammad's horse

The name of the 8x8 tactical wheeled armored vehicle, "Rabdan," which will serve within the UAE Armed Forces, is believed to have originated from Prophet Muhammad's horse, a pure Arabian horse known for its power, speed and race-winning capability. Having a capacity for carrying a total of 11 people including a driver and commander, Rabdan's maximum load weight is 30 tons. Abu Dhabi Emirate's Principal Crown Prince and Deputy Commander in Charge of the UAE Armed Forces Sheikh Mohammed bin Zayed El Nahyan's opening ceremony of the first prototype of the 8x8 vehicle named "Rabdan" was attended by Defense Industry Undersecretary İsmail Demir, Abu Dhabi Ambassador Can Dizdar, Koç Holding Vice Chairman Ali Koç, Koç Holding CEO Levent Çakıroğlu, Otokar General Manager Serdar Görgüç and Tawazun CEO H.E. Saif Mohammed Al Hajeri. Ali Koç, regarding the serial production process of the national main battle tank Altay, said: "Altay, designed and developed by main contractor Otokar, has undergone challenging tests for two years and aims to complete the acceptance tests by the end of February. We are ready to be assigned for mass production. If the button were to be pressed today, in the best-case scenario, mass production would be complete by the end of 2018." Koç Holding CEO Çakıroğlu, who remarked that Otokar has strengthened its position in the worldwide defense industry sector, said, "I believe that the contract made with the UAE will accelerate the development of our country's defense industry."
RELATED TOPICS