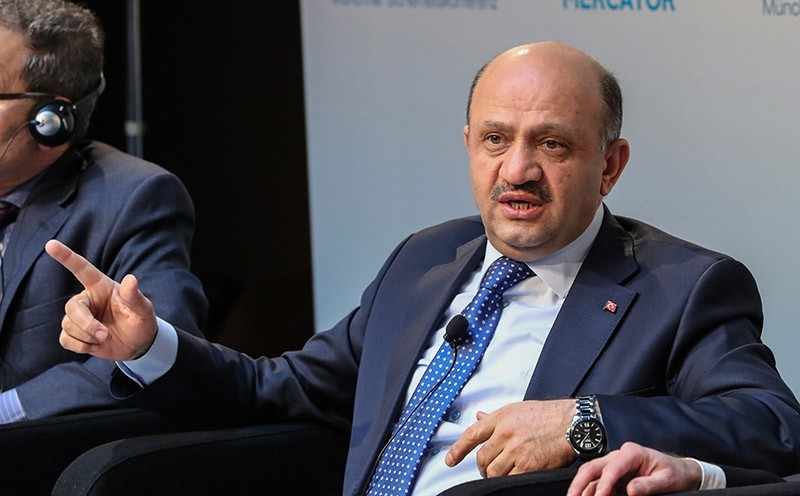 Turkey is likely to reach a final agreement with Russia to purchase S-400 long-range air missile defense systems, according to Turkish Defense Minister Fikri Işık. ''Turkey certainly needs a missile defense system and started a program with the aim of developing our domestically produced system. This program takes time, thus we have held negotiations with different countries to fulfill Turkey's urgent requirement and it seems as though Russia is the most suitable candidate for fulfilling the country's need at the moment,'' Minister Işık said in a televised interview on Wednesday, stressing that Turkey is not in a position to sign the sales contract tomorrow while underlining that there is a significant process currently being discussed.

Turkey and Russia have engaged in ongoing talks regarding Turkey's cooperation with Russia in the defense sector - specifically the d S-400 missile system - since the Russian-Turkish rapprochement in August 2016. However, discussions have gained a new dimension with recent statements from both the Russian and Turkish side as the Tass news agency reported on Feb. 20 that the CEO of Russian state corporation Rostec Sergei Chemezov says talks are underway for Turkey to purchase Russian S-400 missile systems.

"Turkey is interested in S-400 systems. Talks are underway and the key issue is financing," Chemezov told journalists on the sidelines of the International Defense exhibition (IDEX 2017). Turkish Foreign Minister Mevlüt Çavuşoğlu said on Feb. 21 that negotiations for the S-400 air defense missile system with Russia are "continuing positively."

Turkey's long desire to purchase a long-range air missile defense system has been on the international agenda since 2013, when Turkey's Military Procurement Agency, the undersecretariat for the Defense Industry (SSM), chose the China Precision Machinery Import-Export Corporation (CPMIEC) FD-2000 (HQ-9) long-range missile defense system in September 2013. Even though the Chinese company's offer was the best deal among other competitors in terms of price and technology transfer, Turkey had to cancel this tender due to heavy pressure from NATO in November 2015. However, this time Turkey is likely to stand firm against NATO pressure. Responding to the question about NATO's reaction if Turkey decides to buy Russian S-400s, Defense Minister Işık said that Turkey expects NATO to show due understanding toward this decision, noting: ''I believe that they [NATO] will understand Turkey's decision [to purchase S-400s] and will empathize,'' Minister Işık said. ''Even some [other] NATO members have been using systems purchased from countries outside of NATO," he added.

Presidential spokesman İbrahim Kalın echoed the same views. Speaking to members of the press on Feb.22, Kalın said that he does not expect Turkey's decision to buy Russian systems to cause controversy in the NATO, noting: ''In this field we have three criterion which are price, technology transfer and time of delivery. As a sovereign state, we can cooperate with any country that fulfills these requirements,'' Kalın said, ''There are several NATO countries that already use non-NATO systems. So we don't expect any controversy to erupt within NATO.''

In fact, the compatibility and integration of non-NATO systems into the NATO infrastructure is a matter of growing interest, though it seems neither NATO nor Russia wants to integrate the defense system into NATO's infrastructure due to concerns about infiltration of technology. In this case, Turkey may decide to use Russian missiles without integrating them into NATO systems, as Greece did for its Russian S-300 missile system located on the Aegean island of Crete. In addition, Minister Işık indicated that Turkey may use these non-NATO systems without integration. ''When you integrate these [S-400] systems into NATO, you may have a chance to use them with the wide NATO infrastructure, but it's also possible to use them without integration,'' Işık said.

The S-400 missiles are the new generation of the Russian missile system and so far Russia has only sold the system to China and India. Last year, both China and India signed an inter-governmental agreement for the procurement of four regiments of Russian-made S-400's and delivery of the new air defense systems is expected to begin in 2020. Turkey will be the first NATO member country to purchase the system, if the country reaches an agreement for their procurement.