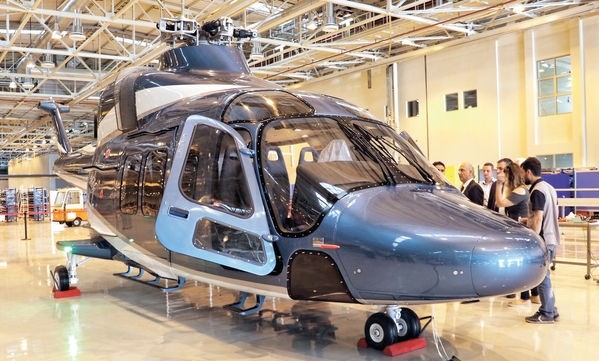 The 13th International Defense Industry Fair will open its doors tomorrow in Istanbul. The fair, where defense industry giants will exhibit their latest products, will be attended by many international defense industry companies and high-ranking delegations from around 50 countries

The world's leading defense companies will present their latest technology in Istanbul at the 13th International Defense Industry Fair (IDEF) from May 9-12. IDEF has been held every two years since 1993 in Turkey with the attendance of both governmental and business sector representatives from around the world. Hosted by the Defense Ministry, the four-day event will be held under the auspices of the presidency of the Republic of Turkey under the management and responsibility of the Turkish Armed Forces Foundation. During the high technology defense industry fair, nearly 800 companies from more than 50 countries will present the latest vehicles, equipment and systems used in the defense, security, maritime, aviation and space industries.

Additionally, the fair, which will be held on an area of 5,000 square meters, will host 493 high-level foreign delegates, including ministers, deputy ministers, chiefs of general staff, army commanders and defense procurement officials from 76 countries and international institutions.

Over 2,000 pre-arranged meetings and a series of agreements are expected to be made at IDEF 2017.

Turkey's first "home-grown" helicopter, the T-625, designed and produced by Turkish Aerospace Industries, Inc. (TUSAŞ), will be revealed to the public at the fair.

Major Turkish weapons manufacturer and defense contracting company ROKETSAN's domestic KAAN missile and weapon system, from the company which pioneered Turkey's national missile and rocket programs, will be displayed for the first time.

ASELSAN will display 317 products and systems at IDEF 2017, marking the largest showcase in the history of the fair.

Turkish automotive giant BMC will showcase its newest armored vehicle, and a total of five of its vehicles will be shown at the fair.

Two of BMC's latest armored vehicles, Vuran and Amazon, have nearly completed their testing phases and mass production will begin in the second half of the year, according to the company's managers. Vuran and Amazon are smaller, more compact versions of the BMC's armored vehicle Kirpi (Hedgehog), and while the Kirpi is capable of carrying 12 people, Vuran and Amazon can carry nine and seven people, respectively. Besides Vuran and Amazon, another version of Kirpi, designed as a military ambulance for the Tunisian army, will also be displayed at the fair. BMC is also planning to launch a new vehicle specifically produced for the Qatari army.

Turkey's Nurol Defense Industries is set to launch their latest armored vehicles, state-of-the-art ballistic protective systems and original capability acquisition targets for the Turkish Aviation Industry at the fair. Nurol will launch Ejder Yalçın, a unique Armored Personnel Carrier (APC) and 4x4 Armored Combat Vehicle. Another vehicle to be displayed at its stand is the Ilgaz II APC, which can be modified according to its users' needs. Furthermore, the Ejder Kunter, which will be put on display for the first time, is a newly developed personnel transport vehicle designed for application with the high-performance Ejder TOMA vehicles used by security forces.