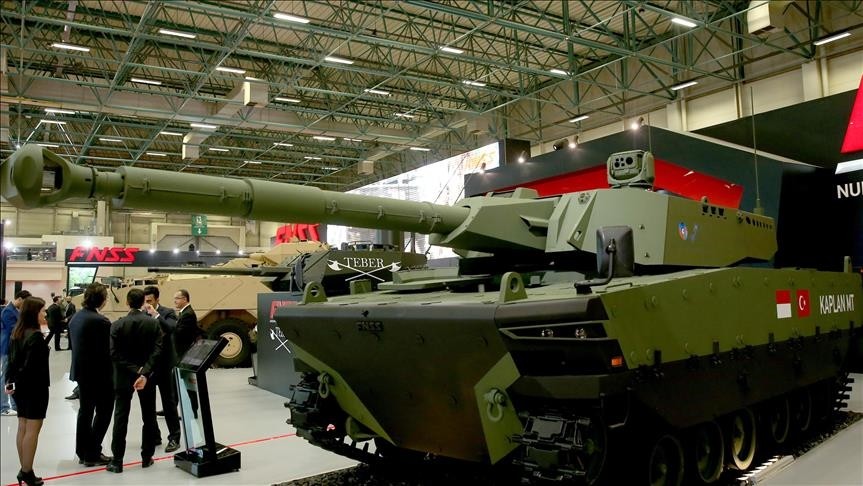 KAPLAN MT Modern Medium Weight Tank developed by FNSS and Indonesian company PT Pindad is showcased during the 13th International Defense Industry Fair (IDEF'17) in Istanbul, Turkey on May 09, 2017. (AA Photo)
by Anadolu Agency May 10, 2017 12:00 am

FNSS CEO Nail Kurt said at a news conference the KAPLAN MT program represents not only a new product but also the implementation of a new approach for cooperation in the multinational defense industry.

Kurt said that in line with FNSS' new vision of being the globe's trusted and respected defense partner, the tank program was launched three years ago with PT Pindad, accompanied by the two countries' defense ministries.

"This medium weight tank is a very effective solution to today's asymmetric warfare conditions exposed which many armies are exposed to," he said, adding that the "conditions require easy and fast deployment, high mobility, low visibility, high firepower, and yet low cost".

Highlighting the company's previous successes in foreign countries, Kurt said, such as in the UAE, Malaysia and Saudi Arabia, the rest of the industry will also follow FNSS in Indonesia and it will support a boost in trade relations between the two friendly countries.

Armoured vehicles manufacturer FNSS is a joint venture in which Turkish Nurol Holding and British BAE Systems have 51 and 49 percent shareholding, respectively.

The KAPLAN MT tank is set to make a powerful contribution thanks to its fire capacity and large ammunition options as well as its superior ability to move.

Diesel-engine powered, the tank has a full automatic transmission and is able to carry three crew members -- a driver, shooter and commander.

"FNSS from Turkey and PT Pindad from Indonesia were assigned to execute the program which started with our signatures during the previous IDEF in 2015," Demir said.

He pointed out that the prototype would be running during the Army Day military parade in Indonesia on Oct. 5.

"After the Indonesia army qualifies the vehicle, it will be ready for serial production. This prototype will serve the needs of Indonesian Army and Turkish Army as well," he said.

Stressing the export opportunities, Demir noted there would be great potential for sale to other countries.

"I congratulate both companies in this program and would like to emphasize that we are ready for support serial production of this program with maximizing cooperation between countries," he added.

Dr. Sutrimo Sumarlan, Director General of Defence Potential for Indonesia, said that the three-year tank project was not only a success for Turkish and Indian companies but also for both friendly countries.

"Indonesia and Turkey believe that this medium weight tank would not be produced just for both countries. We can sell it to other countries, especially those from the Middle East and Central Asia," he added.