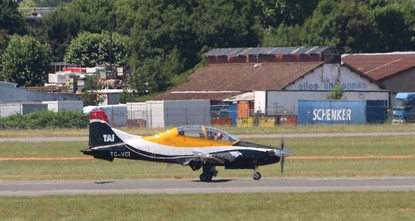 The Hürkuş training aircraft, which was designed by the Turkish Aerospace Industry (TAI) made its debut at Paris Air Show.

Test Pilot Murat Keleş flew Hürkuş for six minutes to demonstrate the plane's performance to participants of the world's largest aviation fair. TAI General Manager Temel Kotil wished the pilot a good flight before takeoff during his address to attendants of the demonstration.

"Our aircraft is safe. It is EASA-European certified. This is a training aircraft, but we also make an armed model. Mass production will begin at the end of the year. We will provide the Air Forces with a training model and the Army with an armed model," Kotil said.

Kotil explained that the per capita national income would increase with the export of aviation products and that the debut of Hürkuş was a step toward this endeavor.