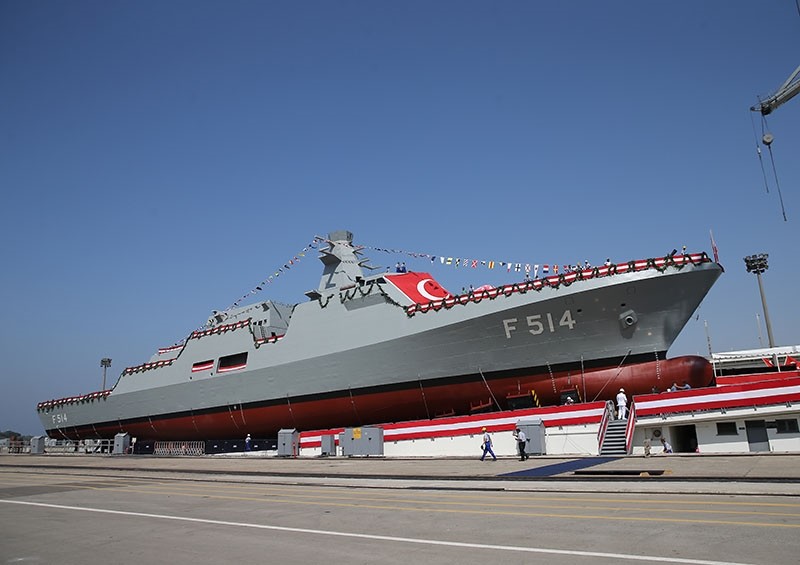 The launching ceremony of the fourth domestically produced warship, the TCG Kınalıada corvette, and the construction ceremony of the Istanbul Frigate took place Monday with the participation of President Recep Tayyip Erdoğan in Istanbul Navy Shipyard Command in Tuzla district. During his speech, President Erdoğan emphasized Turkey's goal of self-sufficiency in defense and stressed the importance of defense projects.

"Whatever the reason, it is absolutely out of question for us to tolerate the attitudes towards preventing Turkey's breakthroughs in the defense industry. Those who adopt such an attitude will be facing us personally," President Erdoğan said.

Erdoğan added that TCG Heybeliada, the first national war corvette built through the MİLGEM (National Ship) Project, has been in service for six years, while the second corvette, TCG Büyükada, has been successfully executing its duties for four years.

Moreover, President Erdoğan stressed the important contributions of the vessels to the operational capability of the navy, revealing how accurate the project is.

Recalling that the equipment and testing activities of TCG Burgazada, which was launched in June last year, were ongoing, Erdoğan said TCG Burgazada, which will enter service next year, will be followed by TCG Kınalıada in 2020, adding that with the launching of these vessels, Turkey's sea power will further increase. Underlining that it is necessary to evaluate the benefits of living in a century when information spreads quickly and access to information gets easier every day, President Erdoğan said all the organizations from government institutions to the private sector, from system suppliers to small and medium-sized enterprises (SMEs) have great responsibilities in this regard. "We know very well that the importance of technological independence is increasing day by day to meet our national defense and security needs and fulfilling our responsibilities in the international community. In the defense industry, we have to go through an upper phase that does not follow but is followed, that does not consume but produces and pioneers the new," Erdoğan said during his speech at the ceremony.

Erdoğan stressed that it is necessary to review the strategy of the projects aimed at supporting the companies operating in the defense industry, adding that a system that will solve bottlenecks, troubles and problems, and will support everyone with an intellectual project in this field, regardless of its size, should be quickly established. "From time to time, I get news of the negativities that break the motivation, resolution and courage of the entrepreneurs that stem from either indifference or taking sides in competitions and it sometimes stinks of bad intentions," Erdoğan continued. "Whatever the reason, it is absolutely out of the question for us to tolerate the attitudes preventing Turkey's breakthroughs in the defense industry. Those who adopt such an attitude will be facing us personally. While working for our country and nationality and also winning for themselves, really competent, productive and sincere entrepreneurs and our companies should know that we are on their side."

Suggesting that possessing a claim means possessing the means as well, Erdoğan noted that Turkey is a country with great claims for itself and for all of its kin, brothers and friends. "We must first raise our defense industry facilities to the highest level in order to realize these claims. While it is important that we reached $5 billion worth in production and $1.6 billion worth in export power in this area last year, it is still far behind our targets," Erdoğan said, stressing that, as a country that aims to remove the external dependency from defense industry completely in 2023, Turkey needs to take the steps faster.

President Erdoğan said the construction of military vessels and submarines is an area in which proud achievements have been reached for the defense industry. Informing that Turkey is currently among the 10 countries that are able to design, build and manage a war vessel nationally, he stated that a domestic contribution rate of over 65 percent was achieved in the completely national MILGEM project.

"The MİLGEM projects, which were initiated during my prime ministry period and are developing rapidly today, will now have the opportunity to take place in even shorter periods of time," Erdoğan said, adding that the construction and installation of the vessels is carried out with the participation of more than 50 local institutions, organizations and companies in this project. "We are also proud that many of the systems and equipment developed by domestic facilities within the scope of the project are being used by our marines," he said, suggesting that MİLGEM, which was carried out under the leadership of the Undersecretariat for Defense Industries, is an exemplary project that has been successfully achieved with cooperation of state institutions, universities, private sector and SMEs.

Erdoğan pointed out that Turkey's problems in its geography shows how accurate the commitment given to the national defense industry is. Indicating that they will continue to increase the number of projects that are critical to the country's security, Erdoğan said there are 14 war-vessel projects being completed in the private sector and military shipyards, as well as 10 more projects to be signed in the coming years. "All these developments are an expression of our commitment to the solutions we have developed in the maritime field against the threats to our country. I hope we will also build an aircraft carrier," he said, adding that another good result of this development is foreign sales. Recalling that, so far, Turkey has exported 165 vessels or boats in various types and sizes to Malaysia, Bahrain, Tanzania, United Arab Emirates (UAE), Qatar, Egypt, Georgia, Pakistan, Turkmenistan, Nigeria, Norway and Romania, Erdoğan said: "This is very important to show Turkey's path. We should aim to move our country to the top spot in the world in the military shipbuilding industry together with all the stakeholders operating in this area by increasing domestic construction and contribution. Even the projects that are the peak of this field, such as the aircraft carrier, are not a faraway dream for us anymore."

Noting that they have now entered a process that will bring out the original products in the military shipbuilding sector by providing a consensus to meet the needs of the defense industry, Erdoğan said they are determined to continue the projects in this area, especially MİLGEM. He also stressed the importance of strengthening the navy with the new projects, adding that TCG Kınalıada Corvette, which was launched six months ahead of schedule, and the Istanbul Frigate, the construction ceremony of which was just held, represent symbols of this determination.

The construction of all four ships of the ongoing Ada class - named after Istanbul's Princes' Islands - were undertaken by the Istanbul Navy Shipyard Command of Turkish Armed Forces.

Two amphibious tank landing ships built by a private shipyard in Tuzla as part of the MİLGEM project, TGC Bayraktar and TCG Sancaktar, also joined to the navy's inventory n 2017.