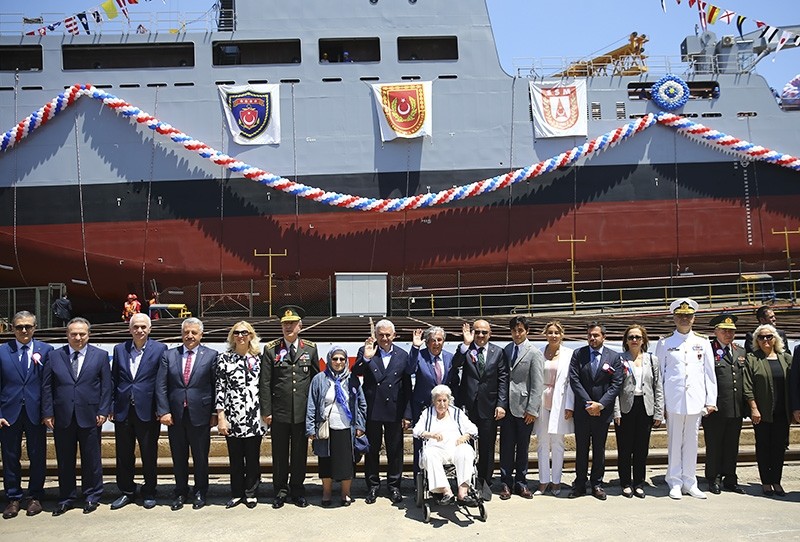 A logistics support ship was launched Saturday as the latest step of domestic projects in recent years to strengthen the ageing inventory of the Turkish Navy.

"We have made great progress in defense industry in the last 15 years. We have increased local contribution from 24 percent to over 60 percent. The target is bigger," Yıldırım stressed.

He said 50 years ago people were discussing if Turkey could build ships or not but today Turkey can build ships of every category, capacity and ability. Yıldırım added that they can even satisfy the needs of other countries.

Yıldırım said that among 30 countries making up 90 percent of world merchant marine fleet, Turkey has risen to 14th place.

He said Turkey has completed 14 military ship projects in the last 15 years and provided more than 30 billion dollars to national defense industry in the same period.

During the ceremony, Defense Minister Fikri Işık said that Turkey aims to increase domestic contribution in defense sector over 80 percent by 2023.

Named Lieutenant Arif Ekmekçi, an elite navy commando personnel who went missing during an naval exercise in 1993, the 106.5-meter-long 16.8-meter wide ship has a capacity of 6,150 tons of fuel. The ship, also featuring a helicopter landing platform, has an average speed of 12 nautical miles per hour (22 kph) and range of 9,500 nautical miles (17,594 kilometers).

Turkey recently launched the fourth vessel of the MİLGEM Project's eight-vessel goal, TCG Kınalıada Corvette, on Monday, which joined TCG Heybeliada, TCG Büyükada and TCG Burgazada delivered to the navy in 2011, 2013 and 2016, respectively.

The construction of all four ships of the ongoing Ada class - named after Istanbul's Princes' Islands - were undertaken by the Istanbul Navy Shipyard Command of Turkish Armed Forces.

The construction of TCG Istanbul Frigate was launched on Monday.

Two amphibious tank landing ships built by a private shipyard in Tuzla as part of the MİLGEM project, TGC Bayraktar and TCG Sancaktar, also joined to the navy's inventory in 2017.