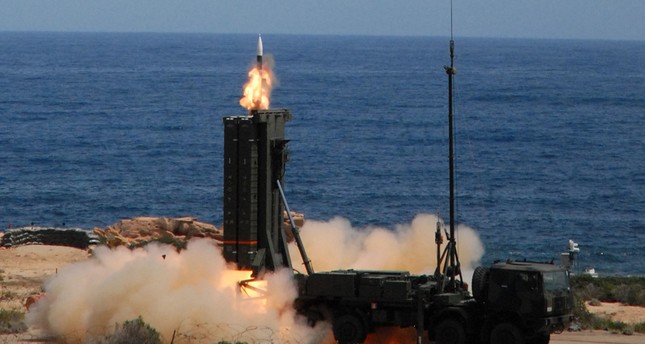 "I am happy to announce that this afternoon Turkey has signed a cooperation agreement with Italian-French consortium Eurosam to produce missile defense systems," the minister said, speaking at a reception for Bastille Day at the French embassy in Ankara.

According to the deal, Turksh companies and Eurosam will work together to produce SAMP/T Aster 30 long-range surface-to-air missile (SAM) systems, which is already in use in several NATO member countries.

The minister described the move as one of the most concrete developments of Turkey's alliance within the defense industry.

On July 4, Işık had announced that Ankara and Moscow agreed on the "technical issues" relating to the purchase of a Russian missile system.

"All technical issues, both by the Russian side and the Turkish side, are over," Isik said in an interview with broadcaster TRT Haber. "Now it is time for the final decision.

"Now, we continue work on the financial aspects. I think we will bring this to a close in the coming days."

Following Isşık's remarks, Russian presidential aide Vladimir Kozhin said last week that Moscow and Ankara had agreed on the delivery of S-400 mobile systems but he added that the Kremlin had not approved a loan for the deal.

He said that Russia saw "no obstacles" to providing missiles to a NATO member.

The S-400 system was introduced in 2007 and can carry three types of missiles capable of destroying ground and air targets, including ballistic and cruise missiles.

It can track and engage up to 300 targets simultaneously and has an altitude ceiling of 27 kilometers (17 miles).

The SAMP/T Aster 30 system uses a network of sophisticated radars and sensors - including 3D phased array radar - enabling it to be highly effective against all types of air threats. The system can intercept missiles with a 600 kilometer range and it can operate in standalone mode or can be integrated in a coordinated network such as NATO missiles defense system.

*Contributed by Ali Ünal from Ankara