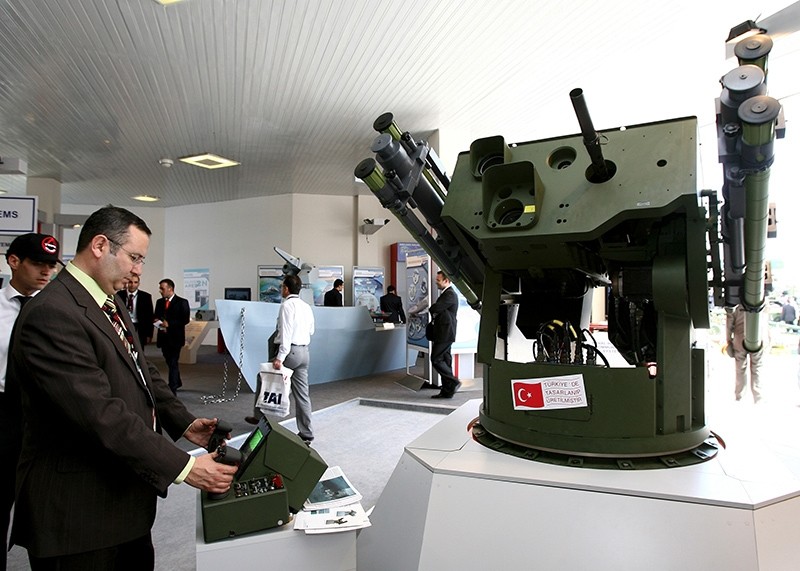 Against the backdrop of increasing political strife between Turkey and Germany, economic relations between the two have managed to remain unscathed by the conflict, according to the latest data on exports, revealing that aviation and defense exports to Germany increased 17 percent in the first eight months of the year

Recently increasing political tension between Turkey and Germany has raised the issue of the effects of strained relations on the defense industry. In a political environment where Turkey's demands are sometimes not met and the need to revisit relevant projects is raised, the fact that Turkish companies are boosting exports to Germany in the defense and aviation industries has gained special attention.

According to data from the Turkish Exporters Assembly (TİM), in the eight-month period from January to August of this year, Turkey's defense and aviation industry delivered a parallel performance to that of last year.

The largest export destination was the U.S. with a total amount of $444 million. Germany came second with $140 million, followed by India with $66 million. Poland, the U.K. and France were other major destinations for exports with $47 million, $34 million and $33 million, respectively.

Taking into consideration the recently increasing political tension and relevant announcements which address bilateral relationships - especially within the defense industry - export performance to Germany in the said period is particularly striking. While the defense and aviation industries exported a total amount of $120 million to Germany in the eight months of 2016, this amount increased by 17 percent during the same period this year.

In the wake of the latest developments, various sources from Germany, which were erratic in replying to Turkey's demands regarding weapons, ammunition and defense articles with an affirmative response, argued that "New defense projects with Turkey will be revisited and suspended and no further arms trade will be allowed."

Difficult period for the sector in Europe

He also defined offset sales as the exports of goods and services to countries which produce these products domestically in return for purchase price during the buying process of a defense system, expressing that Turkey bought defense systems from Germany, making the latter responsible to Turkey for offset sales.

"These sales will be extending by a number of years and it is quite possible that sales in the latest data will be remainder sales and deliveries from previous years. It will be beneficial to look at some other indicators to assess the reflection of tension between the two countries on the cooperative efforts of the defense industry in a healthy way," he said.

These indicators, he elaborated, can be summarized as the number and scope of new sales agreements, a possible rise in the delivery of intermediate and/or finished products in ongoing projects and problems in the sale of infrastructure and production tools for the defense industry.

Pointing out that the defense and aviation industry of Germany and Europe as a whole have been going through a difficult period for a while, Mevlütoğlu said that the unique needs of both countries are not adequate in subsidizing giant industrial infrastructure.

"Another factor in this inadequacy is the limited capacity of defense budgets. Similarly, it is now much more difficult to implement projects for especially small and medium-scaled companies to survive in the civil aviation sector," he noted.

As a result of these developments, European countries are heading for partnership-developing projects in high-cost platforms such as unmanned air vehicles (UAVs) and new generation fighter aircraft to share the cost and also the risks. Therefore, countries like Turkey are seeing great opportunities. Turkish defense and aviation companies have been increasingly participating in international projects in recent years. Also, the country was a very important market for German companies in the aviation and defense industry, until recently.

Similarly, Russia was the most important customer of German defense companies until sanctions following the Ukraine crisis in 2014.

Having lost the Turkish market to other countries in terms of both product sale and large-scale partner development projects, Germany may have great difficulty in making up this loss, Mevlütoğlu speculated.

He also emphasized that Turkey has completed large-scale, challenging defense and aviation projects in a very broad field. Saying that these projects also included subsystem, component and critical technology development projects, Mevlütoğlu indicated that not only major, well-known contracting companies but also many more small and medium-scaled companies must be included.

"Horizontal and vertical expansion typically boosts the potential for cooperation internationally in fields such as technological development and transfer, partner development and common marketing," he said, adding that further motivation is needed to maximize the opportunities for exporting to economically developing nations as well.