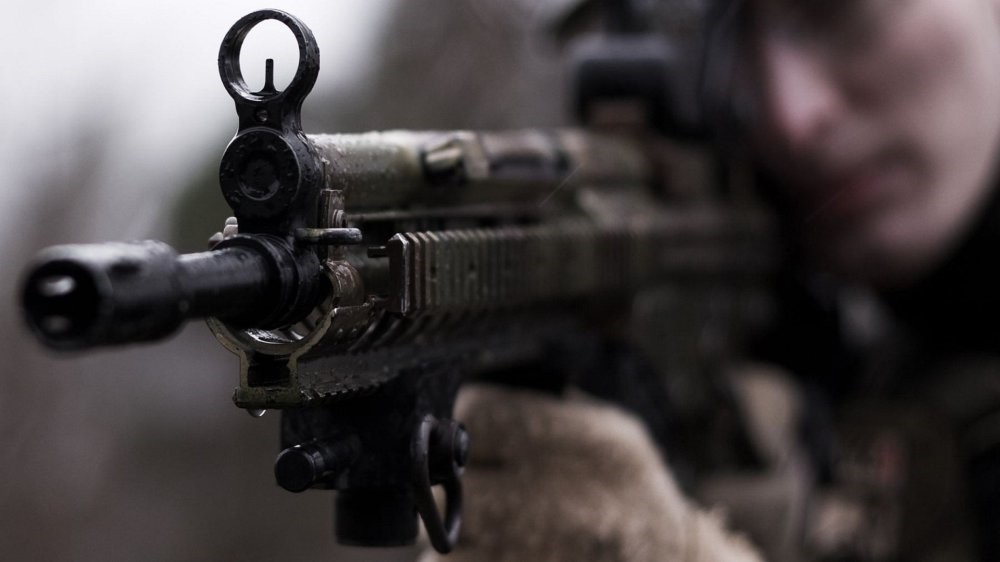 With the production of domestic trifles, the Turkish Armed Forces plans to remove German-manufactured G3 trifles from its inventory.
by Ali Ünal Sep 19, 2017 12:00 am

Germany's aggressive rhetoric on Turkey took on a new dimension last week as officials declared that the country has halted defense exports to NATO-ally Turkey, while experts opine that this maneuver will remain inconclusive for the Turkish defense industry

The rise of anti-Turkey rhetoric in German politics has revved up German politicians prior to the upcoming federal elections on Sept. 24, amid aims to win potential votes. However, the freezing of German arms exports to NATO-ally Turkey sparked a new debate, as the German government uses the suspension of arms exports to Turkey as a new political tool for increasing Berlin's pressure on Ankara, as experts indicate that Germany's decision will have no impact on the Turkish defense industry.

According to data obtained from the Turkish Statistical Institute (TurkStat), Turkey's imports of German firearms and ammunition in 2016 reached around $2.4 million. Data also revealed that the exports of Turkish non-military weapons to Germany, such as rifles, shotguns, carbines and muzzleloaders, increased up to $6 million in 2016. As foreign trade figures indicate that arms trade between the two countries has no significance, Turkey's cooperation between Germany in the defense industry is not limited to export and import figures.

Defense industry researcher Turan Oğuz emphasized that Germany is Turkey's second partner after the U.S in importing critical vessels such as submarines, frigates, assault boats and tanks. "However, we have learned from experience that we cannot trust Germany as it attached restriction on the use of German weapons in southeastern Anatolia in 1992," Oğuz said. "Despite the fact that Germany removed the restriction in 2009, Turkey has reduced its purchases from Germany with this understanding, he added. The defense industry expert also reiterated that due to previous, bitter experiences, there is a motto in the Turkish defense industry that has been used for decades and says, "Do not purchase from Germany if it is not an obligation." This motto is still valid in Turkey, he added.

Despite this motto, the ongoing projects with German arms makers reveals that there is wide-ranged cooperation between the two countries. Turkey and Germany have been working jointly in manufacturing within the Airbus A400M consortium and Thyssenkrupp Marine Systems (TKMS), where Type 214 submarines are manufactured. In addition, the German Rhein Metal Company established a joint venture with the BMC Company which aims to establish joint production of armored vehicles, particularly the Altay tank. However, defense industry expert Oğuz believes that none of these projects will be affected by the possible decision to freeze exports of German arms. "The A400M and submarine projects were launched under strict stipulations. Therefore, these projects will not be affected in the future so as to avoid paying large compensations. Still, Turkish STM and German TSKM gave an offer along with an Indonesian company for the joint production of Type 214 submarines, and those firms are still engaged in cooperation. As for the Rheinmetall Company, there has been no problem so far," he said. "However, we do have alternative suppliers. Turkey ensured its alternatives from the west and east to procure materials for ships, submarines, the Altay tank and Fırtına 2 KMO. In the event that there is a breakdown in relations with Germany, the procurement might slow down for one-to-two years. However, these types of radical changes can be observed in times of war or under the U.N. resolutions. Therefore, I do not think that this issue will affect us," he added.

Hüseyin Kocabıyık, a member of the National Defense Commission of Turkish Parliament, looks at Turkish-German tensions from an entirely different angle. "As a member of the Parliament Defense Commission, I can understand Germany's attitude which is not in line with amicable relations of the NATO alliance. Germany seems bored as an industry and trade state under the wings of the U.S. It seeks interest fields in the Middle East and other regions for itself. At this point, it considers Turkey as a specific hurdle in the Middle East region."

Kocabıyık stated that Turkey has been blocking the interests of Germany due to three reasons, one of which is that Turkey will become an energy hub for Europe with TurkStream and Trans Anatolian Natural Gas Pipeline (TANAP) projects. Another reason is that Istanbul could potentially take Frankfurt's place as a European air hub when the Istanbul Third Airport is finalized. According to Kocabıyık, the final reason is that Turkey opposes Germany's plans to use it as a tool in the Middle East. Kocabıyık considers the underlying reason for Germany's support of terrorist groups like the PKK and its Syrian offshoot the Democratic Union Party (PYD) and FETÖ as aims of weakening Turkey. "This neurotic attitude of Germany will not lead it anywhere. The latest developments show that [Germany] stands alone in Europe in its enmity toward Turkey. I hope German politicians will avoid these mistakes after the elections," he concluded.