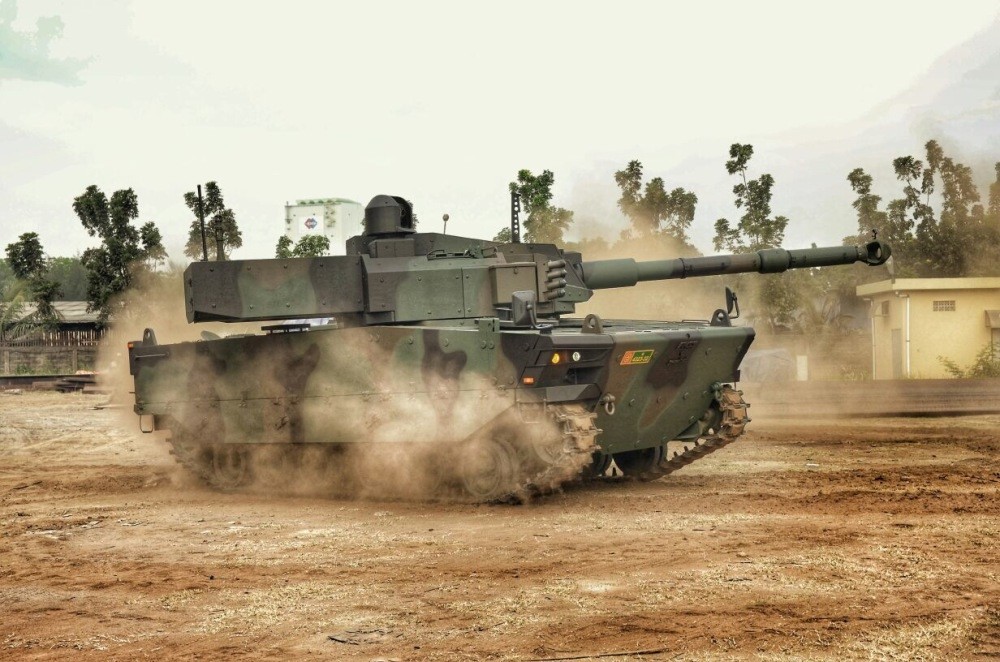 KAPLAN MT of FNSS is the first tank that the Turkish defense industry will export. (AA Photo)
by Daily Sabah with AA Oct 03, 2017 12:00 am

As Turkish defense firms broaden their partnerships and joint projects worldwide, their stakes in the defense export market place them among the top global players, as Ankara-based FNSS is preparing to export its jointly developed tank, KAPLAN MT, to be showcased in Indonesia

The last decade has witnessed a leap in Turkey's domestic defense industry, with more ambitious players arising from the private sector. In addition to catering to the demands of the local industry, major players in the sector are now exporting their products. In one such example, the tank developed by Ankara-based defense industry firm FNSS Savunma Sistemleri A.Ş. and their Indonesian partner is gearing up for export.

The KAPLAN MT Modern Medium Weight Tank, which will be the first vehicle to be exported in the tank class of Turkey's defense industry, will demonstrate its strength in challenging field tests in Indonesia.

The first prototype KAPLAN MT, designed and developed in Turkey by Indonesian PT Pindad with FNSS, one of the leading armored vehicle manufacturers in the defense industry, was exported to Indonesia in September.

Developed by FNSS engineers in partnership with PT Pindad, KAPLAN MT is the first tank-class vehicle in the Turkish defense industry to be exported. Also, KAPLAN MT was developed to meet the Indonesian armed forces' demands for a modern, medium-weight tank.

KAPLAN MT will be presented to the public by the Indonesian Army in an official parade on National Armed Forces Day, Oct. 5, in Cilegon, Indonesia.

KAPLAN MT comes to the fore as a successful joint development project supported by the Turkish and Indonesian defense ministries.

The prototype KAPLAN MT Modern Medium-Weight Tank, which was showcased to visitors at IDEF 2017, brings a breath of fresh air to the battlefield with its accurate, direct firing capabilities, a wide selection of ammunition ranging from close-fire support to anti-tank ammunition, and superior tactical and strategic mobility.

The KAPLAN MT takes its power from a power pack located at the rear of the vehicle, which delivers a power-to-weight ratio of about 20 HP/ton. The engine transfers this power to the driving system, which has a six-wheel, anti-shock suspension system with double-pinned tracks mounted on torsion bars.

Joint Development KAPLAN MT design architecture consist of advanced ballistic and mine protection with a broad range of fire power, ranging from support of infantry to anti-armor.

Firepower is provided by a CMI Cockerill 3105 turret, integrated with a high-pressure 105-millimeter (mm) Cockerill gun and an advanced autoloader. Thanks to this turret, the KAPLAN MT has high firepower despite its relatively low weight.

The vehicle, which has an ultimate mine and ballistic protection for its class, rapidly responds to threats in the field and offers adequate firepower over a short period of time which, in turn, ensures superior survivability and mobility on the battlefield.

Speaking to Anadolu Agency, Nail Kurt, general manager and CEO of FNSS, highlighted the success of the project.

Pointing out that the company has carried out the production of 2,000 tracked vehicles in the Turkish Armed Forces (TSK) inventory, Kurt said: "We are very pleased to take part in the medium tank development project of friendly and allied Indonesia, the home of tracked vehicles, in Turkey along with our partner, PT Pindad. When we show the performance of KAPLAN MT, which is a very special vehicle for us, on the field, the effectiveness of this design will be demonstrated more clearly."

FNSS is a joint venture company owned by Turkish Nurol Holding A.Ş., which has a 50-percent stake in the company, and British BAE Systems, Inc. which has a 49-percent stake The company is a leading manufacturer and supplier of tracked and wheeled armored vehicles and weapon systems for the TSK.

FNSS first exported the vehicle to the United Arab Emirates (UAE) in 1997, selling 133 armored combat vehicles (ACVs), marking the first time Turkey exported a defense product to another country on a main-system basis. Thereafter, 211 units were sold to Malaysia in 2000 as a result of years' worth of efforts. This export project has been Turkey's biggest main system export realized at one time to-date. On the other hand, the transfer of technology has also been realized to Malaysia via the same project. A new contract covering 56 ACVs, in different configurations, was signed in 2008.

The first contract for exports within the framework of Armored Vehicle Modernization activities was concluded with Saudi Arabia in 2004. Currently, the modernization of various types of M113 Armored Personnel Carriers of the Royal Saudi Armed Forces are being realized at the al-Kharj Maintenance and Repair facilities of the Royal Saudi Armed Forces. Management of the al-Kharj facilities is also being carried out by FNSS in the scope of the project.

Furthermore, FNSS is completing other vehicle modernization projects in partnership with the Philippines and Bahrain, providing logistics and technical support services for M113 and ACV-type vehicles for Belgium and UAE armed forces, as well.