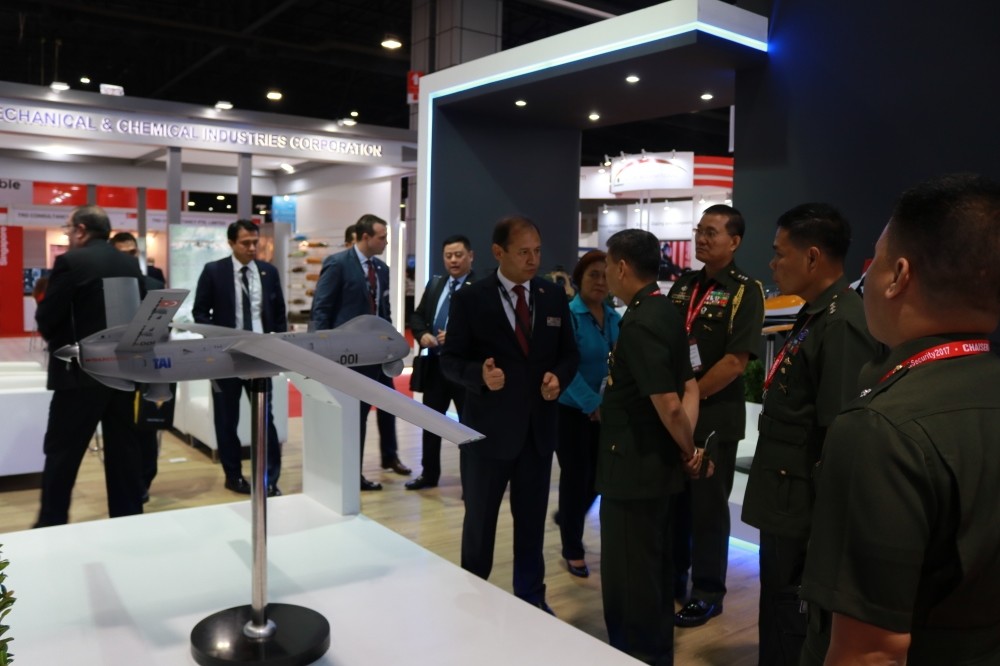 TAI officials explain Turkish defense products to the authorities from ASEAN countries at the Thailand Defense and Security Fair, Bangkok, Nov. 7.
by Daily Sabah with AA Nov 08, 2017 12:00 am

The domestic defense industry has experienced a swift transformation in less than a decade. Turkey has become more involved in co-production and co-development defense projects, which have also created export opportunities heavily sought after by the country's main defense companies.

A leading defense company, Turkish Aerospace Industries (TAI) now eyes to enter the Association of Southeast Asian Nations (ASEAN) market with the aerospace platforms it manufactures. The company is reported to have conducted a series of negotiations with the representatives and supply authorities of the countries that attended the Thailand Defense and Security Fair, which will close its gates tomorrow.

TAI General Manager Temel Kotil and company executives accompanying him have met delegations from Malaysia, Indonesia, Philippines and Vietnam as well as delegations from Singapore and South Korea and discussed the cooperation and export opportunities in the Asia-Pacific region.

ASEAN countries are an important potential export market for TAI's aerospace platforms. A proposal was already drawn up to export the ATAK helicopter to Thailand. In the upcoming days, a delegation from TAI will visit Thailand and continue its negotiations to start exports to the country.

Furthermore, the ANKA UAV drew Malaysian interest. TAI also submitted a proposal to the authorities in the country and is waiting for the results of the evaluations. For the export of ANKA, consultations with Indonesia also continue and a proposal for the platform was communicated to the Indonesian authorities.

Apart from ASEAN countries, the South Asian country of Bangladesh is reported to have shown keen interest in ANKA, armed and unarmed HÜRKUŞ and the ATAK helicopter. Negotiations for the sale of 30 attack helicopters are going with the Pakistani government. Being a pilot himself, Prime Minister Shahid Khaqan Abbasi examined the T129 ATAK Attack and Tactical Reconnaissance Helicopter, which has an important place in Turkey's defense industry exports, and participated in a test flight last month.

Following the test flight, Abbasi was reportedly said, "As a pilot, I can say this is the best and most effective attack helicopter in the world. The Pakistani Armed Forces tested this helicopter for four years in all possible conditions and to the finest detail and found it to be the number-one choice and the most successful in technical terms."

The Pakistani prime minister also informed that the negotiations are continuing positively at full speed, announcing that the Pakistani Armed Forces will add the ATAK helicopter to its inventory.

TAI is scheduled to attend the Dubai Airshow, which will run from Nov. 12 to Nov. 16 to explore opportunities in the Gulf states. The ATAK helicopter will fly in Dubai for the first time during the first three days of the fair. TAI will also bring its ANKA-S, Hürkuş and T625 helicopters to the Dubai Airshow.

TAI is the largest defense and aviation industry exporter in the country for the sixth year in a row, according to the Turkish Exporters Assembly's (TİM) evaluations for the year 2016.

TAI leads Turkey's efforts in aerospace technology and is ranked among the top 100 global players in aerospace and defense. The company has five areas of operation, including aero-structures, planes, helicopters, UAVs and space systems.

Turkish defense and aviation firms have made $1.07 billion exports worldwide in the first eight months of 2017, a slight increase from last year's $1.06 billion. The largest export of $443.9 million was made with the U.S. Germany came second with exports valuing at $140.2 million. India came in third with $66.2 million. In 2016, the U.S. was the largest defense export market for Turkey followed by Germany, Malaysia, Azerbaijan, the U.K., the United Arab Emirates, Qatar, and Saudi Arabia. The top export items in 2015 were aircraft and helicopter parts, engines, tanks and other armored land vehicle parts, ammunition, turbojets for civilian aircraft, hunting rifles, and receiver/transmitter equipment for military use.

According to the Turkish Defense Industry Association, Turkey currently exports one-third of its defense industry production, worth about $5 billion. Meanwhile, according to the Undersecretariat of Defense Industries (SSM), the current domestic participation rate in defense projects is 50-60 percent and the defense industry has an aggressive goal to reach $25 billion and be self-sufficient by 2023. The SSM data of Turkey's 2016 defense exports reached $1.9 billion, which was $487 million in 2006.