Turkey spent $60B on 553 defense projects, 65 pct of production domestic 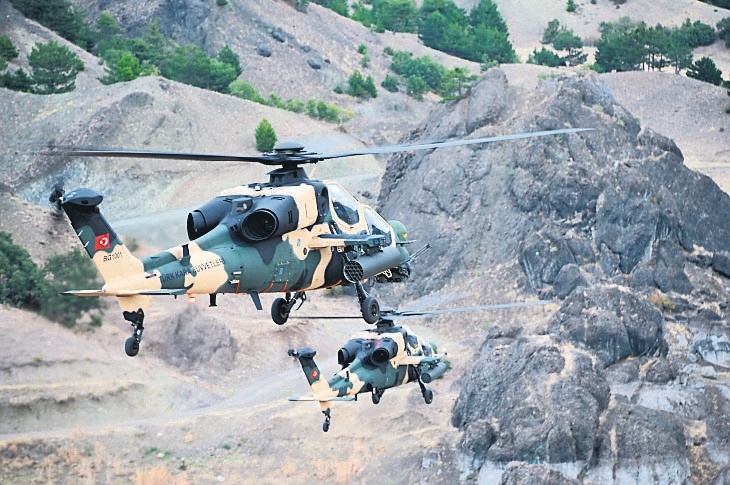 Turkey's growing defense industry has posted a turnover of $6 billion, while it's current 553 projects, which use 65 percent domestic materials, were worth $60 billion

Turkey has been heavily investing in the defense sector with local and global partners but the rate of domestic production whereby local resources are used in the development of defense projects and equipment has increased to 65 percent while the cost of projects jumped to over $60 billion from $5 billion over the past 15 years.

While elaborating on Turkey's fight against terrorism, Prime Minister Binali Yıldırım also provided details regarding projects and domestic defense industry exports at a meeting on public security and counterterrorism at the Gendarmerie General Command in Ankara on Friday.

The prime minister also said that the total number of defense projects increased to 553, while 15 years ago there were only 66. The cost of these 553 projects exceeded $60 billion as Turkey spent $5 billion in these projects in the said period. The total turnover of the industry also rose to $6 billion from $1 billion.

According to the data obtained from the Undersecretariat of Defense Industries (SSM) as of 2016, total sales in the defense and aeronautics sector by defense industry firms and the size of the entire defense and aeronautics sector turnover reached $5.9 billion. Moreover, defense industry products exports, which are of critical importance in terms of the sustainability of the sector, increased to $1.6 billion.

Turkish defense industry companies HAVELSAN and BİTES have demonstrated their ambition for military training and simulation solutions with their expertise in the area.

As part of the conference, the results of the annual contest organized by one of the most prominent simulation and training industry periodicals, the Military Simulation & Training Magazine (MS&T), were announced. The contest awarded the globally pioneering firms that offer the best technology, service and solutions in military simulations and the training sector.

HAVELSAN and BİTES were named among the finalists for the 2017 Industry Simulation and Training Awards. At the contest, which awarded SAAB Defense and Security, Rheinmetall Electronics, Rockwell Collins, Lockheed Martin, Leonardo Helicopters, L3 Link Simulation&Training, Cubic Global Defense, and Elbit Systems, Turkey's software and systems company having business presence in the defense and information technology sectors, HAVELSAN, and the Turkish software development company at the forefront of simulation training solutions for military and civilian organizations, BİTES, were recognized among the world's leading defense countries.

BİTES, which entered the defense industry with the tenders that the SSM organized in 2004, contributed to many projects.

Growing with exports to Germany and the Middle East, BİTES engages in long-term U.S. and Italian companies.

BİTES General Manager Uğur Coşkun said the need for the simulation and training sector grows further amid improving military technologies and complicated war environments. Being named among the internationally acknowledged lists boosts the company's confidence, Coşkun said, as it also supports the firm's reputation in the international platform.

Coşkun also recalled that leading Turkish defense firms ASELSAN, Turkish Aerospace Industries (TAI) and ROKETSAN are among the prominent 100 global defense firms and said, "The fact that BİTES and HAVELSAN are named among the leading 100 firms in simulation is the success of our state and the SSM. When given the opportunity, we have become a global player in the sector."

It is expected that the market size of simulation and training technologies, which stood at $10.5 billion last year, is expected to reach $13 billion in 2021. A total of 61 percent of the resources devoted to international simulation and training technologies is spent in the U.S. Therefore, the award granted in the U.S. is of great importance in terms of increasing the effectiveness of BİTES in the sector on an international scale.

In an attempt to open offices in countries where it has the responsibility for responding rapidly to changing customer needs and quick adaptation to emerging technologies, BİTES offers the opportunity to expand overseas for talented entrepreneurial companies in its ecosystem.

BİTES makes pioneering research and development (R&D) investments supported by the Scientific and Technological Research Council of Turkey (TÜBİTAK) and the SSM in-line with new technologies and practices around the world.

BİTES, which has developed the Trans-Armor Vision Goggle enabling those inside tanks to see outside in cooperation with ASELSAN, has also carried out a cabled, multi-rotor unmanned aerial vehicle project, which enables the crew inside armored vehicles to easily and safely detect an area from a certain distance.

BİTES plans to integrate emerging technologies such as augmented reality and artificial intelligence into simulation and training projects to ensure that it is progressing toward its long-term goals with firm steps.

Within this concept, the company is working on a range of projects in the areas of artificial intelligence, augmented reality, image processing, simulation and software technologies.