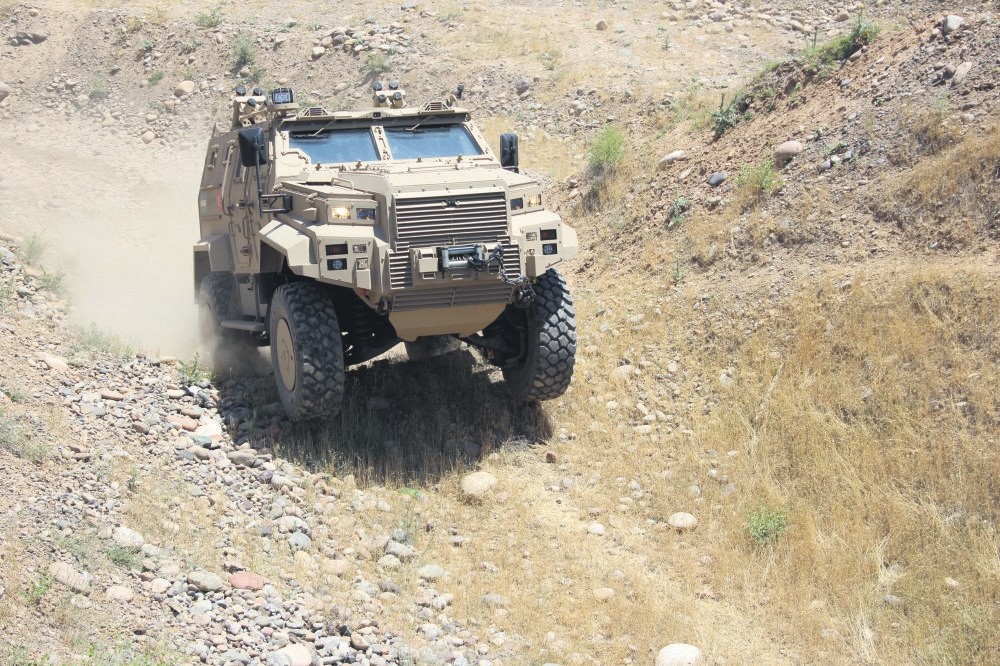 A project tendered by the SSM and undertaken by Nurol Makina, the armored combat vehicle Ejder Yalu00e7u0131n is not only delivered to the Turkish Armed Forces but it has also been exported to Tunisia while receiving demands from 10 other countries.
by Daily Sabah with AA Dec 21, 2017 12:00 am

The number of defense projects run by the Undersecretariat for Defense Industries has reached 600 with a 65 percent local production rate, compared to 66 projects in 2002

Since its establishment in 1985, the Undersecretariat for Defense Industries (SSM) has worked hard to build the blocks for a modern national defense industry to reduce Turkey's dependence on external sources. The SSM and other agents operating in the defense sector are currently working on 600 projects, İsmail Demir, who leads and oversees SSM's efforts, elaborated on Turkey's defense strategy at a meeting in Ankara.

Demir recalled that when he was appointed to the SSM in 2014, the number of defense projects under the state defense body was around 300, but he indicated that currently the SSM manages 600 projects. In 2002, the SSM had 66 defense projects, and 80 percent depended on external resources. "In 2017, the SSM launched 50 projects, and we have 40 more projects that were concluded in accordance with 22 decisions by the Board of Directors of the SSM and await final signatures," Demir said.

The undersecretary underscored that a significant number of armored personnel vehicles and battle vehicles have been delivered for service. He also said the Turkish defense industry has made considerable progress and started deliveries of smart bombs, wing assisted guidance kits, precision guidance kits and laser guidance kits. "The advance made in precision guidance kits, which we asked the U.S. to purchase but have not been able to fully receive our orders are particularly important to note," Demir said.

Undersecretary Demir also announced that development projects to build engines and transmission equipment for land and aerospace vehicles with domestic resources have been launched, noting that deliveries of the Turkish-made MPT-76 rifle continue.

The MPT-76 assault rifle has begun serving the country's allies, security sources previously told Anadolu Agency (AA). The state-run Mechanical and Chemical Industry Corporation (MKEK) and other defense industry companies, Kalekalıp and Sarsılmaz, have been given orders for mass production of the rifle. MKEK, Kalekalıp and Sarsılmaz will produce 20,000, 15,000 and 10,000 rifles, respectively.MKEK has delivered 3,200 rifles so far, and 500 of them were given to the Turkish presidency. MKEK plans to deliver the rest in 2018.

Somalia, which is dealing with an insurgency, received 450 rifles. In addition to Somalia, the Turkish Republic of Northern Cyprus (KKTC) added the rifle to its inventory. The TRNC has ordered 2,500 rifles.

After success in 47 NATO tests, the MPT-76 rifle, named after the Turkish acronym of the National Infantry Rifle and the caliber of its 7.62 millimeter NATO round, is billed as being as "effective as the G-3, as reliable as the AK-47 and as practical as the M-16."

The rifle can be semi-automatic and automatic, and its magazine capacity is 20 bullets. The MPT-76 can be customized through its rail system, meaning compatible accessories, including a night vision riflescope, can be added or removed.

Demir indicated that more than 100 Kirpi mine resistant tactical wheeled vehicles, more than 3,000 kobra armored tactical vehicles and more than 230 Ejder Yalçın armored tactical vehicles with a unique platform that has protection and mobility have been delivered to the TSK so far. He also noted that the SSM received a bid for the mass production of the main Altay battle tank, which be produced after the review of proposals.

The undersecretary said 26 ATAK tactical reconnaissance helicopters have been delivered, while preparations for the 27th ATAK is underway. Moreover, 43 unmanned air vehicles, 38 of which are tactical and five are operative, are currently in service. Ten out of 74 UAVs are armed, he noted.

Demir also announced that the SSM will hold new contests similar to design contests for unmanned, autonomous land vehicles and underscored that industrialists must support and contribute to such projects.

As of 2016, total sales in the defense and aeronautics sector by defense industry firms and Total Defense and Aeronautics Sector turnover reached $5.9 billion. Exports of defense industry products, which are of critical importance to the sustainability of the sector, increased to $1.6 billion.