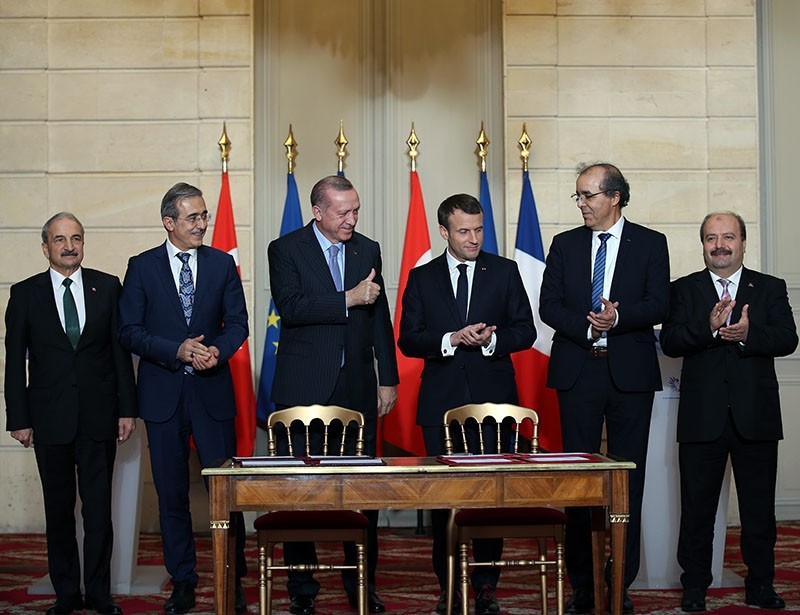 President Erdoğan's first visit abroad in 2018 was marked by a groundbreaking defense agreement that includes the joint development of missile systems by Turkish, French and Italian firms, among other commercial and economic deals

His visit to France on Friday marked an extraordinary step in strengthening Turkey's efforts to enhance and speed up its domestic defense system. The negotiations in France brought closer defense cooperation with France and Italy as Turkey awarded a long-range air missile system development and production project to French-Italian consortium Eurosam and its Turkish partners Aselsan and Roketsan.

Eurosam, the industrial prime contractor and system design authority for the development, production, marketing and sales of a range of medium and long-range naval and ground-launched air-defense missiles, announced on the sidelines of a meeting in Paris between Erdoğan and French President Emmanuel Macron, that it will lay the ground for a development and production contract. The three-country missile program is expected to be ready by the middle of the next decade to safeguard against threats from stealth aircraft, drones and missiles.

In a statement, Eurosam said: "The joint development activity is expected to support Turkey's domestic air and missile development program in addition to opening up prospects for exports and longer-term cooperation between Turkey, Italy and France."

Speaking at the joint press conference, President Recep Tayyip Erdoğan emphasized the centuries-long bilateral ties between Turkey and France. He said that the meetings as part of the visit resulted in a number of economic, commercial and defense agreement and particularly noted the Eurosam agreement, stressing that bilateral ties have strengthened more with these meetings.

"The Eurosam agreement is a very significant step. As two members of NATO, we are determined to broaden our cooperation," the president said, adding NATO member Italy is also a member of the agreement.

"Now, it is time to act on the agreement immediately and accelerate the process to start production," Erdoğan said.

Established in June 1989 by three major European aerospace companies, the Eurosam consortium is made up of European missile maker MBDA, itself a joint venture between Airbus and Italy's Leonardo and Britain's BAE Systems, and French defense contractor Thales, whose main shareholders are the French state and fighter jet maker Dassault Aviation.

On Nov. 8, Turkey signed the joint Eurosam consortium agreement with the Italian and French defense ministers in an inter-governmental agreement at NATO headquarters in Brussels. The project with Eurosam, the producer of SAMP/T and Aster 30 long-range SAM systems, will strengthen defense ties between the three countries in general and particularly in air and missile defense.

The SAMP/T Aster 30 system uses a network of sophisticated radars and sensors, including 3-D phased array radar, enabling it to be highly effective against all types of air threats. The system can intercept missiles with a 600-kilometer range and can operate in standalone mode or can be integrated in a coordinated network such as the NATO missiles defense system.

Turkey's Aselsan and Roketsan have been developing the Low Altitude Air Defense Missile System (HİSAR-A) and the Medium Altitude Air Defense Missile System (HİSAR-O) using national resources to meet the low- and medium-altitude air defense needs of the Turkish Land Forces Command. The Hisar-A will be completed by 2020, and the medium-range defense system's prototype will be completed by 2021.

As stipulated by the agreement, Turkey Electricity Generation Company (EÜAŞ) will hold a 49 percent stake in the plant while Japan's MHI and France's Engie will hold a share of 51 percent. The project is estimated to cost more than $16 billion, according to Japanese sources.

France is Turkey's sixth-largest trading partner both in imports and exports. According to information from the Turkish Statistical Institute (TurkStat), bilateral trade between Turkey and France was $13.3 in 2015, including $6 billion in Turkish exports to France and $7.3 billion in imports to Turkey. Turkish Exporters' Assembly data shows that Turkey's exports to France totaled $6.3 billion in 2017.Referring to bilateral trade, Erdoğan said that the two countries aim to increase their trade volume to 20 billion euros. "Once Turkey and France work together, it is feasible to achieve this figure in bilateral trade," he said. He also said that in order to achieve 20 billion euros in bilateral trade, ministers and state bodies must work in cooperation.

Macron stressed the strong economic ties between Turkey and France and said that both parties have agreed to enhance bilateral trade, starting with 5,700 tons of red meat exports to Turkey.

Among the main exports from Turkey to France are road vehicles, clothing and accessories, electrical machinery and devices. Among the main imports from France to Turkey are planes and air vehicles, iron and steel products and automobile parts.

Currently, 1,366 companies with French equity operate in Turkey in beauty, energy, food, banking, insurance, manufacturing and the automotive industry. France is 10th in terms of the number of foreign companies operating in Turkey. From 2002 to October 2017, French direct investments in Turkey reached $6.9 billion. France ranks ninth in terms of foreign direct investments in Turkey, while 47 Turkish companies are reported to operate in France with an investment of $750 million. Turkish companies are concentrated mainly in energy, furniture and equipment, textiles and clothing, transportation, electrical machinery and devices, finance, plastic products, storage, logistics, services (restoration, repair and renovation), chemical goods (packaging), production of automobile parts, marketing of agricultural and food products, glass and ceramics.

Macron stressed the strong economic ties between Turkey and France and said that both parties have agreed to enhance bilateral trade, starting with 5,700 tons of red meat exports to Turkey.