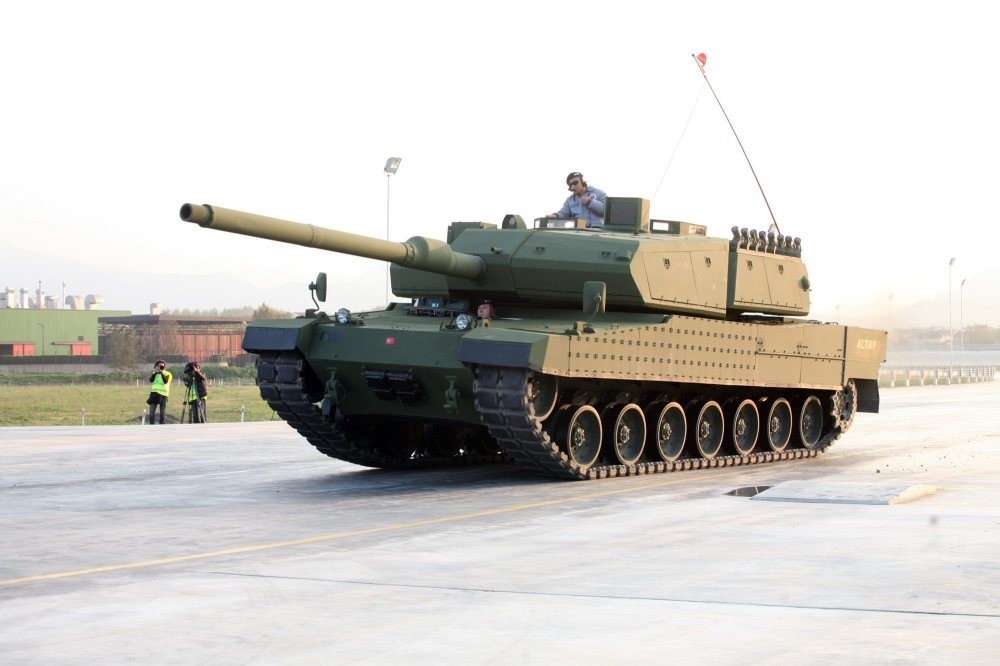 National Defense Minister Canikli said the Altay tank will be completely domestic with mass production likely to begin in late 2019 or early 2020.
by Eda Işık Jan 12, 2018 12:00 am

As preparations to award the powertrain and mass production contracts for Turkey's first domestic battle tank, the Altay, continue, the tank is already drawing attention from international buyers

Turkey's first fully homegrown main battle tank (MBT), Altay, which is currently under development, is drawing significant attention from international buyers, particularly from the Middle East, Asia, and western Europe, National Defense Minister Nurettin Canikli has said. Talking to a group of journalists, Minister Canikli said Turkey's defense exports saw steady growth in 2017, reaching $1.74 billion. He also confirmed receiving a number of bids to mass produce Altay and said they were currently being evaluated. Canikli said that the government was looking at different criteria before awarding the project to the best bidder.

"Excluding any person or any group from the bidding process is out of the question. It is being executed in an open manner," National Defense Minister Canikli said.

The minister said Altay will be completely indigenous, with mass production likely to begin in late 2019 or early 2020. He added that Turkey was open to exporting its range of locally developed weapons.

"We are doing market studies in different countries. There is a serious demand for our self-propelled howitzer, Fırtına (Storm), Altay MBT and a number of other weapon systems," he added.

Canikli informed that the ministry has held a separate study for Altay's engine, the contract for which will be awarded in separate bidding.

"The product, however, will be one piece. The engine is the only problem in making the tank fully indigenous. There is no problem with the rest of the components," he said.

Turkey looks to finalize a contract to build 500 units (250 optional) within a maximum of three months.

In June, the Undersecretariat for Defense Industries (SSM) did not accept Otokar's proposal, announcing instead that the mass producer will be selected through a bidding process.

Otokar issued a statement citing reasons behind the rejection, saying, "The SSM has informed us today that the bid's administrative, financial and technical aspects have been assessed but was found to be inappropriate due to no agreement on contract terms; specifically pricing, leading to the decision for contractual bidding."The SSM in its 2017-2021 Strategic Plan has set 2020 as the primary date for the first Altay tanks to enter service.

Altay is a third-generation MBT and Turkey's first indigenous tank development program. The tank was named after Gen. Fahrettin Altay, who commanded the 5th Cavalry Corps during the Turkish War of Independence.