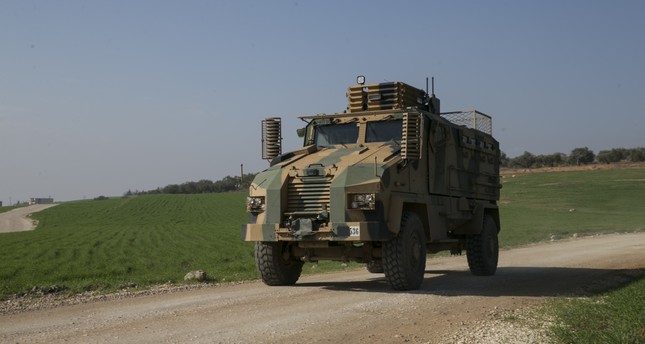 Kirpi is one of the domestically produced vehicles the Turkish Armed Forces (TSK) is using in Operation Olive Branch in the northwestern Syrian region of Afrin.

He said that external dependency, which was around 80 percent 16 years ago, has rapidly declined with the nationalization of projects. Altunyaldız added that Turkey had a defense industry that was monopolized by international defense companies.

"Today, our defense industry has transformed into a national structure with the involvement of more than 1,000 companies, small- and-medium-sized enterprises [SMEs], research institutes and universities. The rate of meeting the needs with domestic resources has increased from 25 percent to more than 60 percent," he said.

In order to secure its borders against threats of terrorism from northern Syria, Turkey launched Operation Olive Branch in the northwestern Syrian region of Afrin to eliminate the risks posed by the PKK terrorist organization's Syrian affiliate Democratic Union Party's (PYD) People's Protection Units (YPG) militia. Since the first day of the operation on Jan. 20, Turkey has been using domestically developed vehicles, arms and ammunition to a significant extent.

Speaking of the ongoing military Operation Olive Branch in northwestern Syria's Afrin, Erdoğan said that if Turkey had not carried out the work and development in the defense industry in the past 15 years, it would not be able to carry out the counterterrorism operations at home, let alone abroad with Operation Olive Branch.

"The production process lasts a long time, but we act with the understanding that a product must be a product of our country," Erdoğan said.

Explaining that the government's priority is to develop and produce all kinds of defense needs inside Turkey, Erdoğan said the country has completely abandoned the purchase of ready-made defense products, except for those it urgently needs.Prime Minister Binali Yıldırım previously said that 70 percent to 75 percent of the ammunition used in the Operation Olive Branch was domestically made and that the most important weapon being used in the offensive is domestically made unmanned aerial vehicles (UAV).

Altunyaldız said that production and research and development (R&D) are the two elements that stand out and that have played an important role in the development of the defense industry.

There is currently TL 24 billion of R&D spending in Turkey, Altunayldız said, adding that TL 5 billion ($1.33 billion) of that amount was made in the defense industry.

"R&D expenditures in Turkey in 2016 increased 20 percent compared to the previous year to TL 24.6 billion. Compared to 2010, this figure has grown over twofold. Sixty percent of workers in this industry are engineers and technical staff," he added.

He also said that out of 100 companies working in the defense industry around the world, three are Turkish firms and there is a very rapid increase in R&D spending and exports.

A major part of Turkey's total R&D expenditures of TL 24 billion was carried out in the domestic defense industry, Altunyaldız said.

Suggesting that it was the R&D factor that leaped up the defense industry, Altunyaldız said that it is the factor that transfers, internalizes and generates the technology.

Concerning the defense industry's 15-year development, Altunyaldız said that Turkish security forces are using the latest technology with weapons produced by the defense industry with local and national resources, stressing that in the light of the information gathered by the commission, Turkey has stepped into a new age in this field.

Altunyaldiz said that new projects have been launched on joint production based on domestic development and technology transfer, adding that the off-the-shelf procurement model from abroad, which was mainly applied to previously, was abandoned.

The past 15 years have seen significant developments in defense, security, aviation and space fields and Altunyaldız said that a number of national projects were put into action.

Altuyaldız also said the success of R&D expenditures and engineering of defense industry pioneers such as HAVELSAN, ASELSAN, TAI and ROKETSAN is not a coincidence.

"These companies allocate very important amounts of their turnovers to R&D expenditures. More than 60 percent of the staff is R&D personnel. They have R&D centers and technoparks."

Share on Facebook Share on Twitter
Previous in Defense The Hürkuş-B aircraft, designed and upgraded by Turkish Aerospace... Next in Defense The Defense Industry Executive Committee met Wednesday under the chairmanship...
DAILY SABAH RECOMMENDS