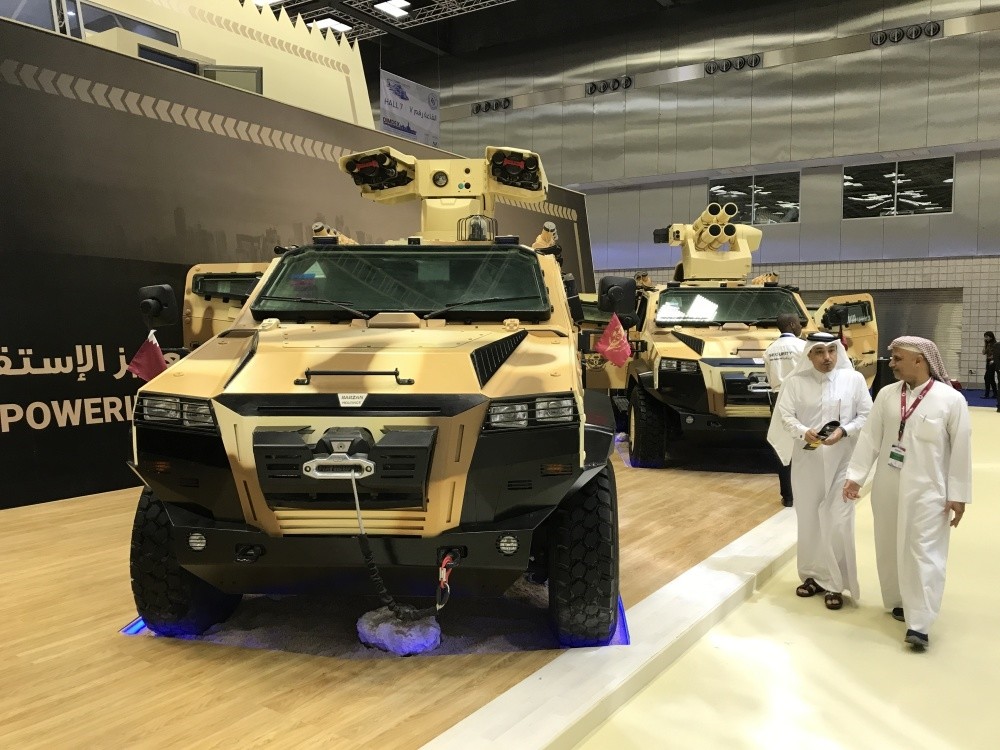 Nurol Makina signed a memorandum of understanding with Qatar's special forces to supply its NMS 4X4 armored vehicle (above), which was unveiled for the first time at DIMDEX 2018.
by Daily Sabah with AA Mar 17, 2018 12:00 am

Turkish firms have expanded their defense partnership with Doha in a number of deals signed to deliver products for Qatar's land, maritime and air forces at a defense exhibition in the country's capital

Under coordination of the Undersecretariat of Defense Industry (SSM), 33 Turkish defense firms participated in the 2018 Doha International Maritime Defense Exhibition and Conference (DIMDEX).

The fair, which ran from March 12 to March 14, yielded fruitful outcomes for Turkish defense firms that signed deals worth approximately $800 million. The value of the deals, which were made to respond to the needs of the Qatari security forces, corresponds to 46 percent of Turkey's annual defense exports worth $1.74 billion.

Baykar, the maker of the Bayraktar TB2 Unmanned Aerial Vehicle (UAV), made its first export deal on Friday.

Accordingly, six TB2 armed UAV platforms, three ground control station systems and equipment and a UAV training simulator will be delivered to Qatar within a year.

The Bayraktar TB2 UAV, which has been in operation in Turkey since 2015, and recently used in Operation Euphrates Shield and currently in use in Operation Olive Branch, has been attracting attention abroad.

It was developed for tactical reconnaissance and surveillance missions and can also carry ammunition and has laser target acquisition. Its sensors can operate at both day and night.

The signing ceremony was attended by the commanders of Qatar's armed forces, Turkey's SSM officials and Baykar CEO Haluk Bayraktar.

After the UAVs are delivered, Baykar will train the Qatari armed forces and provide logistical and technical support.

"Qatari officials looked at technologies from the U.S., Europe and China before they decided," Bayraktar told reporters.

One of Turkey's armored vehicle producers, Nurol Makina, signed a memorandum of understanding with Qatar's special forces to supply 214 NMS 4X4 armored vehicles within two years. This will make Qatar first country to include NMS vehicle in its military inventory.

Along with Nurol Makina and BMC, various ammunition systems developed by Turkey's leading defense firm ASELSAN will be exported to Qatar.

In the agreement, Anadolu Shipyard will build two armed war training ships, which will be able to provide training to 72 people, and deliver them within three years.

The partnership deal, BARQ (Arabic for lightning), is particularly for producing ASELSAN's stabilized advanced remote weapons system and electro-optical reconnaissance and surveillance systems. The deal was signed by the directors of ASELSAN and Barzan Holding on the sidelines of the fair.

Barzan also signed a memorandum of understanding with Turkey's SSM to explore opportunities for cooperation.