US approves $1.3 billion sale of artillery to Saudi Arabia at end of crown prince's tour 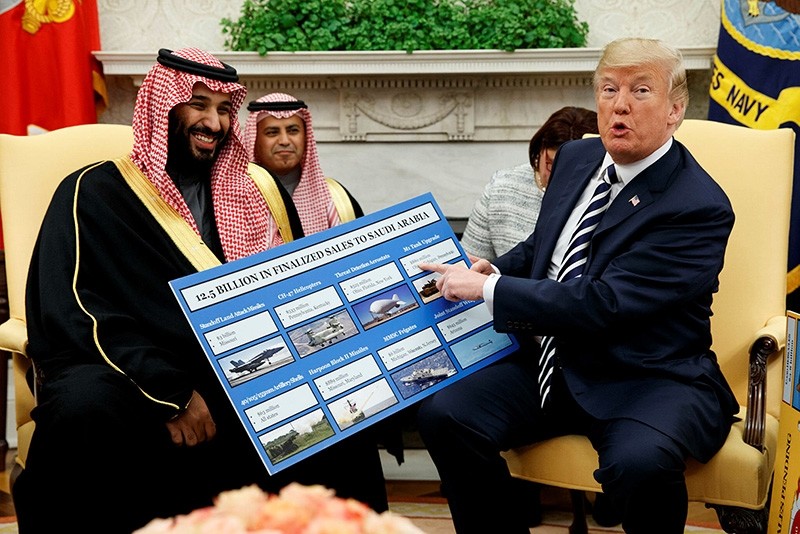 The Trump administration signed off Thursday on selling more than $1.3 billion in artillery to Saudi Arabia, giving a vote of confidence to the Saudi military as young Crown Prince Mohammed bin Salman concludes a marathon tour of the United States.

Since Prince Mohammed arrived in the U.S. two weeks ago, the administration has green-lighted more than $2.3 billion in arms sales to the kingdom, including more than $1 billion in missiles while the crown prince was in Washington. The latest deal includes about 180 Paladin howitzer systems, artillery-firing vehicles on tracks. The vehicles look like a combination of a tank and a cannon, and launch 155mm shells.

The Trump administration told Congress on Thursday that it plans to approve the sale, the State Department said, triggering a 30-day window in which lawmakers could act to try to stop it. Typically, the administration obtains informal approval for such deals from key lawmakers before making them public, indicating that Congress is unlikely to act to block the sale.

The Defense Security Cooperation Agency, part of the U.S. military, said the sale would "contribute to the foreign policy and national security of the United States" by boosting the capabilities of a key U.S. partner that contributes to "political stability and economic progress in the Middle East." The agency said the artillery would help the Saudis modernize their military and improve their ability to cooperate with the U.S. military.

Yet the sale comes amid continuing concerns in Congress and by humanitarian groups about alarming rates of civilian casualties inflicted by the Saudi-led coalition fighting in Yemen. Even President Donald Trump has raised his concerns about that in the past, and for a while, the U.S. stopped selling certain munitions to the Saudis while demanding that they improve their targeting. The U.S. is not engaged in the Saudis' bombing campaign in Yemen, but has supported the coalition with refueling, targeting information and other logistics.

The Trump administration and the United States more broadly have laid out the red carpet for Prince Mohammed, the 32-year-old heir to the throne, who is on an ambitious mission to modernize Saudi Arabia and improve its image in the West. After stops in Washington, New York and Boston, the crown prince has spent this week on the West Coast meeting with prominent business and entertainment leaders. He plans a final stop in the energy hub of Houston on Saturday before returning to Saudi Arabia.

During Trump's visit to Riyadh last year — the first stop on his inaugural foreign trip — the two nations announced that the U.S. would sell $110 billion in military equipment to Saudi Arabia. They said the deal could grow to $350 billion over a decade and include tanks, combat ships, missile defense systems, radar and communications, and cybersecurity technology. Tens of thousands of U.S. jobs could be created, the State Department said at the time.

But no details were announced then, owing in part to the fact that the individual sales require approval from Congress that Trump by himself could not guarantee. Officials said the $1.3 billion in artillery and $1 billion in missiles announced during Prince Mohammed's visit are both part of that broader package.