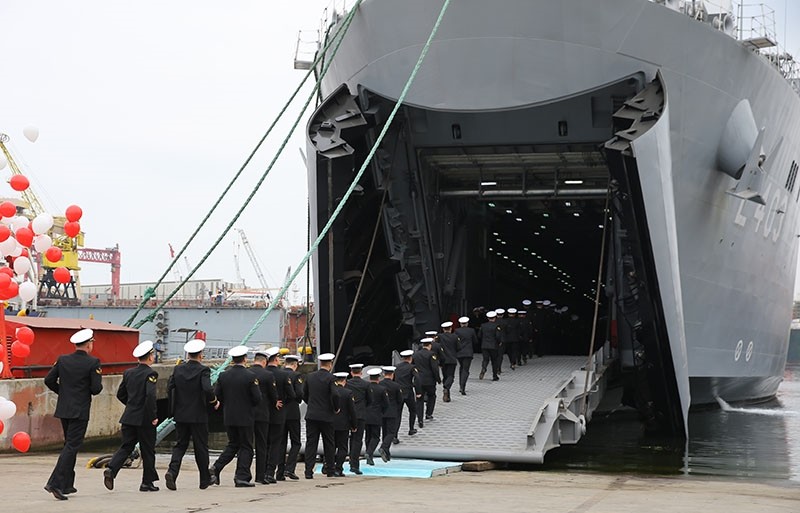 After a long and much anticipated wait, the TCG Sancaktar amphibious landing ship tank (LST) has been delivered to the Turkish Naval Forces Command on Saturday.

Speaking at the delivery ceremony, Undersecretary of Defense Industries (SSM) İsmail Demir said that they have so far delivered 40 maritime platforms to the Turkish Naval Forces and 20 platforms are being constructed. "We will expand such platforms that are existent in only a number of countries around the world," Demir said.

The ship was built by Anadolu Deniz İnşaat Kızakları Sanayi ve Ticaret A.Ş. (ADIK Shipyard) within the scope of the Amphibious Ship (LST) Procurement contract that was executed by the Undersecretariat for Defense Industries (SSM).

TCG Sancaktar was built as single-boat and displacement type with a completely steel construction. The vessel's upper building is ballistic protected. It has full personnel protection against nuclear, biological and chemical attacks.

Built entirely with steel and a domestic and original design, TCG Sancaktar has a helicopter platform that will allow the landing and take-off of helicopters weighing up to 15 tons. There are also four landing craft, vehicle, personnel (LCVP) on the ship, each capable of carrying 8 tons of cargo or 40 people and speeds up to 20 knots. The ship has a length of 138.75 meters and a width of 19.60 meters. It is capable of carrying 1,200 tons of freight at various loads and can accommodate 486 staff members.

Electricity on board is generated by four main generators with the addition of an emergency generator.