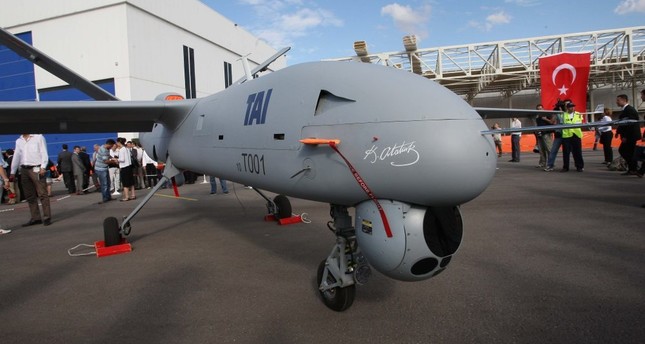 Carrying out works in order to bring to an end the critical external dependence on unmanned aerial vehicle (UAV) engines, Turkey is now preparing to export its own product

Taking successful steps to end the external dependence on unmanned aerial vehicle (UAV) engines, Turkey aims to export engines in the near future.

TUSAŞ Engine Industries, Inc. (TEI), Turkey's center in aerospace engines, is getting ready to reap the fruits of the projects conducted on the UAV engines.

TEI, which launched the mass production of the PD155 engine developed within the framework of ANKA-S Engine Modification Project and delivered the first nine engines to Turkish Aerospace Industries Inc. (TAI), successfully carried ANKA to the sky with the first engine upon the completion of its aircraft integration studies. The PD155 engine successfully performed flight tests at different altitudes and speeds after verification, ground and taxiway tests.

One of the first prototypes of the PD170 engine, which was completely developed by TEI engineers within the scope of Operational UAV Engine Development Project, was delivered to TAI. The integration of PD170 engine into ANKA continues.

TEI General Manager Mahmut Akşit said in the PD155 project, they developed an engine equivalent to ANKA's existing engine, adding that they accomplished this by converting a commercial engine into a military instrument.

Noting that ANKA realized its first flight with this engine in February, Akşit said since the numbers are not too high, the transformed engines in the UAV sector are quite common, informing that a commercial engine is converted into a military engine that can operate at 30,000-40,000 feet in this regard. "The engine performing the first flight was converted from a commercial engine. It can exactly provide requirements of ANKA's existing engine," Akşit said. "It performed the first flight and even the second longer flight successfully. Our TAI team will continue to test the engine under different conditions. We took this engine under mass production. We delivered nine units last year."

Aksit said the TEI-designed PD170 engine is more powerful than the current 155-165-horsepower engine and that it can generate power over 170 horsepower.

Highlighting that the engine can go up to 20,000 feet at full throttle without losing power, Akşit recalled that most operating altitudes are between 20,000 and 25,000 feet. "This new generation engine has not made its first flight. It is a diesel engine that can easily take ANKA up to 40,000 feet and also increase the cargo capacity of this vehicle. The first engine was delivered to TAI in November 2017, and integration work started," he continued. "I predict that within a few months the first flight will take place once the integration work is completed. We are expecting it around mid-summer. We are planning to go into the serial production before the end of this year. We will deliver the first five engines this year."

The PD170 engine developed for ANKA offers new opportunities to consider the needs of different possible platforms beyond ANKA.

Thanks to the dual-stage special turbocharger system, the PD170 will be the first and only turbo-diesel UAV engine to be able to work at 40,000 feet all over the world.

Negotiations with potential customers for the PD170 engine are expected to accelerate this year.

Aimed to be a solution to the critical external dependence of Turkey's UAV systems, the PD170 was able to grab the attention of the leading foreign UAV manufacturers.

It is expected that after the first flight, the engine will further attract the interest of foreign customers and turn into concrete projects, thus enabling Turkey to realize the sales of the UAV engine in addition to its production.

Explaining that they have made serious progress in the helicopter engine project, Akşit said they have passed to the conceptual design phase, adding that they actually made an initial prototype, but that the core engine that will meet the requirements of the project will be operational within one to one-and-a-half years. "The helicopter engine is also a jet engine. It is an engine that can power up to 1,660 horsepower in half a minute at 400 horsepower. We are going to acquire the jet engine design technology as Turkey," Akşit noted, suggesting that they will also use this on the national fighter jet project.

"Even though the scales are somewhat different, the systems are very similar and include similar subsystems in terms of system engineering. Therefore, making the helicopter engines successfully is a very serious step for the national fighter jet engine," Akşit concluded.

Share on Facebook Share on Twitter
Previous in Defense The Turkish Aerospace Industries Inc. (TAI) and ASELSAN, which are... Next in Defense Turkey's new Altay main battle tanks, whose manufacturer was just...
DAILY SABAH RECOMMENDS