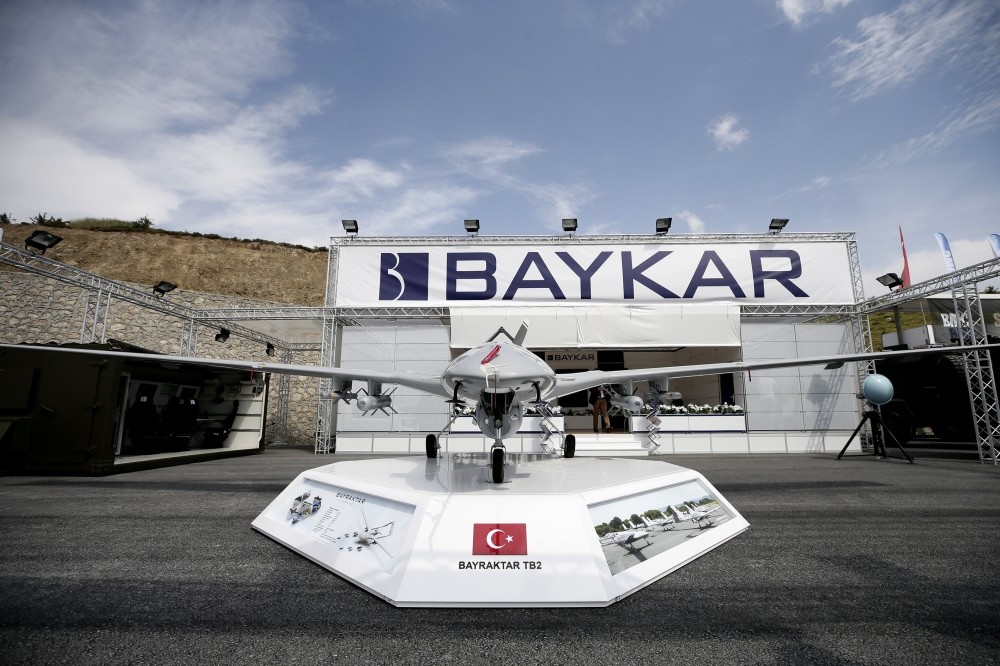 Turkey's indegeneous combat and non-combat Bayraktar drones, which have significantly contributed to the Turkish military's success in its operations against terrorism, will be equipped more effective systems

Turkey's leading unmanned aerial vehicles (UAVs) and combat drone developer Baykar will further enhance the effectiveness of its products, which have significantly proven their success with security forces using the new technologies in their operations at home and abroad.

The company will showcase the Bayraktar Tactical Block 2 (TB2) at the Efes 2018 Live Fire Military Drills (Efes-2018) to be held in Izmir's Seferihisar district. Along with the administration of the Aegean Army Command, friendly and allied countries will take part in the event, which is being hosted by Turkey.

"In this sense, we also show the point where we have arrived in terms of armed drone technology. We are using armed drones in this important drill that has international participation from 21 different countries and we are actually firing. It is really important that we have come to this level," Bayraktar said.

Bayraktar noted that the TB2 armed drone served in Operation Olive Branch. He stressed that it is a great advantage to further develop the system, which is has been working successfully in very risky situations – such as landing and taking off in difficult weather conditions. He said that this helps the engineers make software and electronic updates for the changing conditions in the field, which in turn created a multiplier effect in the armed forces.

Up to 15 UAVs and armed drones currently serve in the Turkish military, Bayraktar said and added that this number will further increase in the coming period.

"In this sense, we should pay attention to network-based architectural technologies. It is important that the data obtained here are shared in different centers. At present Bayraktar TB2 is undertaking takeoff and landing missions at very different base points," Bayraktar continued.

"Accordingly, we have been working on both image transfer systems and the procurement of data from different elements. These include an optimized image transfer system running on mobile networks with end-to-end communication. This system was developed with a stakeholder company."

He said that this system works on a tablet with end-to-end encryption, meaning that the data flow cannot be intercepted. Bayraktar said it is secure, enabling soldiers in armored vehicles or infantry elements in the field to view the UAV images over mobile networks, even at low speeds, safely through tablets in their hands, not just at headquarters and operational centers.

"This solution has just been developed and will be available in a very short time," he added.

Bayraktar also gave information about the studies on the geographical analysis system developed by PiriReis Bilişim and is used in the armed forces.

Bayraktar stressed that three-dimensional virtual sphere was developed entirely by national facilities with all the software components and most basic building blocks were domestic.

Pointing out that compared to Google Earth, which is an equivalent product, it is a system that is already faster, more efficient, and already has thousands of users in armed forces, Bayraktar said it is also a network-based and server-client-driven system.

"We integrated this system into the UAVs. We have developed the UAV module of this system together. With this system, all of the functions of multiple UAV systems, such as task routes, tracking of targets, archiving, and geographic information system, have become feasible, especially in our current central command control sites," Bayraktar said. "This is a very important achievement. This system can also work with the tablet system we have developed. These are innovations we offer in the drill."

Bayraktar said that they have developed a wide area mapping and imaging system solution. Pointing to the importance of this solution, Bayraktar stated that they developed an original camera pod with series of electro-optic cameras and integrated this pod onto the Bayraktar TB2.

He added that original software algorithms that automatically combine thousands of high-resolution images captured in pod-mounted flight tests were created.

Explaining that the Bayraktar TB2 has flown over 47,500 hours so far, he said that they will deliver six units to the gendarmerie this month.

"We are aiming to deliver 30 more armed drone systems in 2018. We will make the deliveries to the gendarmerie, sea and land forces, respectively," he concluded.

TB2 has provided critical tactical support to the Turkish Armed Forces (TSK) in the fight against terror during Operation Olive Branch in northern Syria against PKK and its armed affiliate, the People's Protection Units (YPG) in northern Syria, enabling a swift and precise victory.

During the operation, armed and unarmed TB2s carried out 382 sorties during 4,916 hours of flight time and delivered 449 direct hits.

The Bayraktar TB2 armed drones, produced by Baykar Makina and operationally used since 2015, are the first and only armed UAV to be included in the TSK inventory. They have provided effective surveillance, reconnaissance and fire support to Turkish security forces in both Operation Euphrates Shield and Operation Olive Branch. Developed and produced nationally and originally with electronic, software, aerodynamic, design and sub-main systems, the Bayraktar TB2 is one of the world's most advanced UAV systems in its class with its state-of-the-art flight automation and performance features.