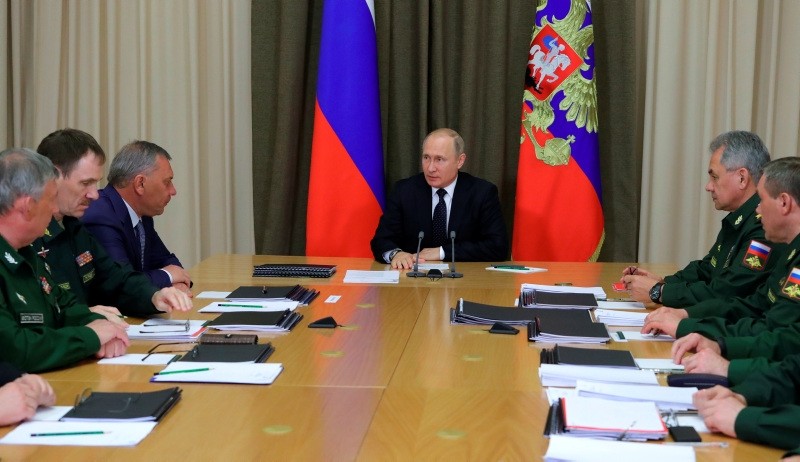 The Russian military will soon receive new nuclear weapons, which are far ahead of any foreign designs, President Vladimir Putin said Friday.

Speaking at a meeting in Sochi, Putin said delivery of the new Avangard hypersonic vehicle will begin next year, while the new Sarmat intercontinental ballistic missile will enter duty in 2020.

The Avangard and the Sarmat were among an array of new nuclear weapons Putin presented in March.

The Russian leader said then that the Avangard has an intercontinental range and can fly in the atmosphere at a speed 20 times the speed of sound. The Russian leader added that the weapon can change both its course and its altitude en route to a target, making it "absolutely invulnerable to any air or missile defense means."

Putin noted that Avangard is designed using new composite materials to withstand temperatures of up to 2,000 Celsius (3,632 Fahrenheit) resulting from a flight through the atmosphere at hypersonic speeds.

The Sarmat is intended to replace the Soviet-designed Voyevoda, the world's heaviest ICBM that is known as "Satan" in the West and which carries 10 nuclear warheads.

Putin said in March that Sarmat weighs 200 metric tons (220 tons) and has a higher range than Satan, allowing it to fly over the North or the South Poles and strike targets anywhere in the world. He added that Sarmat also carries a bigger number of nuclear warheads, which are more powerful than the ones on Satan.

Putin said the new ICBM accelerates faster than its predecessor, making it harder for the enemy to intercept in its most vulnerable phase after the launch. He also said Sarmat could carry an array of warheads capable of dodging missile defenses.

Speaking Friday at a meeting with the top brass in Sochi that wrapped up a series of such conferences with military leaders this week, Putin said Russia's new nuclear weapons far surpass any foreign designs.

"These unique weapons systems are years and, perhaps, even decades ahead of any foreign analogues," he said. "They have rendered many expensive, I would say highly expensive foreign systems, useless and outdated."

Putin emphasized that two other new systems unveiled in March — the Kinzhal hypersonic missile and the laser weapon called Peresvet — have already been put on duty with the units of Russia's Southern Military District, which are developing tactics of their use.

During his March presentation Putin also mentioned a nuclear-powered global range cruise missile and an underwater drone designed to strike coastal facilities with a heavy nuclear weapon. Officials have been coy about their deployment prospects.

The Kremlin has conducted a sweeping arms modernization program amid tensions with the West over the fighting in Ukraine, Syria and other disputes.