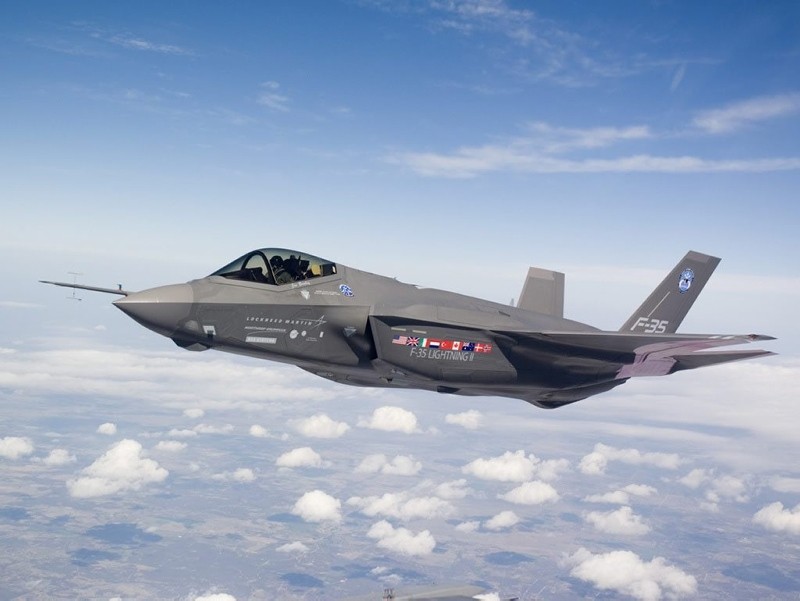 Despite recent speculation over the purchase of the Lockheed Martin F-35 fighter jets, including the U.S. Congress’ opposition, Turkey is due to take delivery of its first two jets today

Turkey, a partner in the F-35 joint strike fighter program, along with a number of countries, will be receiving its first two F-35 Joint Strike Fighters today in a ceremony in Fort Worth, Texas, the Pentagon said late Tuesday. This is despite opposition by the U.S. Congress to block delivery of the jets.

According to Pentagon spokesman Mike Andrews, Lockheed Martin will conduct a roll-out ceremony today in Fort Worth and the jets will move on to Luke Air Force Base in Arizona where Turkish F-35 pilots and technicians will receive training.

"Turkish F-35 pilots and maintainers have arrived at Luke Air Force Base and will begin flight academics soon," he told CNN.

In the amendment to the bill, senators cited U.S. pastor Andrew Brunson's imprisonment on terror charges as well as the Turkish government's decision to purchase the S-400 air defense system from Russia.

Andrews declined to comment on the bill passed by the Congress to block the delivery of the jets, and said "Turkey is one of the key members of NATO and a participant of the F-35 development project."

A U.S. defense official reportedly told CNN that U.S. Secretary of Defense James Mattis is opposed to congressional attempts to block Turkey's receipt of the advanced warplanes. The official said Mattis has been actively engaging with members of Congress in an attempt to ensure that the language in the Senate's version of the defense bill does not make it into the final version to be signed by President Donald Trump.

The amendments to the bill also contains a provision to block Trump's deal with China to allow the telecommunications giant ZTE to stay in business despite violations of U.S. sanctions against Iran and North Korea. But the amendment is not guaranteed to become law. The bill will now need to be reconciled with a House version – where the amendment could be stripped out – voted through both the House and the Senate, and signed into law by Trump.

"Necessary contacts have been made with the U.S., and delivery of the F-35 jets will be on Thursday [today]," Turkish Deputy Prime Minister Bekir Bozdağ told reporters in the central Anatolian Yozgat province on Wednesday, according to the Anadolu Agency (AA). Referring to U.S. congressional bills seeking to block the sale, he added that any attempt to make the sale conditional on the release of Andrew Brunson, a U.S. priest facing terrorism charges in Turkey, amounts to a "threat."

"There have been attempts in the U.S. Senate regarding the F-35 delivery. Two fighters will be delivered to us on June 21 and there are also attempts [to block this delivery]. We can't sustain a healthy relationship as such," Foreign Minister Mevlüt Çavuşoğlu said during a live interview with the private broadcaster NTV On Tuesday.

The foreign minister emphatically stated that Turkey is an importantly ally of the U.S. and referred to the recent agreement on Manbij in northern Syria. "Turkey would not risk its allies in the North Atlantic Treaty Organization (NATO). The U.S. senate cannot present S-400 purchases from Russia as a pretext."

Yıldırım said late Tuesday the U.S. Senate decision to block the sale of F-35 aircraft to Turkey would not affect its delivery, AA reported.

"[U.S. Senate decision] would not affect the delivery of F-35s," Yıldırım said in an interview to Turkish news channel Star TV.

"It is necessary to look into details of the background of these allegations raised in the Senate," the prime minister said, adding tensions between Turkey and the U.S. have risen over terrorist group FETÖ and American Pastor Andrew Brunson – who is facing terror charges in Turkey.

Earlier the same day, Yıldırım said the decision was an unfortunate development. "Turkey is not without alternatives. Such attempts are regrettable and are in contravention to the soul of strategic partnership."

"We will carry out our own active process, policies against those who try to limit Turkey's independence and freedom with impositions. We will also definitely take the F-35s," Çavuşoğlu told a TV program on state-run broadcaster TRT.

He said Turkey had made an agreement with the U.S. "Regarding the agreements, the necessary things were fulfilled. It is a convention," he added.

The deputy prime minister noted that mutual agreements and conventions should be realized and he thinks that it will be realized.

Apart from Turkey, the U.S., U.K., Italy, the Netherlands, Canada, Australia, Norway and Denmark are also present as participant members of the program.

Turkish firms continue cooperation in the areas of system development and drills as part of the F-35 project.

Several Turkish firms are involved in producing the fighter jets as part of Turkey's partner role in the joint program. Turkish firms participating in the F-35 project are expected to make a profit of $12 billion. For instance, Alp Aviation partook in the production of the bodywork and landing gear; Ayesaş supplied the missile remote control interface and panoramic cockpit imaging system; and Fokker Elma produced the electrical cabling and internal connection systems for the F-35s. Moreover, Havelsan provided the training systems for the F-35 jets, while Kale Aviation produced the body structure, connections and landing gear locking systems.