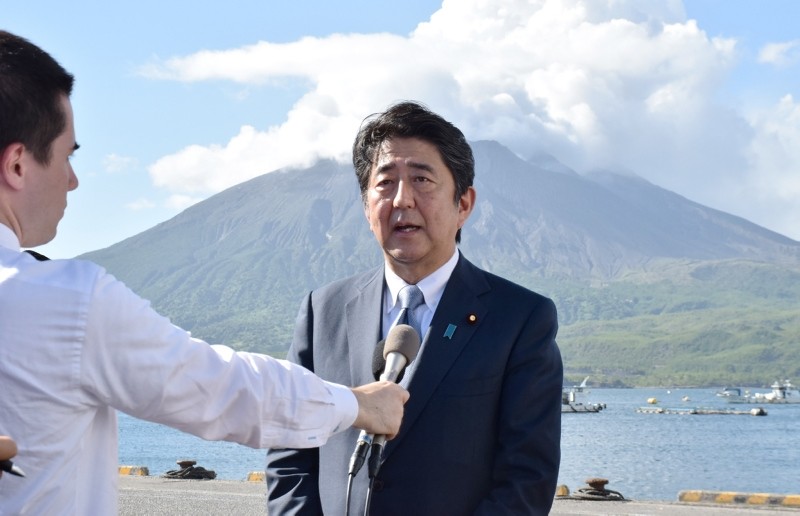 PM Shinzo Abe speaks as he announces his candidacy for the upcoming ruling LDP presidential election, during a press conference in front of Mount Sakurajima while on tour to Tarumizu, Kagoshima prefecture on Aug. 26, 2018. (Photo by JIJI PRESS / AFP)
by Compiled from Wire Services Aug 26, 2018 12:00 am

Shinzo Abe confirmed Sunday he would run in his ruling party's leadership election, putting him on track to become Japan's longest-serving premier and bolstering his dream of reforming the constitution despite flat ratings and low expectations for his economic policies.

Abe is expected to be re-elected head of the conservative Liberal Democratic Party (LDP) easily, with the vast majority of lawmakers behind him and only one challenger, former Defense Minister Shigeru Ishiba.

"I have decided to lead Japan as the LDP leader and the prime minister for three more years, and with this determination, I will run for the leadership election next month," Abe told reporters in a televised news conference.

"It is my responsibility to respond to the mandate of the people," he said.

Winning the September 20 run-off would effectively keep the hawkish Abe in power for another three-year term at the helm of the world's third-largest economy, with no real political party opposition to speak of.

Abe pledged Sunday to focus on the demographic issues raised by Japan's rapidly ageing society as well as the "tumultuous changing international situation."

In April, Abe found himself on the ropes amid twin cronyism scandals that reignited the debate over whether he had sufficient backing to win a third term as LDP leader as his approval ratings dipped.

But Mikitaka Masuyama, professor of political science at the National Graduate Institute for Policy Studies (GRIPS), predicted the election would be a "landslide victory for Abe, as he has already obtained support from an overwhelming majority of MPs."

The election is decided 50-percent by MPs and the other half by the LDP's rank-and-file members.

"There is no one else qualified to lead Japan in an environment where (President Donald) Trump's U.S. and China continue their trade battles that could hit the world economy," Masuyama told AFP.

Analysts believe Abe, 63, will seize on the expected victory to resume his push to reform Japan's post-war constitution, specifically an article that forces the country to "forever renounce war" and that armed forces will "never be maintained."

The Article 9 creates a headache for Japan's Self-Defense Forces (SDF), a well-equipped military stuck in a constitutional grey zone.

With regional tensions still high, allies have urged Japan to bolster the role of the SDF but former foes in Beijing, Seoul and Pyongyang would likely react furiously.

"The revision of the Constitution is a long-held policy goal" of the LDP, Abe said earlier this month.

"We cannot keep just discussing (it)," he said.

Revising the Allied-imposed Constitution is a very sensitive matter in pacifist Japan and an August 5 poll in the Asahi Shimbun newspaper showed 52 percent of people were opposed to changing it, compared to 31 percent in favor.

Moreover, more than two-thirds of people in an NHK poll in April said there were more pressing issues in Japan, which continues to battle deflation and problems relating to an ageing society.

According to Masuyama, Abe intends "to clarify the role of the Self-Defense Forces, and nothing more," whereas defense hawk Ishiba prefers a deeper reform of Japan's military strategy.

"It's unthinkable that Japan would take a path towards military power," said the analyst.

Abe took power in December 2012 after a landslide general election victory for the LDP, making a dramatic comeback after a bowel ailment forced him to resign the premiership in 2007 following a year in the role.

His promises were to reboot the deflation-plagued economy with his "Abenomics" policies and to bolster defense.

He has boosted defense spending and loosened constitutional limits on the military but, on the economic side, the Bank of Japan has failed to reach its 2 percent inflation target despite an ultra-loose policy.

What Abe will pursue if he wins the vote and extends his tenure as prime minister is far from clear.

"What is the economic agenda? The answer is stability - don't rock the boat," said Jesper Koll, head of equities fund WisdomTree Japan.

Currently, the longest serving Japanese prime minister is Taro Katsura, who served as premier three times between June 1901 to February 1913.

If Abe serves beyond November next year, completing more than 2,886 days as premier including his 2006-2007 term, he will be the longest serving prime minister in the country's history.

An Asahi News Network (ANN) survey published on Monday put his support at 38.8 percent, while a Kyodo news agency poll on Sunday showed support at 44.2 percent.

Ishiba, who stresses the need to revive public trust in politics and redress economic imbalances, outranked Abe among voters asked who they'd prefer to see as premier in the ANN poll, with 42 percent to Abe's 34 percent.

Among LDP backers, though, Abe was ahead with 58 percent to Ishiba's 31 percent.

Media surveys suggest Abe has the support of at least 70 percent of the 405 votes in the leadership election from LDP parliamentarians. Another 405 votes will be apportioned based on the votes of rank-and-file party members.

"Abe gets people as excited as cold pizza but will win because he co-opts, sidelines and intimidates potential LDP rivals, and doesn't have to worry about tepid public support because the opposition has imploded," said Jeffrey Kingston, director of Asian studies at Temple University Japan campus.

The opposition Democratic Party of Japan, haunted by its rocky 2009-2012 rule, broke up last year.

CDPJ support was at 5.6 percent in a survey by NHK public TV this month and that for the DPP at 0.4 percent. LDP support was 35.6 percent, with 43.2 percent backing no particular party.

In another potential positive for the LDP, a government survey released on Friday showed about 75 percent of Japanese were satisfied or mostly satisfied with their daily lives.