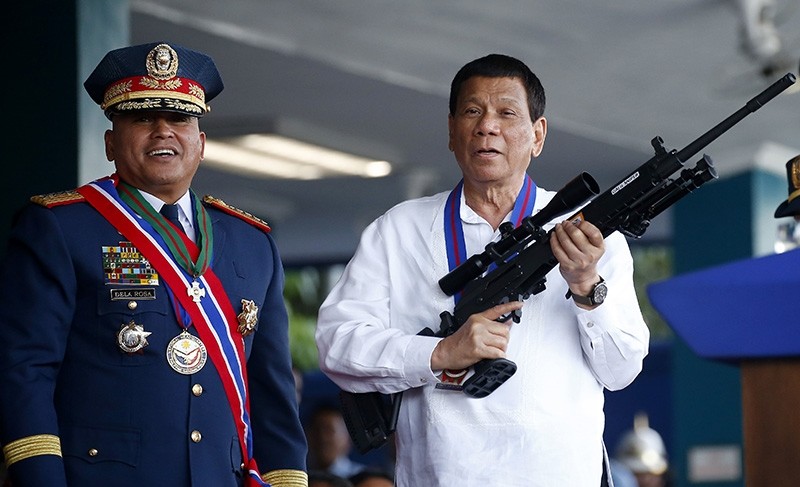 In this April 19, 2018 file photo, Philippine President Rodrigo Duterte jokes to photographers as he holds an Israeli-made Galil rifle. (AP Photo)
by Compiled from Wire Services Sep 02, 2018 12:00 am

Rodrigo Duterte, accused of committing human rights violations as part of his deadly crackdown on drugs, is on a four-day visit to Israel, the first visit of a Philippine president to the country.

Ahead of his arrival Sunday, he said he looks forward to cooperation on issues including "defense and security, law enforcement, economic development, trade (and) investments and labor."

Sales of Israeli weapons to his government are high on the agenda.

The U.S. and Canada have both seen military hardware deals fall apart with the Philippines due to concerns over Duterte's drug war. But so far sales with Israel have gone smoothly.

"(The visit) is for President Duterte to look for an alternative market for... weapons for our armed forces as well as for the police," Henelito Sevilla, an international relations expert at the University of the Philippines, told AFP.

The Philippines emerged as a significant new customer in 2017 for Israel, with sales of radar and anti-tank equipment worth $21 million.

Duterte drew global condemnation for comparing himself to Hitler in 2016.

"Hitler massacred 3 million Jews. Now there are 3 million drug addicts (in the Philippines). I'd be happy to slaughter them," he said. He later apologized.

More recently, he forcibly kissed a woman on stage and said there would be many rape cases in a Philippine city "if there were many beautiful women."

The visit is not the first pass Netanyahu has given to authoritarian leaders out of political and economic considerations. He's also welcomed Hungary's Viktor Orban, Poland's Andrzej Duda and, most notably, U.S. President Donald Trump.