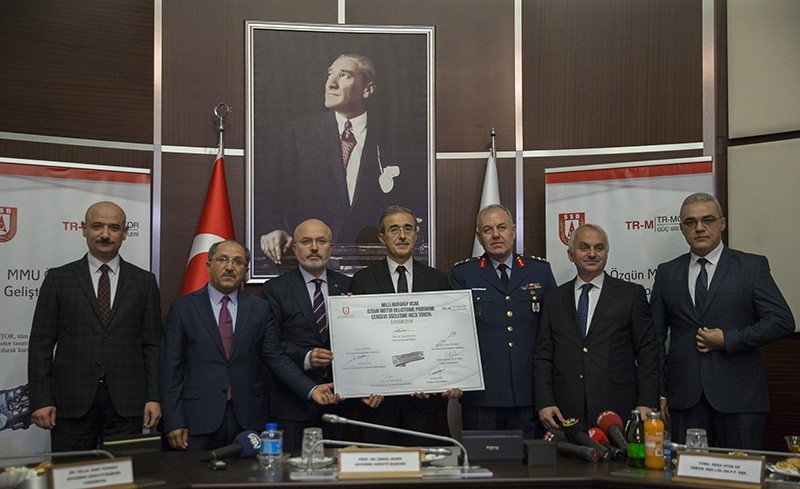 The Presidency of Defense Industries (SSB) and an affiliated company signed a deal Thursday in Ankara in the first step to develop a unique turbofan fighter jet engine in Turkey.

An outline agreement was signed with TR Motor, a company established by the SSB to develop engines which would be used in the TF-X project.

SSB President Ismail Demir said the final goal is that the engine would not face limitations from foreign countries in terms of use and exports, and for Turkey to control all technological features and intellectual property rights.

The door remains open for international engine-makers to get involved in the national fighter jet project, Demir added.

He noted that development of the unique engine will be a long process, nearly 10 years, and today's agreement will serve as a framework in this process.

"Our red line is an engine that belongs fully to us. We will work with those who want to produce an intermediary engine," Demir said.

Turkey has in recent years been working to develop its own defense vehicles, including tanks and combat helicopters, in an attempt to boost its defense capabilities amid militant threats and conflict along its southern borders.

Last year Turkey's Kale Group said it would set up a joint venture company with U.K.-based engineering firm Rolls-Royce to develop aircraft engines including those of the TF-X, Turkey's first domestically made jet. Britain and Turkey signed a deal worth more than 100 million pounds to develop TF-X.

Asked whether Rolls Royce had agreed to comply with the demands, Demir said Turkey would be willing to forego the red lines for a prototype engine, but not for the final product, and added that other international offers would also be evaluated.

Demir also said Turkey was at a stage where it could start mass production of its national Altay tanks, adding that they were looking at a period of 18 months after the signatures for the first delivery.

Anadolu Agency said earlier Thursday that the signing ceremony for the first batch of 250 tanks will be held Friday.

The Altay tank project, led by Turkish commercial and military vehicle producer Otokar, is worth an estimated 7 billion euros ($8.30 billion).

The project aims to replace the main battle tank inventory of the Turkish Land Forces.