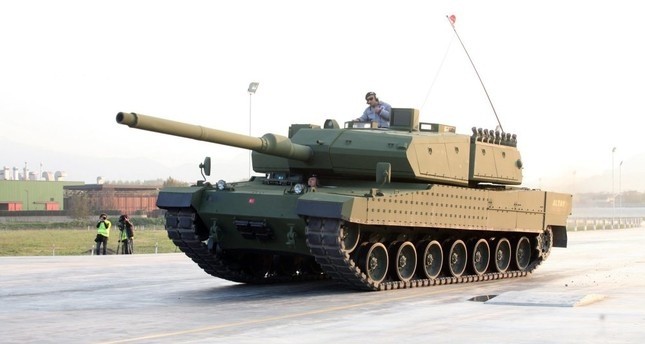 The first domestically developed main battle tank will soon be mass produced after the deal was signed with Turkish defense firm BMC on Friday, and the first tank will be delivered to the military within 18 months

A landmark deal was signed on Friday for mass production of Turkey's first domestically made main battle tank.

The Presidency of Defense Industries (SSB) inked a contract with domestic armored vehicle manufacturer BMC for the mass production of the Altay, a next-generation battle tank.

The first Altay tank will roll off the assembly line within 18 months and will be delivered to the Turkish Land Forces. The contract includes mass production and life-cycle logistical support for 250 units. The financial value of the contract was not revealed.

Within the scope of the mass production process, 40 tanks will be produced in the first phase, after which 210 more tanks with developed armor systems and subsystems will be produced, according to information provided by the SBB.

Furthermore, the Altay tank with an unmanned fire tower is forecast to be developed and produced within the scope of the project.

A number of leading local defense contractors such as Roketsan, Aselsan, Havelsan and the Machinery and Chemical Industry Institute (MKEK) are among the stakeholders of the project.

Addressing the signing ceremony, Defense Industries President İsmail Demir said a cost-effective tank emerged as a result of the negotiations about the mass production process.

Turkey's final target is to achieve domestic production in many projects and systems in the defense industry, Demir continued: "We have to overcome the obstacles in front of Turkey's independent movement. Of course, we are not closing the door to foreign partners, our door is open to those who want to cooperate."

The director said that the engine to be used in the Altay tank will be provided from abroad since engine development activities have only recently started. "The engine will not be developed within the next 18 months when the first tank is produced. Therefore, we are going to use an engine purchased from our foreign partners," he said.

Currently, the Altay's prototype is powered by a 1,500 hp diesel engine from Germany's MTU Friedrichshafen GmbH. Demir said that the Germans have not objected to providing the engine for the tank.

BMC Board of Directors Chairman Ethem Sancak said while participating in the tender, they partnered with an international company, but that they postponed the partnership and that the foreign company will serve as a consultant as part of the partnership.

Sancak did not make any statement about the companies they would work with on the project, but the BMC has a company called Rheinmetall BMC Defense Industry (RBSS), in which the BMC is a partner with the German heavy industry company RheinMetall.

The Altay, Turkey's first main battle tank development program, includes electronic command and control systems, a 120 mm gun and armor, all made by Turkish companies. The prototype for the Altay was unveiled at a 2011 defense show in Istanbul.

In a major development for the defense industry, Istanbul-based BMC on April 24 won the contract to mass produce the country's next-generation main battle tank.

The tank was named after Army Gen. Fahrettin Altay, who commanded the Fifth Cavalry Corps during the Turkish War of Independence.

Studies for a modern battle tank to serve the Turkish Armed Forces (TSK) began at the end of the 1990s. The first stage focused on the production of foreign tanks in Turkey with local partners and searches in that direction continued until 2004.

In May 2004, however, the Defense Industry Executive Committee changed directions and made a key decision to create new supply models based on domestic production and original design, with the maximum use of national resources and facilities for a series of projects, including a modern main battle tank.

Altay, which is set to become the TSK's most important frontline vehicle, will contribute to the country's defense and its defense industry.

Starting off with 250 vehicles, the number is expected to be gradually raised to 1,000, boosting Turkey's ground forces inventory to great extent.

Meanwhile, previous reports said the economic size of the project, spread over more than 20 years, is expected to reach $25 billion to $30 billion.

Classified as a "third-generation advanced" tank, Altay will be equipped with state of the technology, capable of providing all kinds of tactical support for a 21st-century army. Altay holds an edge over other new-generation tanks in the fact that it was developed from a conceptual design stage by taking the present and future combat situations into consideration. The tank is expected to become a critical element for the Turkish military in the future thanks to its excellent mobility, superior firepower and durability.

Altay will have a 120 mm 55-caliber smoothbore gun as its main weapon. Its next-generation fire control system will allow the user to shoot targets in motion with a high accuracy rate. The tank will also feature a 12.7 mm remote-controlled turret and a 7.62 mm tower-mounted firearm for residential areas and fire support.

Meanwhile, a life support system, additional mine protection kit, auxiliary power group, laser warning system and a 360-degree situational awareness system are among the other important elements of the Altay.