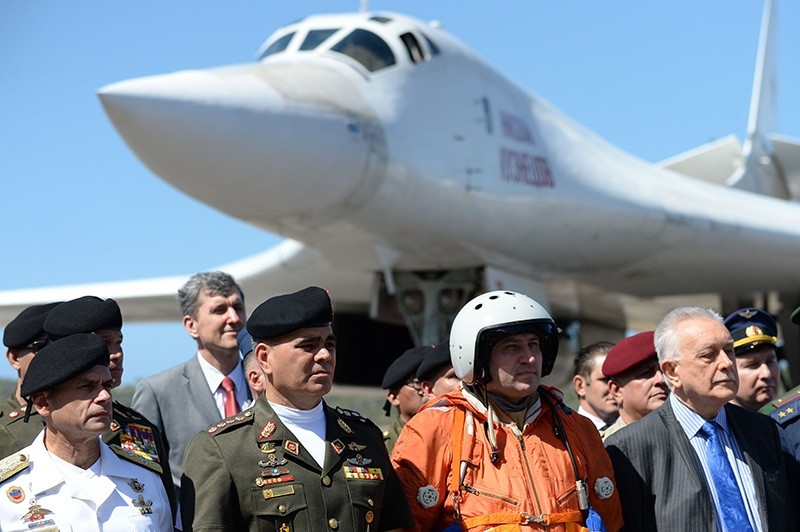 Venezuelan Defense Minister Gen. Vladimir Padrino welcomed about 100 Russian pilots and other personnel after the two TU-160s and two other aircraft landed at the Maiquetia International Airport in Caracas.

Padrino said the deployment showed "we also are preparing to defend Venezuela to the last inch when necessary."

"This we are going to do with our friends, because we have friends in the world who defend respectful balanced, relations," he said.

The commander of the Russian Airforce's long-range aircraft, General Sergei Ivanovich Kobulash, said the exercises would provide "a profound exchange of experience between pilots and technical staff" from both countries.

The development follows a visit to Moscow last week by President Nicolas Maduro during which he had talks with Russian President Vladimir Putin, who expressed support for his beleaguered government.

Maduro often accuses the United States of plotting against his government, which has overseen the plunge of a once-rich petro state into a severe economic crisis.

Besides the two bombers, the deployment included an An-124 transport plane and an Il-62 passenger plane, according to a Russian military announcement in Moscow.

Padrino noted that Russian aircraft had visited before in 2013, but said their current deployment was part of a "new experience."

He said exercises would be held to "raise the level of interoperability of the aerospace defense systems" of both countries.

It was unclear how long the Russian deployment would last, and Padrino did not provide details about the exercises planned.

In recent years, Venezuela has purchased millions of dollars in military equipment from Russia, he said.

In a strong reaction, U.S. Secretary of State Mike Pompeo said in a tweet: "The Russian and Venezuelan people should see this for what it is: two corrupt governments squandering public funds, and squelching liberty and freedom while their people suffer."

"To make such statements about the country, half of the defense budget of which can feed the whole of Africa, is not quite appropriate," Peskov said.

He added that U.S. President Donald Trump would soon assess Pompeo's words, hinting at a recent tweet in which he called Rex Tillerson, the former secretary of state, "dumb as a rock and lazy as hell."

"As we know, over time, the president of the U.S. gives an assessment of the secretaries of state, maybe such an assessment will follow in relation to such non-diplomatic remarks of Mr. Pompeo too," he said.

Maduro on Sunday said Washington had set in motion a plan to overthrow him, with the support of neighboring Colombia.

"Underway today is an attempt to disrupt the democratic life of Venezuela, coordinated directly from the White House," said Maduro, who was the target of an Aug. 4 drone attack blamed on Venezuela's opposition with the support of the U.S. and Colombian governments.

Caracas' defense minister said "nobody in the world should fear the presence of these strategic fighter bombers. We are builders of peace and not of war."

Padrino added however that other countries in the region had created "political and military imbalances" against which the Venezuelan government could not stand idly by – an apparent reference to Bogota, which Caracas has accused of harboring U.S. military bases.

President Recep Tayyip Erdoğan visited Caracas at the beginning of the month, expressing his support for Venezuela and Turkey's intentions to deepen bilateral ties.

"There are solid ties in friendship and solidarity between our countries. We have strong potentials in our economic relations with Venezuela. We are making efforts to diversify and deepen cooperation with Venezuela in every field through win-win understanding," Erdoğan said at a business forum in Caracas.

Erdoğan's trip was the first visit by a Turkish president to Venezuela.