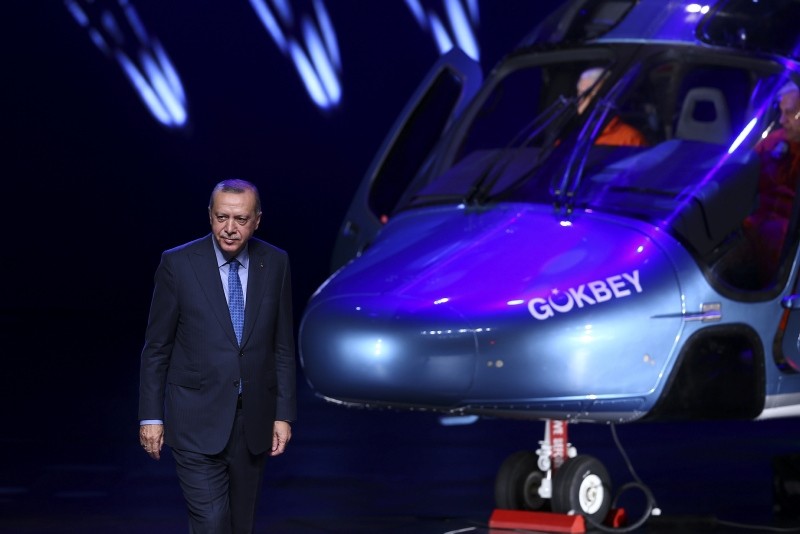 Turkey has witnessed major breakthroughs in its defense industry over the last 16 years and has seen great expansion with the development of new land, maritime and aviation systems, while maintaining work on new important products that have resulted in the country coming to the fore in the international defense arena.

The ongoing efforts of the Turkish defense industry and qualified engineers have resulted in the development of a multipurpose helicopter, the TAI T625, which recently successfully performed its maiden flight and will begin mass production in 2021.

At a grand ceremony in Ankara Thursday that launched the Turkish Defense Industry Summit held under the auspices of the Presidency, President Recep Tayyip Erdoğan announced the name of Turkey's first indigenous multi-role helicopter, the T625, as Gökbey, a name agreed upon after much consultation. 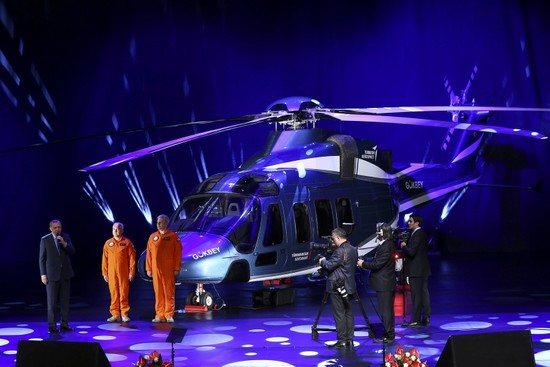 "We successfully carried Turkey to a growth spurt [in the defense field]," Erdoğan said at the summit in a detailed explanation of the growth of the Turkish defense industry.

Turkey has increased the locality rate in the defense industry from 20 percent to 65 percent, the president noted.

Mentioning other major defense projects, he said, "Indigenous Kasırga, Bora and Som missiles are now in the mass production phase and our work continues on new models."

The president also said that Turkey would get the upper hand by producing indigenous, long-range missiles of which test-firings have been completed.

"We will not stop until Turkey can develop and produce all the strategic needs of the defense industry," Erdoğan stressed.

Turkey pursues 650 defense industry projects worth $60 billion, he said. "Three of them are directly technology, development and research centers and their projects. Serial production, prototype development and subsystem design are among our priorities. We are implementing all kinds of regulations, measures and incentives necessary to complete these studies quickly and successfully," the president noted.

With regard to Turkey's other indigenous aircraft, he said Turkey will improve its T129 Advanced Attack and Tactical Reconnaissance Helicopters (ATAK) and the country's efforts to develop an indigenous warplane are ongoing.

"Having money based only on natural resources or trade doesn't guarantee your freedom if you haven't reached a certain level in the defense industry," he asserted.

Saying that the Turkish private sector, such as leading unmanned aerial vehicle developer Baykar Makina, produced unmanned and armed air vehicles, he underlined it will go further and produce more powerful ones.

The T625 is a multipurpose helicopter developed by Turkish Aerospace Industries (TAI) as part of the Original Helicopter Program, coordinated by the Presidency of Defense Industries.

The aircraft was developed as part of a contract inked between TAI and the Undersecretariat for Defense Industries (SSB, formerly SSM), in September 2013 to develop an indigenous light multi-mission helicopter to meet the general-purpose helicopter requirements of the Turkish Armed Forces (TSK) and civilian authorities.

The Gökbey helicopter is being developed for both domestic and international markets.

Power for the T625 prototype comes from a pair of LHTEC (a Rolls-Royce & Honeywell Partnership) CTS800 4-AT turboshaft engines, 1,373 shaft horsepower (shp) each.

The production unit will, however, be powered by two TS1400 turboshaft engines, which are being developed domestically by TUSAŞ Engine Industries Inc. (TEI). The company is currently working on its first turboshaft helicopter engine TS1400, which successfully finished its first test in June.

The Turboshaft Engine Development Project (TEDP) looks to decrease the dependence on foreign sources while enabling domestic production of engine systems, which constitute one of the most important components of these projects, and increasing the percentage of indigenous production in these projects.

Once all tests are complete, the Gökbey will start flying with a domestic engine.

The platform has a five-bladed main rotor and a four-bladed tail rotor to minimize vibration and noise. Both main and tail rotor hubs are fully articulated with elastomeric bearings. Both rotor systems are driven by a transmission system that consists of the three-stage main gearbox that is able to operate for 30 minutes in the event of loss of lubrication.

The helicopter is designed for two crew and 12 passengers. The large cabin space can be arranged to meet various operational needs, such as VIP transportation, ambulance and search and rescue operations.

TAI produced all of the aircraft's body, powertrain, rotor system, landing gear and autopilot systems. In addition, the helicopter's avionics systems were designed and produced domestically.

The T625 helicopter made its maiden flight in early September when the twin-engine helicopter flew for 20 minutes at TAI's facility in the capital Ankara, during which an initial assessment of the general flight characteristics, transmission and rotor systems was carried out.

Mass production of the T-625 is expected to begin after 2021. Civil certification process of the helicopter is ongoing with the Turkish Directorate General of Civil Aviation and the European Aviation Safety Agency (EASA).

Meanwhile, engine manufacturing, design and production in Turkey is gaining speed as part of the 100-day action plan announced by President Erdoğan in which manufacturing fully local-made engines was set as a goal.

Furthermore, the Original Helicopter Program, the project to manufacture Turkey's first locally made helicopter, was initiated under the leadership of the SSM in 2013 and is maintained by TAI.

Also speaking at the summit, SSB Chairman İsmail Demir announced that there would be a visit to an eastern Asian nation on Monday next week to take the final step in exporting T-129 ATAK attack helicopters, which have become one of the prominent export items for the defense industry.

Even though Demir did not disclose the buyers, previous reports suggested that the Philippines is interested in buying ATAK helicopters.

The Philippine Air Force was planning to purchase 24 attack helicopters as part of the Attack Helicopter Acquisition Project, but reduced the number due to budgetary concerns.

Turkey previously inked an agreement with Pakistan for the sale of 30 ATAK helicopters.

Moreover, earlier this month TAI said it applied for a license related to the export of said helicopters to Pakistan, and the firm expects to receive the license in a short while.

Designed for challenging climates and geographic conditions, the helicopter is used in the inventory of the Turkish Armed Forces and the Ministry of the Interior. ATAK is one of the most important players in the competition in global markets for its features.

Given the export performance of the industry, which has maintained a course over $200 million in recent years, the $2 billion threshold is expected to be exceeded by year-end.