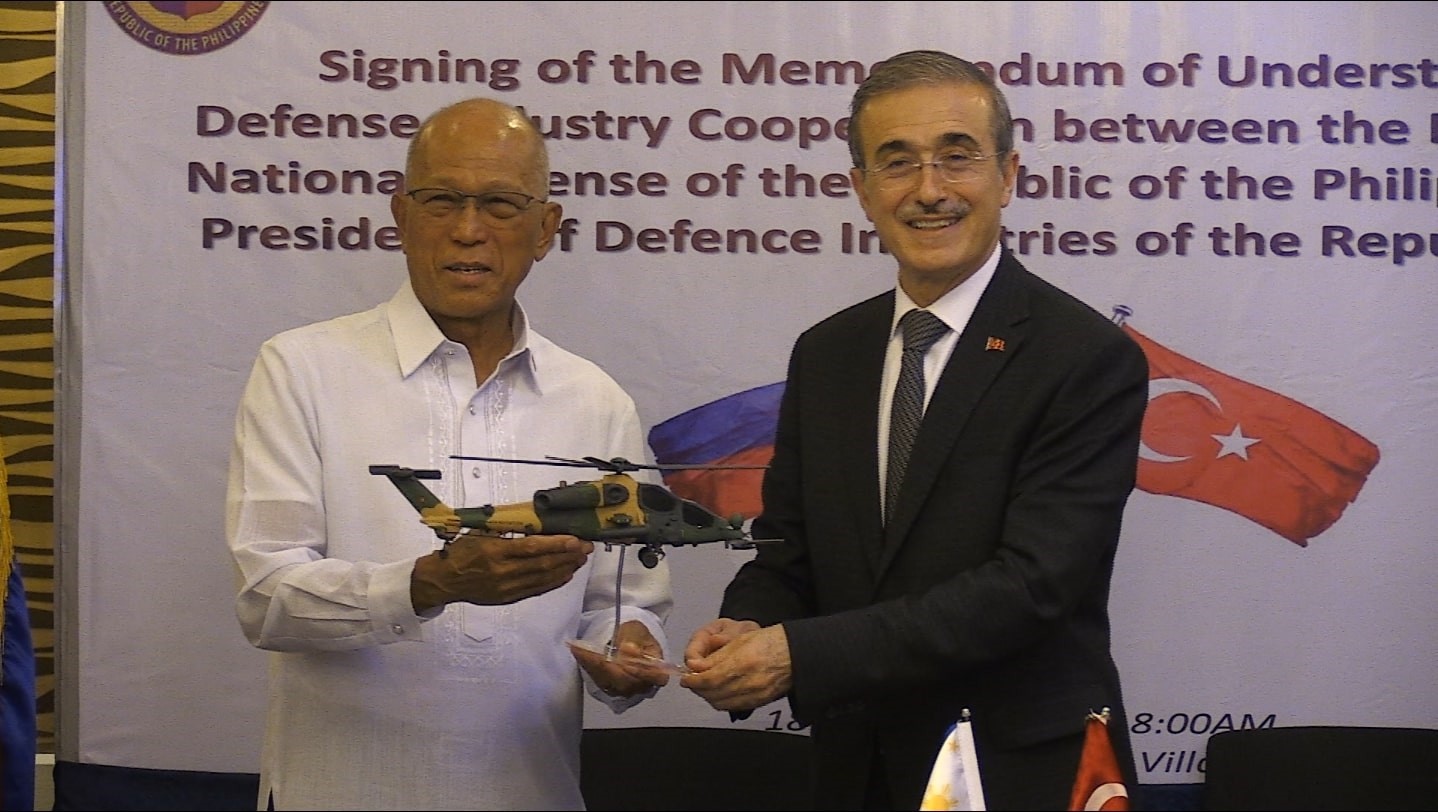 Working to ambitiously grow its export markets with diversified platforms, the Turkish defense industry is now preparing to export its domestically developed ATAK helicopter to the Philippines

The domestically developed ATAK T129 Advanced Attack and Tactical Reconnaissance Helicopter recorded Turkey's largest single defense export when Turkey and Pakistan inked a deal for 30 of them in July. Now, the homegrown helicopter is eyeing the same success with the Philippines. Yesterday, a Turkish delegation paid a visit to the Southeast Asian country and signed a memorandum of understanding on defense cooperation at a ceremony held at Villamor Air Base. Defense Industries President İsmail Demir and Philippines Defense Secretary Delfin Lorenzana attended the signing ceremony.

The memorandum of understanding has paved the way for broadening defense cooperation and the trade of military platforms between Turkey and the Philippines. The agreement will also facilitate the export of the ATAK helicopter to the country.

Last week, Filipino Defense Secretary Lorenzana announced that the Philippine Air Force has chosen the ATAK T129, adding that their budget could afford eight to 10 units.

Following the ceremony, Defense Industries President Demir stressed that the memorandum of understanding has provided a platform for the sales of Turkey's defense platforms to the Philippines as well as bilateral technical cooperation.

"Now we are devising a number of projects in the Turkish defense industry. So far, we have sold the Philippines ammunition, night vision goggles and the sales still continue. But, the export of larger military platforms like the ATAK helicopter, unmanned aerial vehicles and national warship MİLGEM," Demir said.

Though the visit particularly featured the sale of ATAK helicopters, Demir stated, the defense authorities of both countries assessed the trade of air, maritime and land platforms including tanks and modernization of armored tanks, training vehicles, drones and multipurpose helicopters.

Demir highlighted that the national defense policy Turkey has been implementing with dedication in recent year draws worldwide attention.

The president of the defense industries emphasized that the first concrete step of the agreement with the Philippines will be the export of the ATAK, a helicopter with an outstanding performance on global platforms.

Developed from the combat-proven AgustaWestland A129CBT, the new aircraft incorporates a new system philosophy with a new engine - the LHTEC CTS 800-4A - new avionics, sight systems and weapons, a modified airframe, an uprated drive train and a new tail rotor.

A series of talks have been held with various countries, including Pakistan, for the export of ATAK helicopters, which have proven themselves during operations with their superior capabilities. In this context, ATAKs have participated in various international events as part of these efforts to showcase its capabilities.

Recently, TAI's Corporate Marketing and Communications Head Tamer Özmen said that the company applied for a license to export 30 ATAK helicopters to Pakistan and the firm expects to receive the license in a short while.