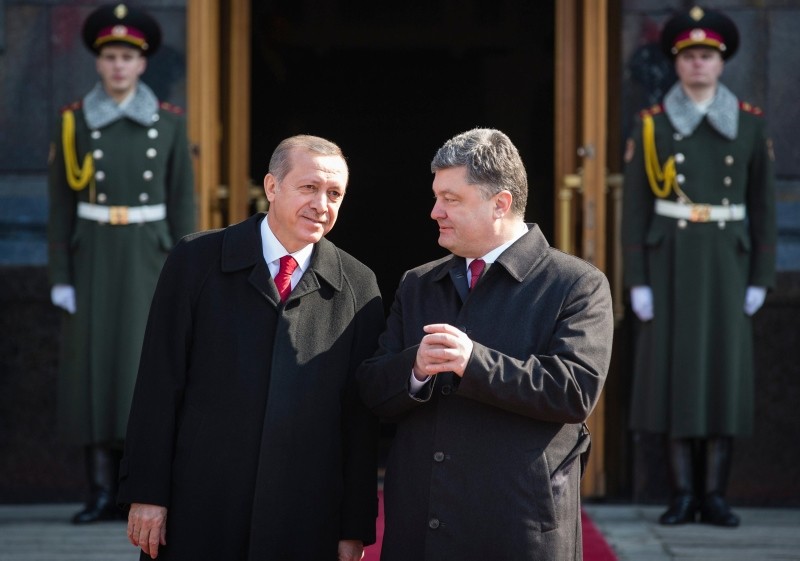 Ukrainian President Petro Poroshenko said Saturday that he had signed an agreement on the purchase of 12 Turkish Bayraktar Tactical Block 2 (TB2) unmanned aerial vehicle (UAVs) for the Ukrainian army.

"As we previously agreed with President Recep Tayyip Erdoğan, we signed an agreement on purchasing Turkish armed drones Bayraktar TB2s for the Ukrainian army," he wrote on Twitter.

"These newest attack drone will aid the army on operational and tactical levels, and besides having high-tech characteristics, can be equipped with additional modern high-accuracy missile systems to destroy armored units or marine targets with fortified positions," Poroshenko added.

According to information obtained by Anadolu Agency, Turkish UAV manufacturer Baykar will produce six Bayraktar TB2s and deliver them to Ukraine in a year.

Along with the UAVs, three ground control station systems and equipment will also be delivered.

The agreement was signed between the Ukrspetsproject company, which is part of Ukrboronprom, and Baykar Makina. According to Poroshenko, the agreement is part of measures to expand military-technical cooperation between Ukraine and Turkey.

The Bayraktar TB2 armed drones, produced by Baykar and operationally used since 2015, have continued to support the fight against terror in other regions while providing effective surveillance, reconnaissance and fire support to the security forces in the Operations Euphrates and Olive Branch. Bayraktar TB2 UAVs have played an active role in detecting, diagnosing and neutralizing thousands of terrorists to date.

The drones were developed and produced locally. With its advanced electronics, software, aerodynamic, design, submain systems, as well as flight automation and performance, the Bayraktar TB2 stands out as one of the most advanced UAV systems in its class.