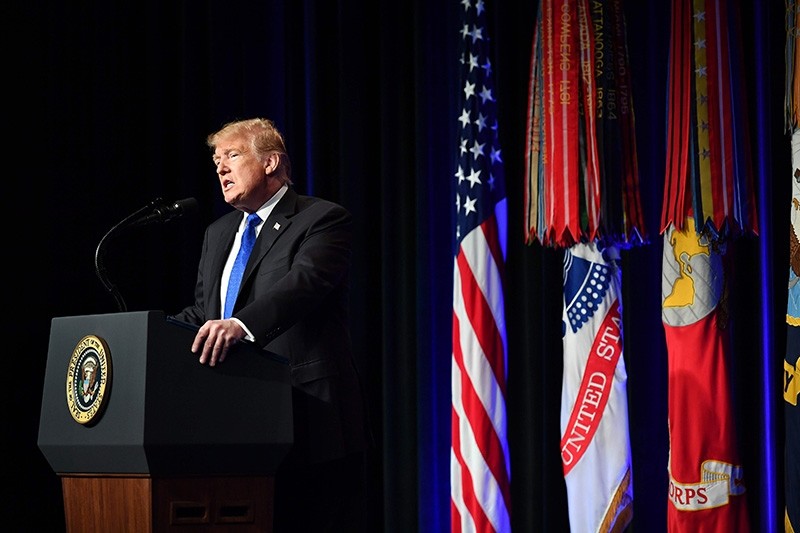 U.S. President Donald Trump speaks during the Missile Defense Review announcement at the Pentagon in Washington, D.C. on Jan. 17, 2019. (AFP Photo)
by Compiled from Wire Services Jan 17, 2019 12:00 am

U.S. President Donald Trump vowed Thursday to boost America's missile defense systems, including by investing in technology to protect against the threat of sophisticated "hypersonic" weapons.

Speaking at the Pentagon, Trump unveiled the Missile Defense Review, a long-awaited analysis of the defensive network of U.S. interceptors that are designed to shoot down an incoming ballistic missile.

Trump did not mention Russia, China or North Korea in his roughly 20-minute speech. But the Pentagon's new strategy makes clear that its plan for a more aggressive space-based missile defense system is aimed at protecting against existing threats from North Korea and Iran and countering advanced weapon systems being developed by Russia and China.

"The U.S. will now adjust its posture to defend against any missile strikes including cruise and hypersonic missiles," Trump told the military audience.

"We will terminate any missile launches from hostile powers or even from powers that make a mistake. It won't happen, regardless of the missile type or geographic origins of the attack."

Flying at low altitude, many times the speed of sound, and able to change direction, hypersonic weapons don't follow a ballistic arc so are much harder to track and cannot currently be intercepted.

As a result, the Pentagon is urgently looking at ways to enhance its ability to track hypersonic missiles, primarily by using existing sensors that are deployed in space.

"These new technologies produce new threats, and these threats are harder to see, harder to track and harder to defeat," Acting Defense Secretary Patrick Shanahan said.

"To our competitors: we see what you are doing and we are taking action."

Trump blasted Iran for developing missile technology but notably, he did not mention North Korea, which has developed a ballistic missile arsenal and has conducted several nuclear tests.

Trump ordered the missile defense review in 2017, amid heightened tensions with Pyongyang over its nuclear program -- the first such review of America's ballistic defenses since 2010.

The U.S. is looking at putting a layer of sensors in space to more quickly detect enemy missiles when they are launched, according to a senior administration official, who briefed reporters Wednesday. The U.S. sees space as a critical area for advanced, next-generation capabilities to stay ahead of the threats, said the official, who spoke on condition of anonymity to disclose details of the review before it was released.

The administration also plans to study the idea of basing interceptors in space, so the U.S. can strike incoming enemy missiles during the first minutes of flight when the booster engines are still burning.

Recognizing the potential concerns surrounding any perceived weaponization of space, the strategy pushes for studies. No testing is mandated, and no final decisions have been made.

Congress, which ordered this review, already has directed the Pentagon to push harder on this "boost-phase" approach, but officials want to study the feasibility of the idea and explore ways it could be done.

The new strategy is aimed at better defending the U.S. against potential adversaries, such as Russia and China, who have been developing and fielding a much more expansive range of advanced offensive missiles that could threaten America and its allies. The threat is not only coming from traditional cruise and ballistic missiles, but also from hypersonic weapons.

For example, Russian President Vladimir Putin unveiled new strategic weapons he claims can't be intercepted. One is a hypersonic glide vehicle, which could fly 20 times faster than the speed of sound and make sharp maneuvers to avoid being detected by missile defense systems.

Current U.S. missile defense weapons are based on land and aboard ships. Trump and Vice President Mike Pence have both emphasized space-based capabilities as the next step of missile defense.

Senior administration officials earlier signaled their interest in developing and deploying more effective means of detecting and tracking missiles with a constellation of satellites in space that can, for example, use advanced sensors to follow the full path of a hostile missile so that an anti-missile weapon can be directed into its flight path.

Any expansion of the scope and cost of missile defenses would compete with other defense priorities, including the billions of extra dollars the Trump administration has committed to spending on a new generation of nuclear weapons. An expansion also would have important implications for American diplomacy, given long-standing Russian hostility to even the most rudimentary U.S. missile defenses and China's worry that longer-range U.S. missile defenses in Asia could undermine Chinese national security.

Asked about the implications for Trump's efforts to improve relations with Russia and strike better trade relations with China, the administration official said the U.S. defense capabilities are purely defensive and the U.S. has been very upfront with Moscow and Beijing about its missile defense posture.

The release of the strategy was postponed last year for unexplained reasons, though it came as Trump was trying to persuade North Korea to give up its nuclear weapons.

While the U.S. continues to pursue peace with North Korea, Pyongyang has made threats of nuclear missile attacks against the U.S. and its allies in the past and has worked to improve its ballistic missile technology. It is still considered a serious threat to America. Iran, meanwhile, has continued to develop more sophisticated ballistic missiles, increasing their numbers and their capabilities.