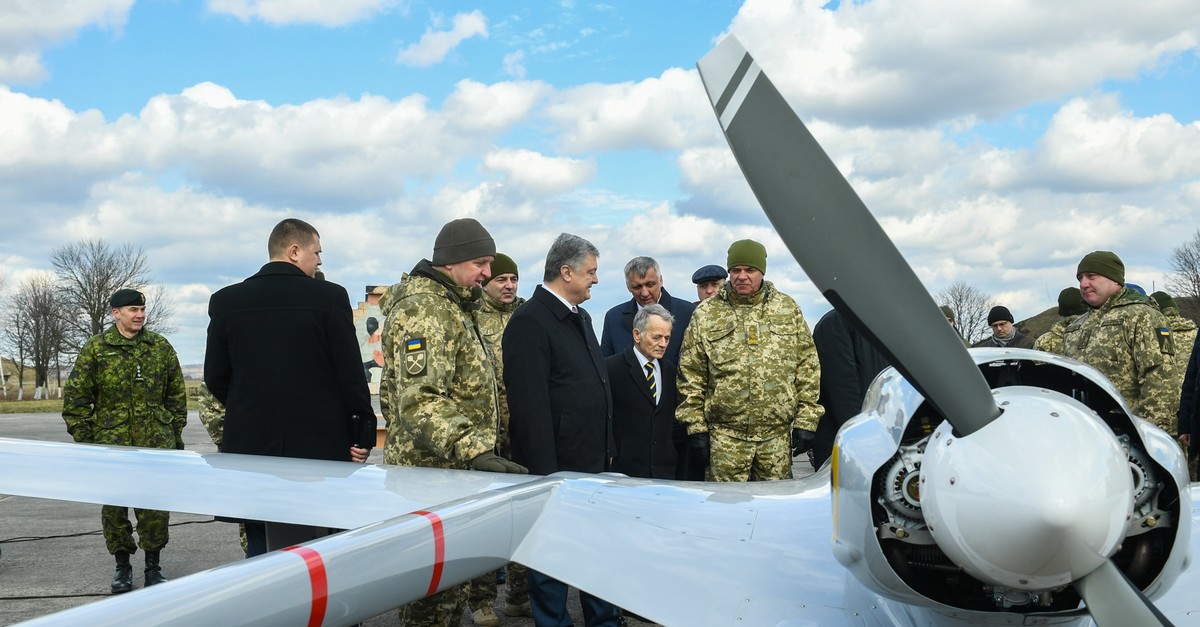 Ukraine's President Petro Poroshenko during the official delivery ceremony of the Bayraktar TB2 combat drones to the Ukrainian Armed Forces. (Photo courtesy of the Presidential Administration of Ukraine)
by Daily Sabah Mar 20, 2019 1:40 pm

"I congratulate the Ukrainian Armed Forces and our partners from Turkey, as well as all Ukrainians. Today we acquired a completely new modern weapon," said Poroshenko, who personally oversaw the tests in western Khmelnytskyi region.

He added that the Bayraktar TB2 drones were an "excellent" contribution to the strengthening of Ukraine's defensive capabilities amid the ongoing war against Russian-backed separatists in the country's east.

Delivering the UAVs to the Ukrainian army, the president said special operations forces, paratroopers, motorized troops and other military units would use the drones.

Poroshenko, who faces a tough re-election bid at the end of the month, livestreamed the tests on his Facebook page.

Ukraine announced the agreement to purchase 12 TB2 UAVs in January.

The Bayraktar TB2 armed drones, produced by Baykar and operationally used since 2015, have continued to support the fight against terror in other regions while providing effective surveillance, reconnaissance and fire support to the security forces in the Operations Euphrates and Olive Branch. Bayraktar TB2 UAVs have played an active role in detecting, diagnosing and neutralizing thousands of terrorists to date.

The drone was developed and produced locally. With its advanced electronics, software, aerodynamic, design, submain systems, as well as flight automation and performance, the Bayraktar TB2 stands out as one of the most advanced UAV systems in its class.