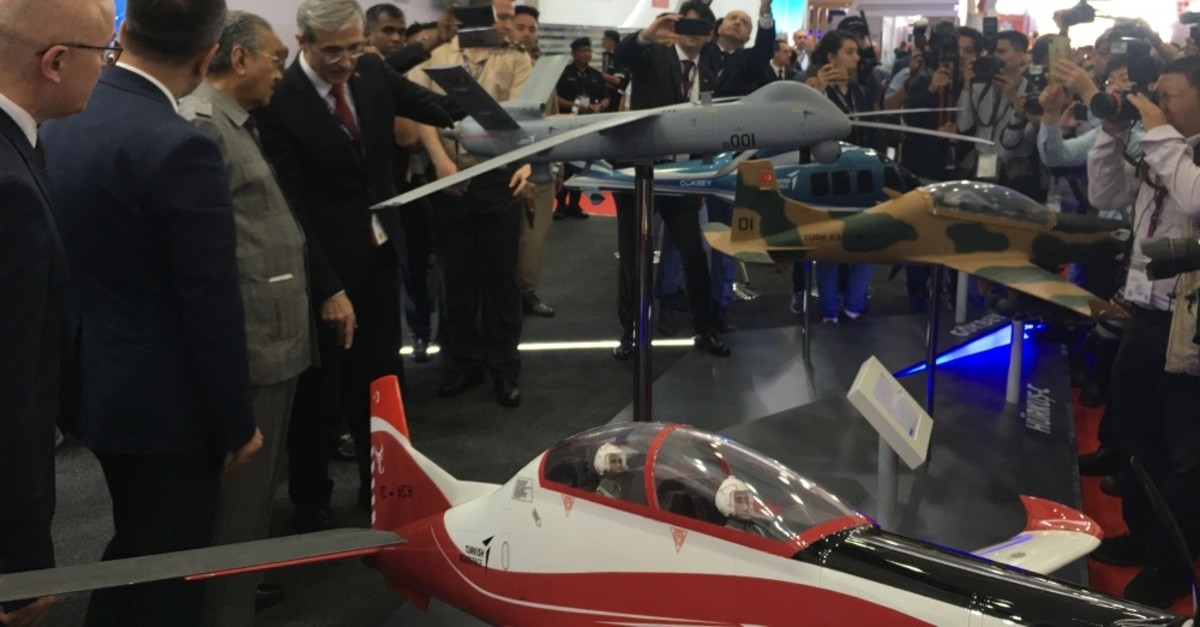 Having gone through a profound transformation to domestically manufacture a series of military platforms, the Turkish defense industry has inked a number of export deals at international defense fairs and events over the recent years.

Posting an all-time high in exports in 2018, Turkey's defense industry now wants to set the export target of over $3 billion for this year, according to Presidency of Defense Industry (SSB) Chairman İsmail Demir.

Demir's remarks came on the sidelines of another major international event, the 2019 Langkawi International Maritime and Aerospace Exhibition (LIMA 2019), in Malaysia.

Leading companies in the Turkish defense industry are showcasing their products and services at the event, which is the Asia-Pacific Region's most important exhibition in its field.

On the sidelines of the fair, a memorandum of understanding on cooperation was signed between Turkish Aerospace Industries (TAI) and the Malaysian Aerospace Industry Association, followed by another deal inked between one of the leading Turkish defense manufacturers, ROKETSAN, and Pyrotechnical Ordnance Malaysia SDN.BHD.

Demir was quoted by Anadolu Agency (AA) as saying that Malaysia and Southeast Asia are among the target regions in terms of export and cooperation for the defense industry, stressing the importance of knowing the point the Turkish defense industry has reached so far in exports.

Turkey's total defense and aerospace exports saw a 35.3 percent year-on-year increase in the first two months of this year, reaching $346.5 million, according to the Turkish Exporters' Assembly (TİM).

As a result of accelerating efforts, sector export performance in 2018 increased by 17 percent compared to 2017. The industry broke its own record of $1.7 billion in November and moved the record to $2.03 billion at the end of the year.

"There is not much information and awareness in these regions regarding the Turkish defense industry," he said. "Turkish defense industry companies have a great place and attract attention in this fair during which we expect to have opportunities for our defense industry's achievements and our capabilities to be seen, to be known and to be exhibited, along with export and cooperation in various subjects."

Demir also provided information on the deals inked by TAI and ROKETSAN. He pointed out that TAI signed a cooperation agreement on defense and aerospace with a platform that unites aviation companies in Malaysia. "The agreement includes cooperation on various fields, such as mutual product exchange, exchange of information, co-production and joint activities, for the purpose of creating synergy by taking advantage of each other's capabilities. We believe that this will be of great benefit," he added.

He said that ROKETSAN signed a cooperation agreement with a state company in Malaysia that mainly works on rocket fuels and explosives, stressing that this cooperation will bring negotiations on technology sharing, co-production and the development of some products between the two countries to a new level.

Noting that the use of products and systems developed in the defense industry is very important to exceed the targeted threshold, he added the use and visibility of some capabilities, unmanned aerial vehicles (UAVs), armed UAVs, and precision-guided munitions in various operations attracted a great deal of attention.

"Our platforms, including air defense, aircraft and other products, will become even more appealing when they come into use or prove themselves in a variety of tests," he said. "There is a big difference between explaining a subject conceptually and showing the performance of that product in the field. You are making a much larger impact in the context of 'seeing is believing.' This will be of more interest for your possible customers. In this sense, using the products and showing their performance in the field is of great significance."

Malaysian Prime Minister Mahathir Muhammed visited Turkish companies' stands at the opening and on the second day of the exhibition.