Eyeing $2.5B in exports, defense industry to showcase ambitious products at IDEF'19 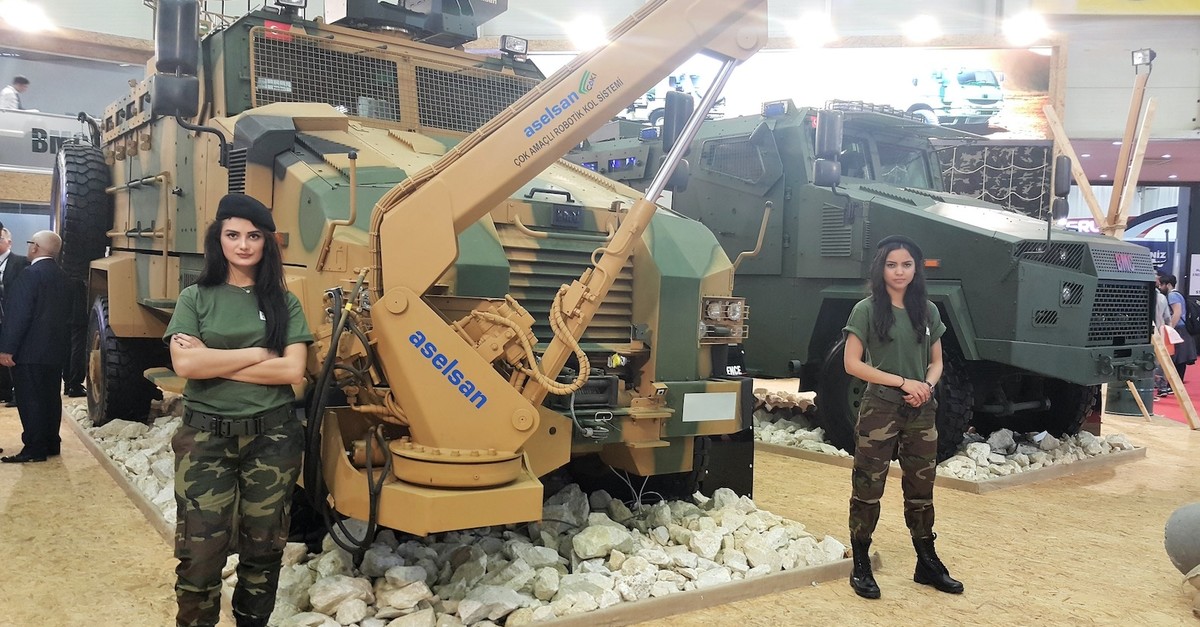 Having reduced foreign dependency in the defense sector to 35 percent from 80 percent recently and making a name for itself around the world with recent breakthroughs, the Turkish defense industry aims to reach $2.5 billion in defense industry exports this year.

The International Defense Industry Fair 2019 (IDEF'19), which has become one of the region's most important fairs held every two years in Turkey, will kick off in Istanbul on Tuesday. The fair will bring together public and private sector players, as well as foundation companies such as ROKETSAN, HAVELSAN and ASELSAN. Domestic companies operating in the private sector will be at the fair with their products.

IDEF'19 will be held under the auspices of the Turkish Armed Forces Foundation at the TÜYAP Fair and Congress Center from April 30 to May 3.

Turkey's defense industry, which broke a record in 2018 with an order amount of $12.2 billion and an export figure of over $2 billion, will be debuting in the national and international arena at IDEF'19 with its leading companies and ambitious products. In addition to products for land, air and sea platforms, studies in the field of the space industry will also be showcased at IDEF'19 which will be joined by some 1,000 domestic and foreign companies. A number of products, from new combat management systems to new-generation tank destroyers, will be exhibited at the fair, which will take Turkey one step further in international competition.

The communication terminal, developed as part of the Marine Tactical Wireless Network (DETTA) project initiated by the Defense Industry Presidency in accordance with the requirements of the Naval Forces Command, will be one of the new products to be exhibited at IDEF'19. The terminal will ensure that warships are part of the Turkish Armed Forces Integrated Communications System at sea as in port. In this way, warships can remain in the network even while operating. The first demo of the communication network, developed by the Onur engineering company as a continuation of the project for the Coast Guard Command's boats, part of the SahilNet project, will be at IDEF'19. The New Generation Network-Assisted Data Integrated Combat Management System (ADVENT SYS), which enables Navy Command elements to manage from a single center, will also be showcased at IDEF'19 for the first time. It will be installed for the first time in the TCG Kınalıada, the fourth ship of the MİLGEM (National Ship) project. The Tulpar Light Tank, developed by Otokar, will be exhibited at IDEF'19 for the first time in Turkey. The company produced the vehicle for the Turkish Armed Forces' possible need for new-generation armored infantry combat vehicles. 105-millimeter artillery can be integrated into the vehicle, which is on the verge of being exported to three countries. Lightweight class tanks, which operate in reconnaissance and fire support, have come to the fore due to changing wartime conditions. It is likely that the vehicle will have another medium-caliber weapon and a 30-35-millimeter tower.

At the fair, ASELSAN will exhibit the Sarp-L, one of the newest members of the remote-controlled weapons system family exported to 19 different countries. With its small size and low weight, the system can be used in a variety of wheeled or tracked armored combat vehicles, stationary facilities and also on wireless platforms thanks to wireless service capabilities. Sarp-L enables automatic target detection and accurate shooting in day and night conditions.

The ALKAR 120mm mortar weapon system, the new mainstay of Turkish troops, will also be on display for the first time. ALKAR 120, Turkey's first national automatic mortar system, has been originally designed by ASELSAN.